HORRIFYING footage captured the moment an “insane” driver tried to overtake at speed – and collided with vans on both sides of the road.

The blue Ford flies across hatched road markings, skimming between two busy lanes of traffic – clipping a van on the left and then spinning directly into another one on the other side of the road.

The driver caused carnage on the A76 near Kilmarnock, sending debris spinning across the road. Luckily no-one was injured as a result.

The disturbing incident took place in July 2016, but the footage has only emerged now as Police Scotland refused to release the driver’s details or the sentence he was given.

Yesterday (MON), police confirmed the driver had pled guilty to road traffic offences in court in June last year but would give no further details.

Road safety campaigners have slammed the “insane” and “reckless” driver for putting others at such high risk.

However, they also criticised police for withholding information from the public – fearing the driver may have been given a lenient sentence.

This has raised concerns over why the driver was not named and the sentence made public as a deterrent to others.

The footage was captured by Intelligent Telematics, who supply camera equipment to HGVs and other vehicles.

The clip begins with the HGV driving down the A76, with heavy traffic on both sides of the road.

There are visible road hatchings in the centre of the road, but within seconds a blue vehicle going at at least 70mph recklessly speeds down them.

As the hatchings taper off, two lines of backed up traffic still fill both sides of the road – however the driver makes no moves to slow down or pull in.

After overtaking the HGV and another car in front, the blue vehicle smacks hard into the side of a white van on the left hand side of the road.

This immediately sends the car spinning across the other side of the road – directly into the side of an oncoming van.

The impact shunts the van off the road into a grass verge, as one of the van’s tyres can be seen bounding onto the verge, while pieces of metal spin in the air. 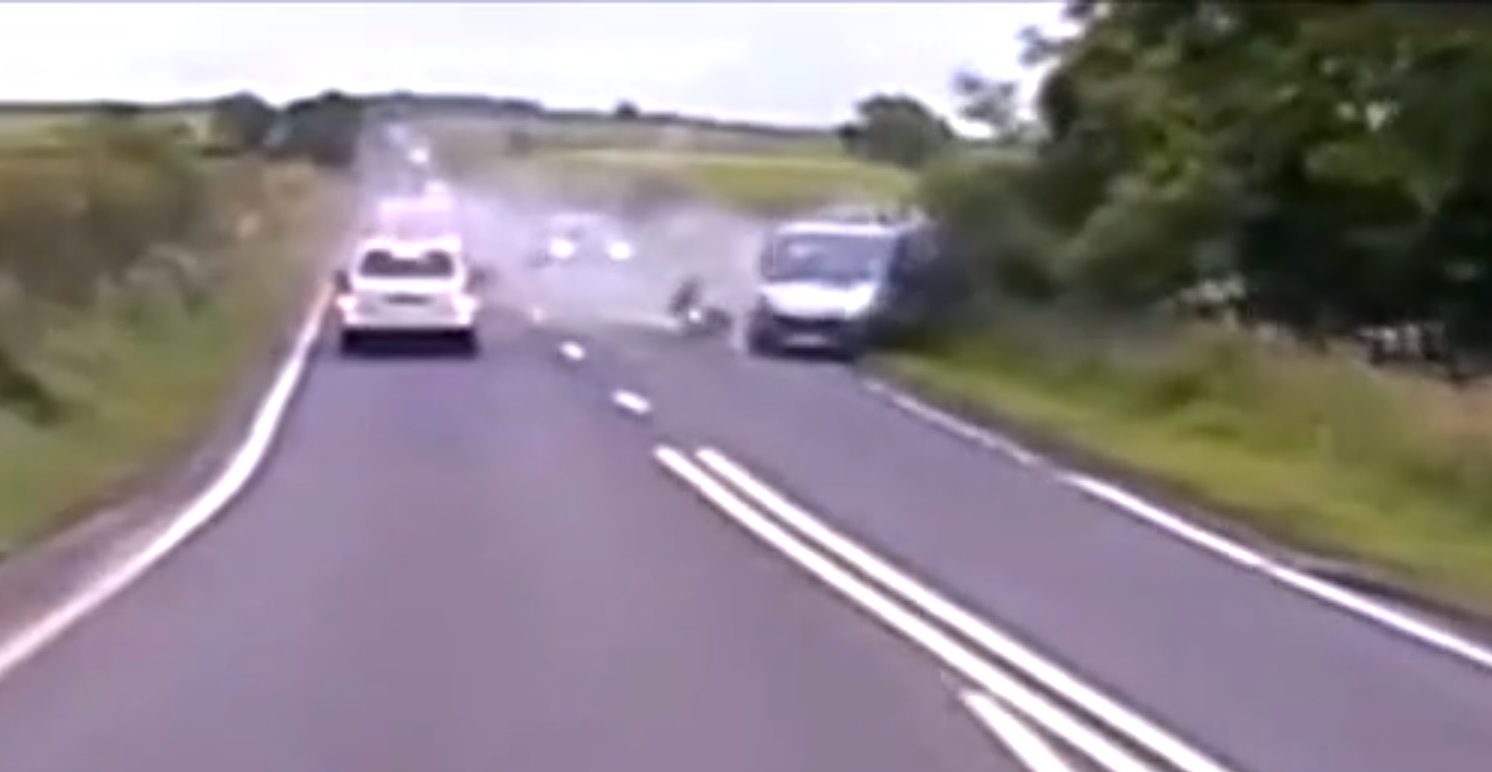 The collision caused multiple other vehicles to stop in fear as pieces of metal and bodywork from the vehicles involved became strewn all over the road.

The reckless driver pled guilty to road traffic offences, but the sentence they were given is not known.

Sam Footer, of Intelligent Telematics, said: “Reckless driving, such as this crazy overtaking, represents a huge risk to all road users.”

A spokesman for SWD Media, who obtained the footage, said: “The moment this driver chose to carry out this insane manoeuvre he risked the lives of everyone on the road that day.

“It clear from the aftermath and debris that it’s a miracle no one was seriously injured in this moment of insanity.

“I’m pleased he decided to plead guilty, however the lack of details released by Police is concerning.

“It is the public interest to know the identity of this reckless driver and at the very least the punishment he received to serve as a deterrent to others.

“I fear the consequences for this driver were too lenient, and quite frankly an embarrassment to the authorities and justice system.”

RAC spokesman Simon Williams said: “This is one of the most frightening displays of dangerous driving you are ever likely to see. The driver clearly has no thought for the safety of anyone else on the road, let alone themselves. We hope they have been appropriately punished.”

Police confirmed that a 23-year-old man pled guilty to road traffic offences in June last year, but would not provide the man’s name or any details which would allow the sentence he was given to be uncovered.

The reasoning police gave was that the road policing unit could not identify the number plate in the video and could not confirm that the vehicle was the same one. Despite the accident happening at the same time, same day and on the same stretch of road.

A spokesman for Police Scotland said: “A 23-year-old man was referred to the Procurator Fiscal.”