WATERSTONES have been condemned for opening a new store “masquerading” as an independent book shop.

The chain has promised not to compete directly with existing independent book stores.

But they have been branded “shameful” for plans to open a “copycat indie” in Edinburgh next year.

The store, called “Stockbridge Books”, will be just half a mile from an established independent, Golden Hare Books.

The firm has previously been criticised for opening similar “incognito” book shops which do not have the distinctive Waterstones branding in England.

Stockbridge Books, due to open in Spring next year, is believed to be the firm’s first foray into an independent-style store in Scotland.

The plans have faced fierce criticism since the news was announced on Monday.

Golden Hare Books took to Twitter to vent their frustration at the announcement, writing: “Despite [Managing Director] James Daunt and Waterstones’ open promise that their copycat indies would only open in areas with no independent bookshops, this is exactly what is happening.

“And it’s happening in our neighbourhood. We have built our independent business. We do it for the love of books and people. We love being part of our community, Stockbridge, and want to be there for many years to come.

“Only you can help us do this. If you do, Waterstones cannot hurt us. Please choose to shop indie.”

They added: “Golden Hare Books pays its staff a REAL living wage. We collaborate with other bookshops and local businesses.

“We do not crush publishers for discount and represent the value of the book. We work with authors and publishers to put on really special, bespoke events.”

Lighthouse Bookshop, an independent seller also based in Edinburgh, added: “Shame on Waterstones for their Stockbridge plans.

“Over and over they stated they would not open shops in neighborhoods where an indie bookshop already existed and assured the book trade they wouldn’t masquerade as an indie – ‘Stockbridge Books’ is just that.”

The news caused a stir on social media.

Alice Lyall said: “So, not actually a promise, just empty words from Waterstones? I guess I won’t be spending any money with them in future, in any of their guises.”

Sue Reid added: “Yes, go into an area with an excellent indie, grab its business, work done. James Daunt you should be ashamed of yourself. Find a location where there isn’t a bookshop and open up there instead.”

Fay Franklin commented: “I’m shocked. I cheered when our equivalent opened because we are 50km, an hour’s travel, from the nearest indie, and that’s the kind of gap I expected them to fill. This is shameful.”

When the lease agreement was announced yesterday, Waterstones Managing Director James Daunt, said: “Waterstones is delighted to be opening a bookshop in Stockbridge. It is an area of the city in which we have long wished to have a shop and Raeburn Place Foundation’s development offers a wonderful space in which to do so. 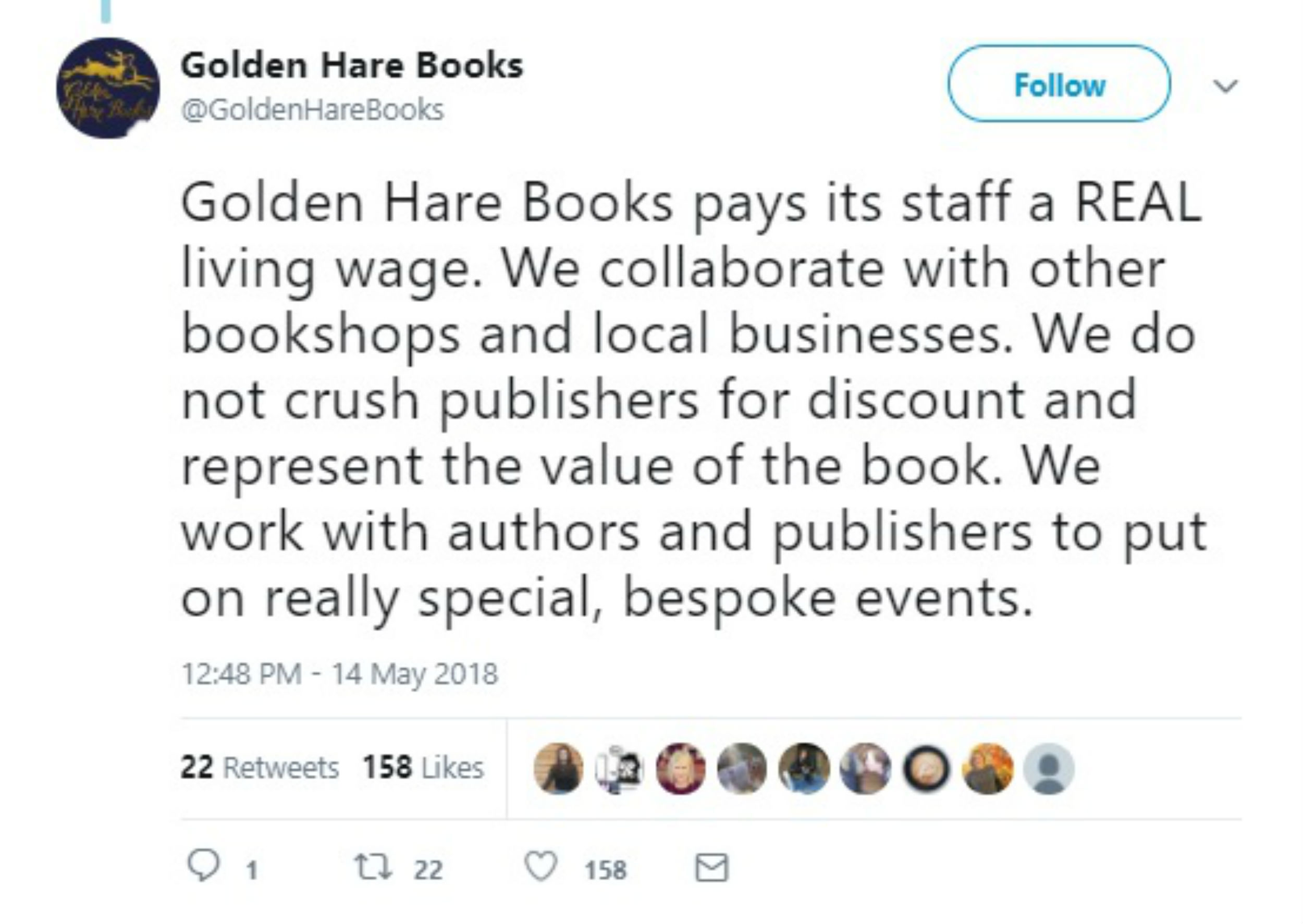 “Like every good bookshop, will draw its personality from its community and neighbouring shops. In consequence, we will be calling it Stockbridge Books and look forward greatly to its opening.”

Last year, the firm came under fire for opening three stores named after the towns in which they are located and without the distinctive Waterstone’s branding

The shops are Southwold Books in Suffolk, The Rye Bookshop in East Sussex and Harpenden Books in Hertfordshire.

Julie Danskin, manager of Golden Hare Books, said today: “It wasn’t a huge surprise that they wanted to open up another Waterstones in Edinburgh, but it’s that they want to call it Stockbridge Books.

“It’s the fact that they’re doing these looky-likey “independent” shops that only have a small card in the window that say they are backed by Waterstones.

“It’s a really sad way for Waterstones to behave, most booksellers don’t have a problem with a chain like them but now they have started encroaching and copying what we have given hours of time, money and effort into.

“Then they come in with all their resources, it’s just not a level playing field.”

James Daunt, Waterstone’s Managing Director, has now admitted that the chain had made a mistake. He said: “We occasionally use local names for our stores when it suits but in this sitaution it has turned into a bit of a muddle.

“It was a mistake, and we won’t be calling the shop Stockbridge Books now, it will be a Waterstones.

“When we were approached by the trust about opening a store, we were in competition with another bookseller, and Golden Hare Books were relatively new and not established. To be honest, we had forgotten about it until this happened.