COWDENBEATH and Cove Rangers have both been hit with a Scottish FA charges following the mass brawl which marred their League 2 play-off, while bosses Gary Bollan and John Sheran have been served individual notices of complaint.

Cowden assistant manager Ian Flaherty is also facing a ban for his part in the melee at the end of Saturday’s 3-2 victory which that salvaged the Fifers’ SPFL status.

The ugly scenes followed a hefty challenge by Cove defender Harry Milne, who barrelled through Brad Smith – scorer of what ultimately proved to be the winning goal – directly in front of the Blue Brazil dugout. 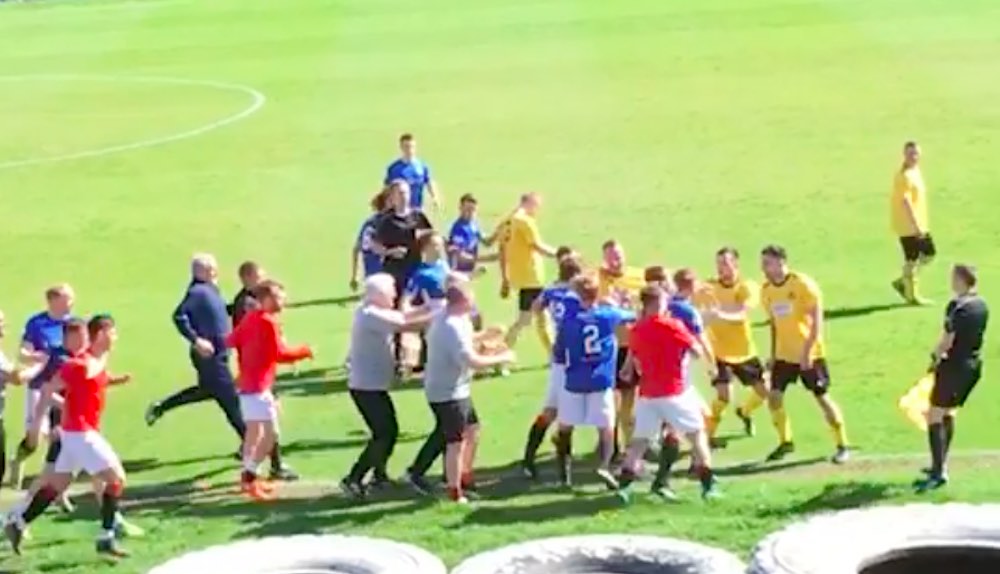 That prompted a furious reaction from the Cowdenbeath bench and a mass confrontation which involved almost every player on the pitch and both management teams.

Bollan, Flaherty and Sheran were all sent to the stands at Central Park by referee Steven Kirkland for their part in the altercation, while Cove Rangers, who saw Paul McManus sent off prior to the scrap, ended the game with EIGHT MEN as Scott Ross and Eric Watson subsequently saw red.

Both clubs are accused of a breach of disciplinary rule 204, which relates to incidents where three or more players or staff confront the opposition. That carries a potential fine of between £250 and £5000 depending its severity.

Bollan, Flaherty and Sheran, meanwhile, face potential touchline bans of between two and 10 games after being charged under the terms of disciplinary rule 203, which states ‘no member of team staff shall commit misconduct at a match’.

The parties cited have until May 22 to respond, with the hearing date set for June 22.

Sheran struggled to hide his contempt for the officiating after the match after seeing Cove’s dream of becoming the first Highland League club to win promotion to League 2 through the play-offs end but appears to avoided punishment for his comments.

Speaking to the BBC on Saturday, he fumed: “I really don’t know where we get these officials from. I don’t know if they don’t like teams from the Highlands – I think Buckie had similar problems last year. The referee was completely biased towards Cowdenbeath.

“I’m going to say my words carefully here; we feel cheated by the system and by officialdom. It is extremely frustrating.”