A WOMAN battling cervical cancer claims she was repeatedly “fobbed off” by doctors – because she was aged just 27.

Tracey Burke needs £70,000 for “last hope” treatment in Germany after the disease was discovered in her lymph nodes.

But she suggests her treatment could have started sooner if GPs had not “sent her on her way” on several occasions.

Tracy, 30, from Dundee, says it was only because she insisted on further investigation that she was diagnosed with the disease, in February 2015.

And she is now urging other women in a similar situation to keep badgering their GP until they are happy with the answers they get.

Describing her ordeal in a poignant blog, Tracey wrote: “Well my unexpected journey started in January 2015 when I was diagnosed with cervical cancer.

“I had been to the doctors several times with my symptoms but because my smears were clear and my young age I got fobbed off repeatedly and sent on my way.”

She added: “If it wasn’t for me contacting them and insisting further investigation god knows where I would have been left.

“So if anyone reading this is in a similar situation please do not stop contacting your GP until you’re happy with answers you’re getting.” 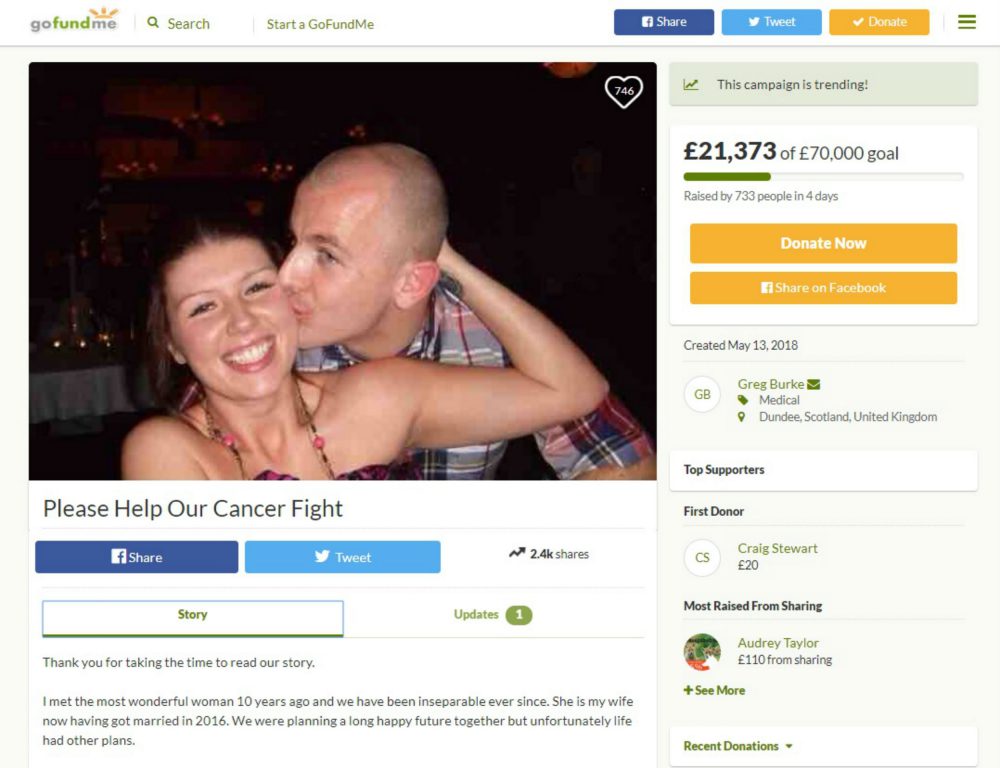 After being diagnosed, Tracey was given chemotherapy, radiotherapy and brachytherapy, a form of internal radiotherapy.

When these treatments failed to cure her, Tracey had a hysterectomy to try remove the remaining cancer.

But it was then discovered that there was cancer in her lymph nodes on both sides of her pelvic area.

Her husband, Greg, 34, is now trying to raise money for private treatment abroad, saying: “There is nothing more they can do for her. All the standard NHS treatments have not worked so the private treatment is our last hope.”

Greg wrote: “We are now fundraising to have her treated privately at clinic in Germany who use immunotherapy as a treatment.

“The estimated costs are around £90,000 but we are asking for £70,000 as we have a certain amount we can put towards this ourselves. This treatment can potentially cure Tracey.

“I understand times are hard for people but please spare anything you can to help us. I can’t imagine life without Tracey by my side.”

Tracey and Greg got married in 2016 after spending eight inseparable years together.

Following their tragic diagnosis the couple have had fertility treatment to harvest embryos in the hope that one day they can start their own family.

Last month, Tracey had been accepted for a trial for immunotherapy, but in yet another blow for the family, was dropped due to a cut in numbers.

Writing about her journey, Tracey said: “The night we got told I had cancer kind of passed in a blur.

“I was prepared for it so no tears or upset from me but seeing my partner Greg break his heart on the doctor’s floor, then having to go face my mum and best friend who didn’t even know I was having issues, that was the real tough thing.

“Everyone focuses on the person who has the disease but hardest of all, for me anyway, is watching your loved ones struggle to cope with what you’re going through.”

Last year, a newlywed from Crossgates, Fife revealed that she had just months to live after a GP missed a lump in her breast and told her “Women your age don’t get cancer”.

Deanna Wilson, 36, found a rapidly-growing lump three years ago and went to see her family doctor, was fobbed off, and three months later after persistence was diagnosed with breast cancer.