ANN BUDGE readily admits that she has endured the toughest campaign of her stewardship at Tynecastle.

Nevertheless, the Queen of Hearts is in no rush to abdicate.

When Budge rescued the capital club from the cusp of liquidation in 2014 for £2.5m, she was charged with rebuilding a club from the ashes of administration following relegation to the Championship.

However, that pales by comparison to a tumultuous season that saw her sack a manager for the first time, axing Ian Cathro last August, oversee the often troublesome redevelopment of Tynecastle and fund another hectic January transfer window.

All while Hearts limped to an underwhelming sixth-place finish in the Premiership.

Yet Budge has revealed that she would be open to remaining in place when fans’ group Foundation of Hearts [FoH] take control at Hearts, which is currently slated for 2020.

“If the Foundation and the pledgers want me to stay, I will happily stay because it is about continuity, stability and continued growth,” she confirmed.

“My only caveat is age. If I still have my health, if I still have the energy needed to do this sort of job I won’t want to go anywhere.

“At the point of which we transfer ownership to FoH, I want the main stand to be finished and I want us to be in good shape on the pitch. I want to hand over a club that is stable and has every chance of success.”

As the dust settles on an eventful campaign, she continued: “It was always going to be a turbulent season off the pitch. Then, with what happened at the start of the season [Cathro’s dismissal], everywhere we looked we had things to deal with.

“This season has been the toughest for me, both on the football side and with everything else going on.

“I still expect next season to be a challenge but I feel good about it. The aims are the same as they were this season. We want to be contesting at the top of the table and we want to be back in Europe. That hasn’t changed.” 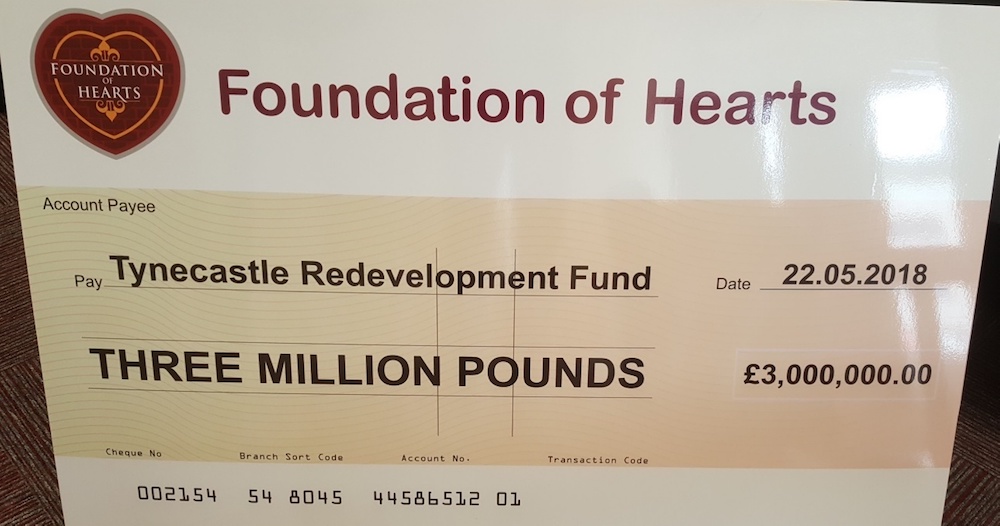 As one of the most recognisable faces in sporting landscape of the capital, Budge has no shortage of immediate feedback regarding the progress being made at Hearts – and it is a constant source of encouragement.

She continued: “I am still in the fortunate position that any feedback is positive. I don’t do social media – I have been warned off it so many times!

“So, in terms of being around Edinburgh, nobody has come up and said anything negative. It’s all been ‘thanks for what you are doing, even though it has not been the best season’.

“The majority of the supporters are very realistic about things. They know that just four years ago they were in a really bad place. We have not made third or fourth this season but we are still here and things are still going well and improving.”

Budge was speaking as Hearts confirmed the receipt of £3 million from FoH which had been redirected towards the redevelopment of Tynecastle, which will now come it at around £15 million and is set to be completed by next summer.

And while that construction is of monumental importance to the future of the club, manager Craig Levein is embarking on a similar rebuilding process to the squad, with the signings of Jake Mulraney, Steven MacLean, Uche Ikpeazu and Bobby Burns already completed.

It is a juggling act for the woman in charge of the purse strings.

“Clearly the club has a certain amount of resources and we have to decide where that goes,” Budge continued. “We have continued, despite this, to invest in the academy, and support Craig [Levein] in as many ways as we can and that will continue.

“I would love the main stand to be completed as quickly as possible because then all the business we do can go towards the playing squad. But we still have a way to go and I need to balance things.”

Budge will also be hoping to redress the balance in Edinburgh following a campaign which saw them finish 18 points adrift of Hibernian, even if she is quietly satisfied to see both clubs safely ensconced in the top six boasting managers of undoubted pedigree.

“Without question we all know Hibs have had a fantastic season, a terrific season,” Budge added. “They have played some good football and had some amazing results. It doesn’t make it worse for me.

“Our supporters would, of course, prefer if it wasn’t that way. But I am glad Edinburgh is doing well, quite frankly.

“Craig [Levein] and Neil Lennon are both fine managers and intelligent guys who know how to wind each other up – and everybody else for that matter. Craig frequently has that glint in his eye!”