A HILARIOUS picture shows a Scot lying on the ground, wrapped in plastic after being pranked by his workmates – who left him there for two hours.

Liam Wishart, from Danderhall, Midlothian, was at work on Friday (JUN 1) when he got into an argument with three joiners on site – over which was the best trade.

The electrician boldly claimed his trade was “superior” – which didn’t go down well with the rest of the tradesmen.

Unfortunately for the 19-year-old he was outnumbered at the work site near Murrayfield in Edinburgh.

As revenge for his cheeky remark, the three tradesmen wrapped him up in plastic and left him baking in the sun – for two hours.

Liam later revealed that the men also waxed his stomach and legs during the prank.

He took to Twitter to share the snap of himself in a compromising position, writing: “Fair to say after two hours in the hot sun I will never tell a joiner they’re not as important as electricians.” 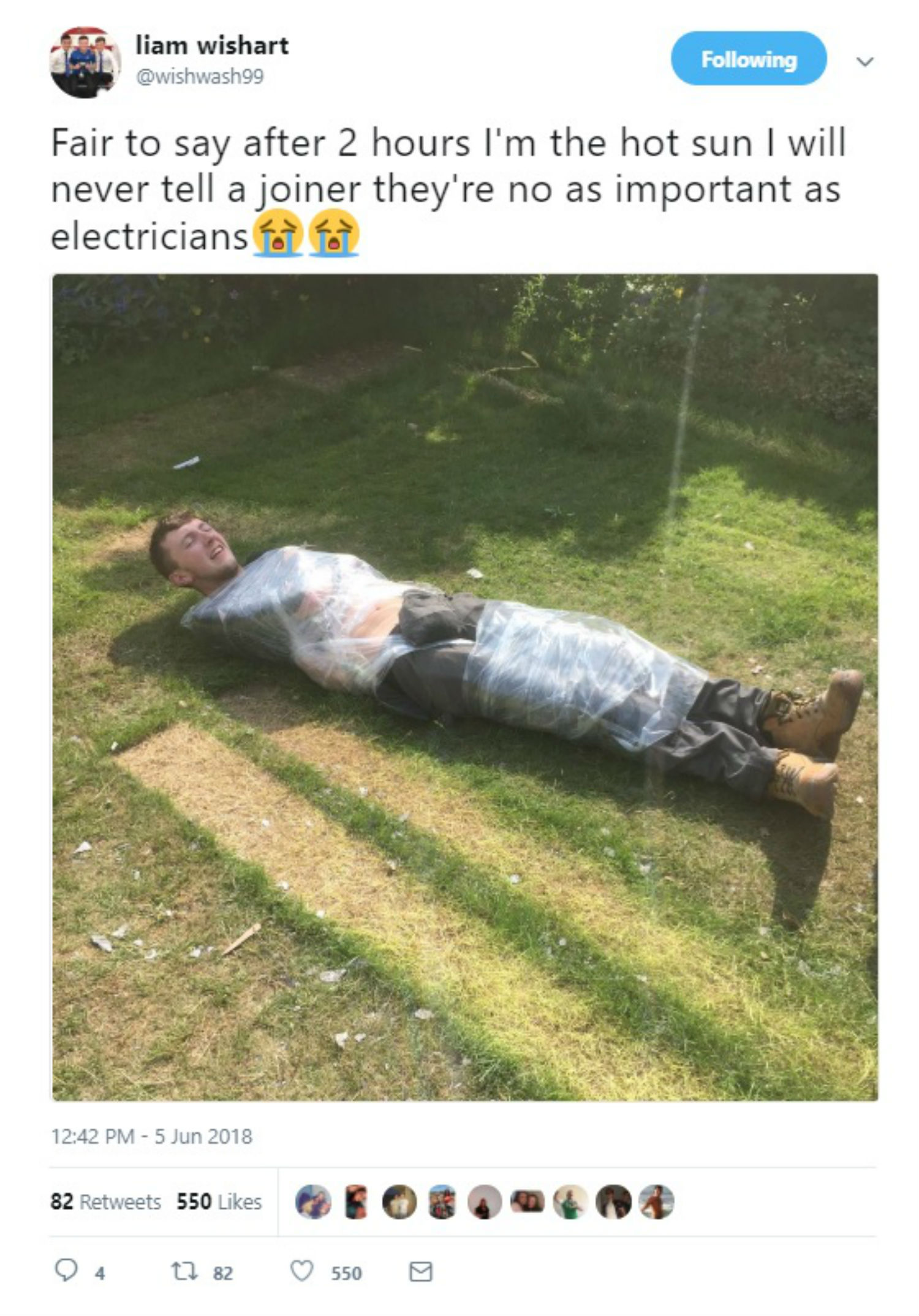 Liam’s post has already attracted over 550 likes since he uploaded it yesterday. (TUE)

The photograph shows Liam lying on the grass in a garden – with plastic wrap around his torso and legs.

The 19-year-old has his arms folded under the plastic wrap, making it difficult for him to move – and his top pulled half way up.

To which Liam boldly replied: “We’re the superior trade my bro.”

Speaking today (wed) , Liam said: “I argued with three joiners – Davy, Mark and Tan – that sparks are the superior trade.

“After a few minutes arguing Davy, a heavy joiner, put me in a headlock while the rest tied my hands in duct tape.

“I ran away to the labourer with the top half of me tied up – hoping he would help. He tripped me up and waited for them to bring very sticky polythene that covers expensive carpets.

“They said, ‘How can we be useless now if you’re the only electrician here? No one is going to cut you out?’

“They left me to get sunburn in the back garden. They also waxed my arms and stomach.”

Liam added: “I was absolutely furious and trying to wriggle free constantly. I was almost in a body bag of sweat and I could feel my face baking.”