A new business is aiming to lick the opposition in Edinburgh’s booming street food scene with a novel way to make ice cream.

Rolly’s Ice Cream – the first business of its type in Scotland – has developed a process which uses a flat pan to form unique, almost instant, ice cream ‘rolls’.

But what sets Rolly’s further apart from a regular cone, is that customers can choose to add their favourite fruit, chocolate bar or sweet and watch it be prepared right in front of them. 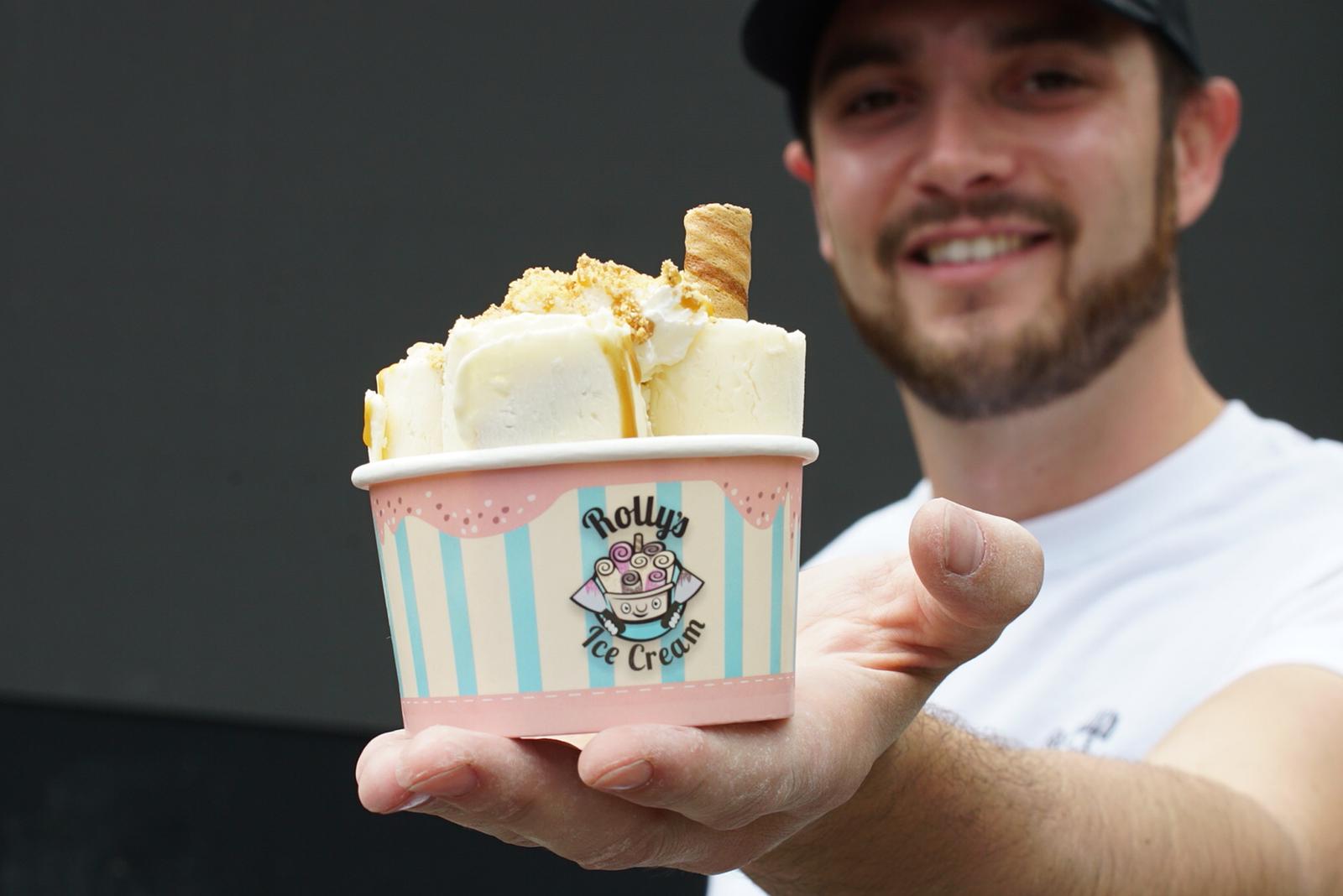 Big favourites with Rolly’s customers are the banoffee pie, which uses a rum made by a family distillery in Carnoustie, and chocolate orange which is made with a chocolate brownie soaked in The Loch Fyne orange liquer.

After a series of successful pop-ups including the HSBC Let’s Ride event at the Meadows at the weekend, Rolly’s is now set to expand and become a firm favourite in Edinburgh after landing a summer/festival-long residency position at The Pear Tree as well as appearances at food events such as Foodies Festival in Edinburgh and The Pitt in Leith.

Rolly’s has been created by mechanical engineering graduate Michael Notarangelo after he failed to find a job – with further inspiration coming from his late grandfather.

Michael, 26, from Portobello, said: “After I graduated I got a job working on the new Queensferry Crossing but when that opened I found myself out of work and unable to find another opening in the engineering sector.

“But on a trip last year to Thailand, I saw the opportunity to develop an ice cream rolls business based on the street food sellers there who first came up with the idea.

“I guess also the fact my granddad used to run an ice cream van after he emigrated from Italy to Edinburgh also had more than a passing inspiration.

“After securing funding, I set out to create my own bespoke operation, developing and sourcing the equipment – and putting my engineering skills to use – and conceiving all the branding and product development.”

The process starts with a basic ice cream custard which is poured onto the ice pan which is cooled to -20°C and then a flavouring of choice is added. Using scrapers, the mixture is chopped and combined until it starts to crystallise and form ice cream.

It is then spread evenly across the ice pan then using the scraper and rolled into ice cream rolls, hence ‘Rolly’s.

Michael added: “The great thing about Rolly’s – and not just the fact that everyone loves ice cream – is that the process creates such a happy, eye-catching experience.

“The feedback from all the events has been amazing so I’m really looking forward to being able to bring Rolly’s to a wider audience this summer.

“Plus I am also getting loads of calls from weddings and event organisers who are looking for something different to offer guests.

“I’ve now invested in three separate set-ups which means I can spread the operation in different locations.

“This Saturday I’m at Fiesta x FOLD Festival in Glasgow with other events in Edinburgh, Glasgow and Newcastle. If it continues to go well I hope to expand into other cities and areas.”