GORDON Ramsay declares he’s “moving to Oban” as he films a stunning sunset over the west coast town.

The Hell’s Kitchen star shared a series of Instagram videos on Wednesday night declaring his love for the land of his birth.

In one short clip, the 51-year-old spans his camera round the ground of his hotel as it basked in the sun.

The video, with the caption “wow” written across the centre, hears Ramsay say: “Bonnie Scotland. Welcome to the beautiful, and I mean beautiful, Oban.

“Oh my god Scotland I love you. Why didn’t you qualify for the World Cup?”

“Right, look. When I say one of the most beautiful places anywhere in the world. Take a look at this. Wee beauty.

He said: “OMFG this is a beautiful sunset at Oban. Bonnie Scotland. Come on. Seriously. Beautiful. I’m moving here.

In a series of clips, the Scot can also be heard saying: “Oh lord. Come on. Really?

Ramsay, who now lives in London with his wife Tana and four children, was visiting Oban with Gino D’Acampo and First Dates star Fred Sirieix.

Yesterday Stefanie Roth? shared a snap of Ramsay on a boat in Oban.

She wrote: “Was great to see you today @GordonRamsay- hope you enjoyed your visit to the Isle of Seil and the Oban distillery. And thanks for waving back at us.”

Ally Mackay said: “Seeing @GordonRamsay is Oban is making me think he should come experience a Thursday night karaoke in the volley tomorrow night.”

And Rachel Macgregor said: “Ffs feel like I’m the only person in Oban that’s not met Gordon Ramsay.” 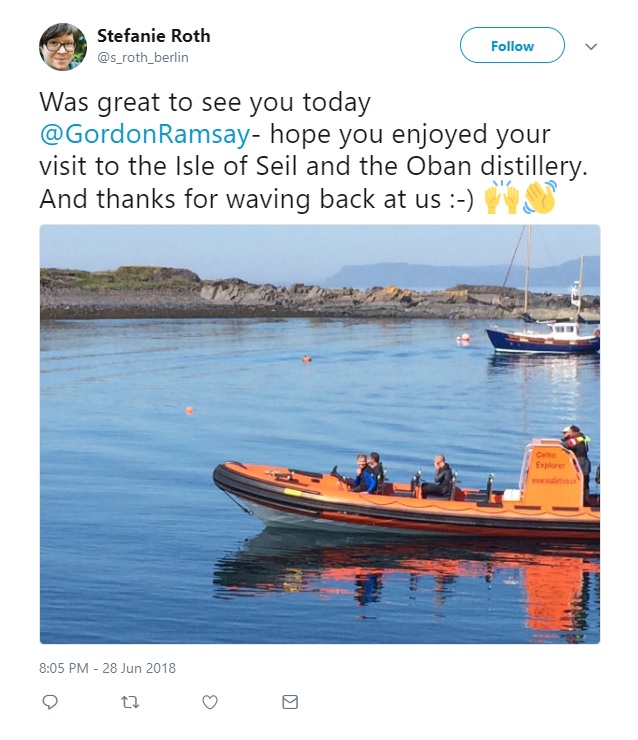 Hundreds of fans showed up to catch a glimpse of the star after hearing about his visit and apparently Ramsay was happy to pose for selfies with around 200 fans.