A PUPPY died within 30 minutes of eating killer algae on the dried-up banks of a Highland river.

Leading Scottish businessman David O’Connor has warned other dog owners to take care after his beloved pet, Bell, was poisoned.

The blue-green algae that killed the nine-month-old springer spaniel is usually a threat in lochs and reservoirs.

But the hot spell has caused river levels to fall and the flow of water to become sluggish, allowing the algae to build up and coat the banks.

Bell was playing on the exposed banks of the River Conon near Dingwall when she was poisoned by licking algae.

David, the chairman of Glen Wyvis Distillery, Dingwall, said he took Bell home but she became “dramatically sick” and had to be taken to the vets, where she died. 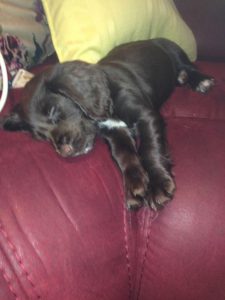 David, 58, who was formerly a Chief Superintendent with Police Scotland, posted a picture of Bell on Facebook with the caption: “Warning to all dog owners. We lost our pup today after she ate some blue/green algae at the river Conon.

“The falling river and hot weather has created a danger which sadly we were not aware of.

“All dog owners please be aware as this is such a tragedy for Bell and our family.”

David said today (Fri): “We walked the dogs regularly along the river with no problem at all. Yesterday my son took them along the River Conon and came home.

“We could see right away that she was seriously ill. We took her round to the vets within five minutes and then she died. The whole episode from start to finish took about 30 minutes.”

He added: “Because we have been getting no rain the river has been at a really low level and the algae has been left exposed which is very dangerous if it comes into contact with animals.”

Iain Muir, a vet working at Dingwall Veterinary Practice, wrote on Facebook: “We had a young spaniel in the surgery today which less than half an hour earlier had been romping around on a walk with his owners.

“Now, despite the frantic attempts of vets and nurses to save [her she] lay dead on the clinic table. That’s how dangerous blue-green algae is.”

He added: “What was unusual in this case is that the dog was poisoned by algae from a river – it’s a problem usually associated with lochs where the water isn’t flowing and there’s a chance for it to build up.

“However, with rivers drying in the drought, flows are sluggish and the river-banks are getting coated in algae as the river level drops.

“There’s different sorts of blue-green algae – some aren’t that toxic and your dog may have encountered them without any problems. Others, like this one can kill in minutes, so don’t let past experience make you complacent.”