A SCOTTISH teenager who taunted Three Lions supporters was tweeted a picture of her dead dog with the words “guess what isn’t coming home?”

The 19-year-old from Glasgow has also been called a “fat c***” and “Jabba the Hut” after she tweeted her hope that England fans would suffer “shattered dreams”.

The Twitter user, whose first name is Alana and who uses the handle @0192am, posted: “Let England get tae the final.

“Let them think ‘football’s coming home’ for them to be absolutely pumped and embarrassed beyond belief.

Alana’s tweet gathered over 22,000 likes, 4,800 retweets and reeled in hundreds of England fans who couldn’t resist biting back.

A post on the Twitter account of Ellisfarrar9 used a picture Alana emotionally shared last month of her dog, Troy, after the pet died. The picture was captioned: “Football is coming home, guess what isn’t?”

The account, which is also named after England midfielder Jesse Lingard, also called Alana a “fat slag” during the spat.

Others apparently joined in to fat-shame Alana, including Matt Boyer who commented: “Quieten down Jabba.”

@_pool_ey added: “I wanna see you go a week without eating KFC but we can’t all get what we want.”

SimplyREIDing commented with a side by side picture of Alana and Roz, a yellow slug-like monster from Monsters Inc, with the caption: “Enough said.”

Meanwhile, Fin fumed: “Your bitter self only has that hope to cheer you up while we’ve had a cracking month watching our national team do us proud. You wasn’t alive last time your country was at a world cup. Stay bitter love.”

While Neel dug the boot in, writing: “When will your country ever make a World Cup semi final or final? Never.”

Alana eventually responded to the barrage of abusive messages, writing: “The aggression and personal attacks I am getting from mainly English men is baffling.

“It’s a wee joke about a game a fitbaw, the personal attacks aren’t needed. Cheer up and have a laugh ya bunch of miserable b*******.X” 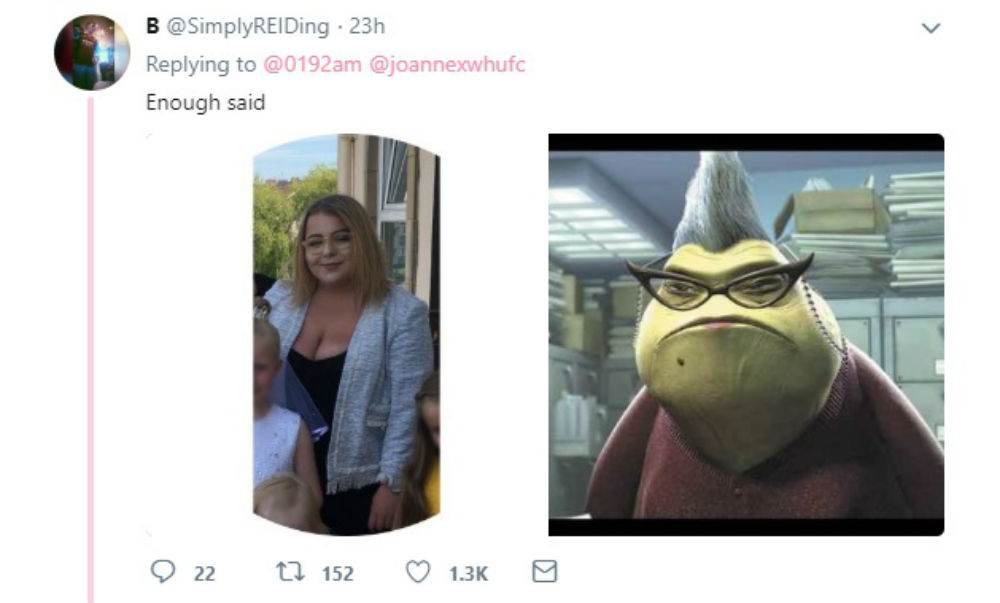 But as the trolling mounted, she later added: “I suppose it’s easier to insult someone’s appearance when you don’t have your own on display.

“Sexist s***ebags the lot of them. If a man tweeted wit a did it’d either be taken as a joke (which wis my intention) or a genuine debate about football. The internet never ceases to amaze.”

Lewis Archie Roberston added: “This is the type of hatred I can abide by.”

Phil Orme commented: “Fair play Hen. A wee bit of Banter did nae one any harm.”

Speaking today, Alana, who does not want to reveal her surname, said: “It’s been pretty tough looking at all those tweets insulting my personal appearance considering I never expected the tweet to get more than five people’s attention.

“The dog stuff caught me off guard. It was a pretty low blow and actually very sad of them to do so, as they would have had to scroll through my Twitter feed to find that my dog had recently been put down.

“They were clearly looking for ammunition, but they need to get a life if that’s what they’re using against me.”

Alana also shared various screenshots of personal messages from England fans calling her “fat” and a “fat c***” but added that she had also had messages of support in private via direct messages.

She added: “I’ve had hundreds of messages from people of various nationalities but, however I’ve found that it’s mainly English people that are DMing me support and compliments.

“There have been a lot of lovely messages that I never would have expected, but they help filter out the negative ones so i’m extremely grateful for them.”