One of those strikes came in last December’s memorable 4-0 thrashing in a game that ended the Glasgow club’s record-breaking 69-game unbeaten run. 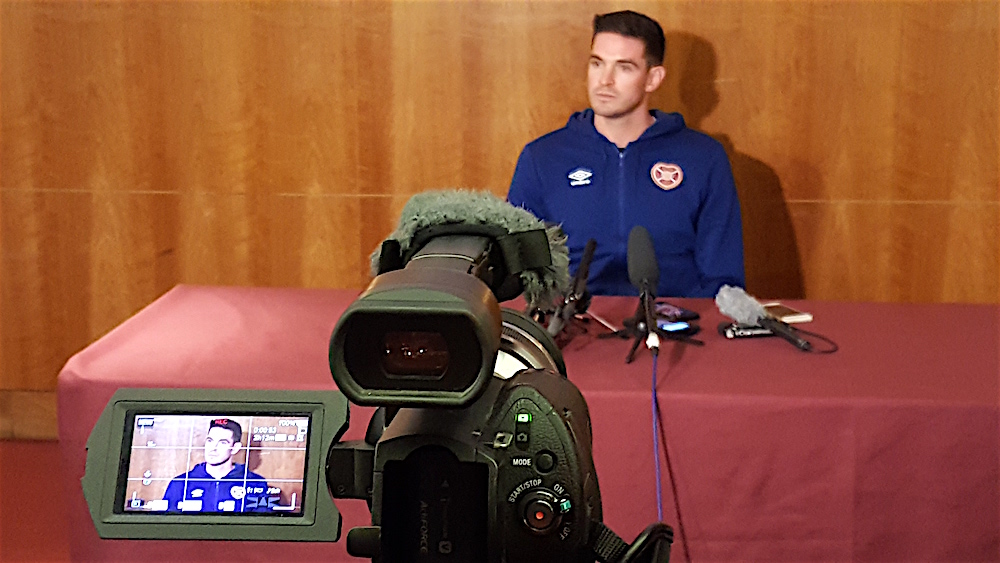 The marksman finished last season as the Tynecastle side’s top scorer with 19 and that form led to Rangers recently launching a failed £200,000 bid to re-sign the 30-year-old.

However, ‘having his head turned’ by his former club and the form of summer recruit Uche Ikpeazu has seen Lafferty start from the bench in Hearts’ last two games.

He said: “It does factor into my thinking, that’s something that comes in for every game.

“So Kyle is obviously under consideration.

“He has trained well this week so I have no complaints on that front. He is full of enthusiasm.

“He scored three goals against Celtic last season and I would be surprised if anyone else did that.

“So that obviously comes into my thinking.”

Levein has a selection headache in attack, with former Cambridge United marksman Ikpeazu already having become a fans’ favourite with three goals from his last three games, while Steven MacLean and Steven Naismith also started the 4-1 victory at Hamilton on the opening weekend of the league season.

Levein added: “We have got more options, more balance and more strength in depth than we had last season. So that helps.

“The whole thing makes me feel a bit better.

“We have more options and different ways of scoring goals and more players who I feel can score.

“It just makes me feel I can do something different during a game to change the course of events.”

Levein, meanwhile, insists one of his biggest challenges is to make sure his players do not overstep the mark when they cross over the white line, with many of his 13 summer arrivals set to make their debuts in this fixture.

There has been little love lost between the two teams in the past and Levein admits he fears the players’ determination to perform in front of a big television audience could cloud their judgement on the pitch.

He added: “There is an intensity about this fixture.

“There is a definite build-up of tension coming into a game like this. Players can’t get away from that.

“My real challenge at times is keeping them just underneath the line that dictates whether it gets overly aggressive or not.

“I don’t have any issues about them understanding the nature of this match or feeling that we’re going into a game where we need to be at our absolute best to compete and make it a level playing field. Keeping them calm will be the challenge more than anything.

“A lot of these players are here for this type of fixture. They’re here because they want to be involved in front of a full house, in a game live on TV which can enhance them as players and their profiles.

“This league is widely covered by TV. Where some of our players have been, they haven’t been exposed to the TV coverage and media interest they’re going to get here.

“This game for them is the first one this season that they’re going to be excited about.”

Levein took in Celtic’s 1-1 Champions League clash with Greek side AEK Athens at Parkhead on Wednesday and admits the Hoops’ progression to lucrative group stages being in the balance could help his side’s cause.

He added: “Sometimes these things go one way or the other.

“We are stuck in between the two most important games of their season right now, certainly financially.

“I wouldn’t be surprised at all if Brendan brought in a couple of bodies between now and the weekend.

“With that result I think there will be an urgency to speed up any process of strengthening their squad.”