A FURIOUS gamekeeper has verbally fired both barrels at members of the public littering his estate with helium balloons and Chinese lanterns.

Richard Wolfenden raged that he doesn’t give a “rat’s c**k” whose wedding, birthday, anniversary or love for someone is being celebrated.

The gamekeeper from Lowgill, Lancashire, posted pictures of some of the deflated, celebration balloons he has discovered on the estate he patrols.

Richard, who works as a grouse keeper at The Fourstones Estate, North Yorkshire, as well as in Cumbria, vented his anger on Twitter.

The post prompted many other social media users to share their own pictures of discarded balloons spoiling otherwise pristine environments.

Many UK councils have banned the release of helium balloons, as they can travel up to 10 miles and often land in the sea – where they become a risk to marine life.

Taking to Twitter, Richard wrote: “Rant of the day.

“I don’t give a rat’s c**k who you feckin’ love, or if it’s somebody’s feckin’ birthday, engagement, wedding or feckin’ anniversary.

He added: “I’ll tell you what they should do, not buy the feckin’ things in the first feckin’ place. If they do feel that they’re essential then they should keep them tethered or indoors, and not let them float off into the sky. Simple.”

Richard added photographs of two discarded balloons which had landed on the moorland he looks after.

The first photographs shows a red balloon with the words “love you” entangled with the string on a blue star shaped balloon.

The red balloon is visibly deflated, although the blue balloon is still intact, and the moorland can be seen spreading out behind them. 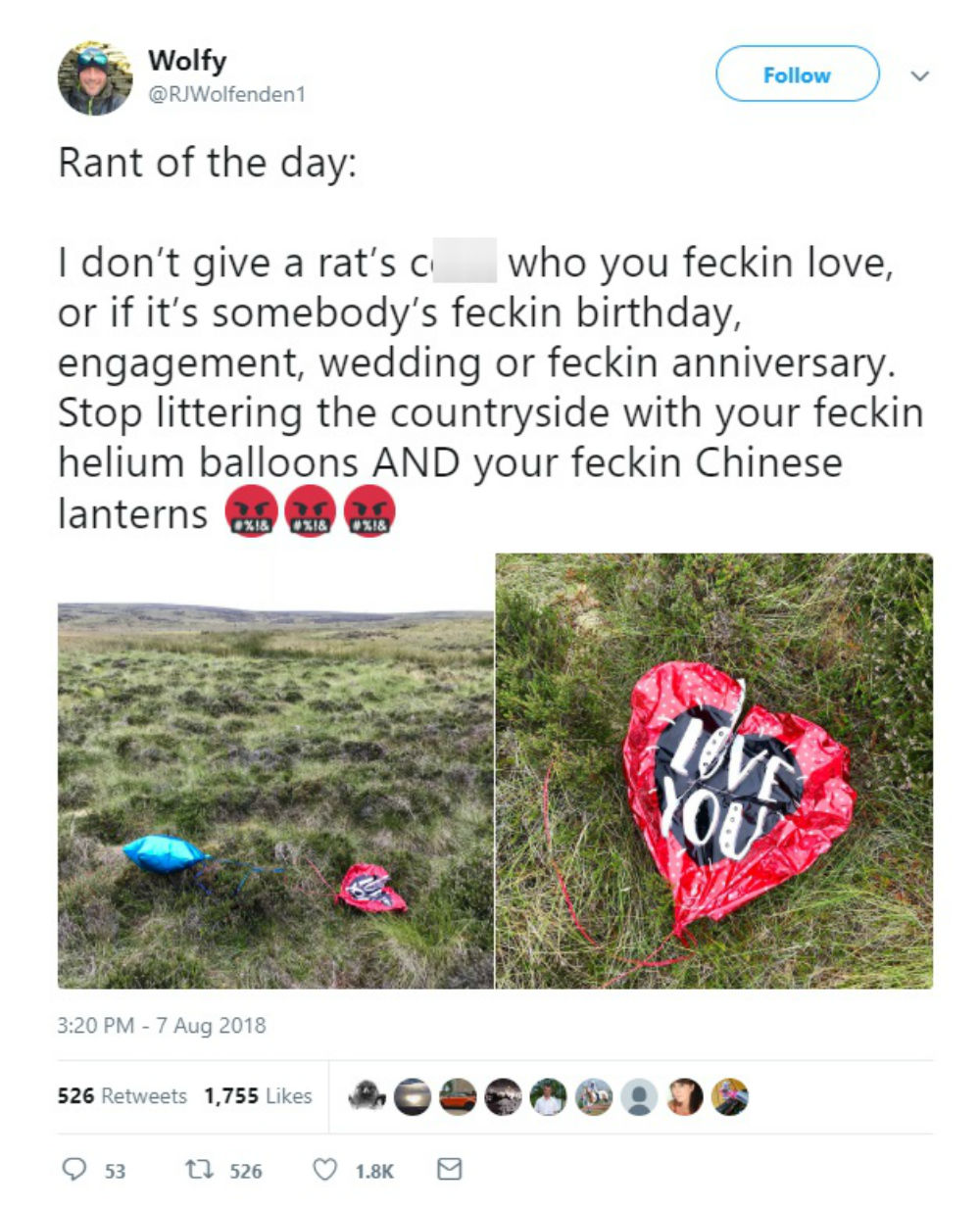 A second photograph shows the red balloon, which has been split in two at the top, lying deflated in the grass.

Social media users were quick to agree with Richard and shared photographs of their own helium balloon discoveries.

BCBruvs shared a photograph of a bunched up blue birthday balloon with the caption: “Found this at the beach, was half inflated but popped it. Watch a dozen people either point at it, or go over and kick it…..not one person picked it up.”

ColdwellRocks also added a photograph of a large deflated pink Barbie balloon in the middle of a picturesque forest. They added: “Even Barbie gets a look in at littering in the Forest of Dean. Fecking things – ban them completely.”

Rosemary Thompson shared a shocking photograph of a large balloon which appears to have been ripped apart – but with a helium balloon still attached.

She wrote: “Not just today but every day I find one when out and about. I just hope there is some countryside left for that little boy to enjoy.”

While others called for a ban on the sale of helium balloons due to their effect on the environment. 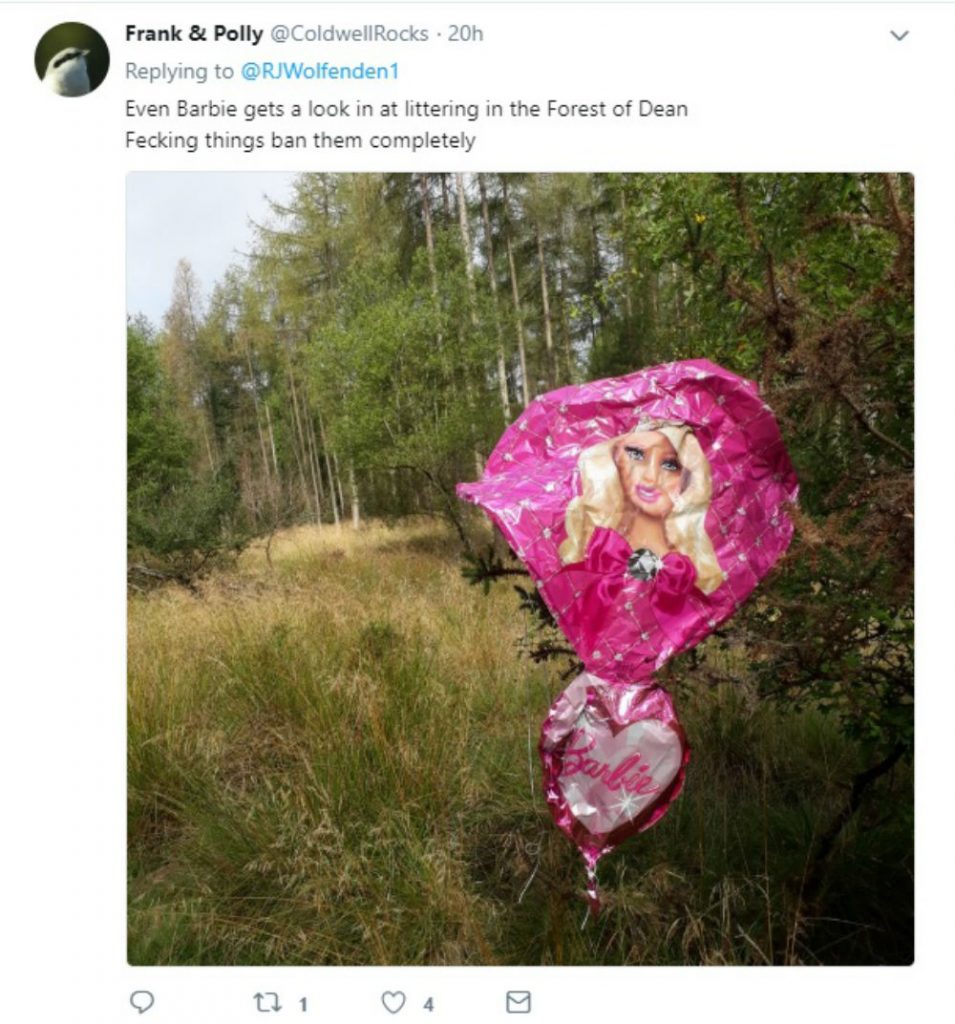 Renee Lascala said: “Why are these wretched items even sold? Buyers AND retailers need to face pressure. There have to be alternate choices.”

Daveyvermaak added: “Ban them. Simple as. I’d prefer to wake up at midnight too a flurry of fireworks, but perhaps this is a cheap way out. Ban them.”

Susan Beever wrote: “Pointless, should be banned. Where on earth do people think they are going to land? But I suppose the idiots who let them go don’t really care.”

Oxford, Brighton, Plymouth and Shetland are amongst the local councils who have already banned helium balloon releases.

Balloons are though to soar up to five miles into the sky before shattering into pieces – but around 10% of them remain largely intact if they don’t reach that height.

The balloons can then travel for tens of miles and often end up in the sea – turtles, seabirds and dolphins have all been recorded as being killed by balloons or the plastic string attached.