The last Saturday in August is reserved for one of the largest busking events in Europe. Edinburgh’s Big Beach Busk brings together around 400 talented artists, and see’s the population of Portobello more than double in size with visitors from near and far. This, it’s ninth year was no exception.

It all started 10 years ago when Paul Lambie and some of his mates wondered why Portobello’s prom wasn’t full of buskers. The conversation soon turned towards the challenge of populating Edinburgh’s seaside promenade with as many musicians as they could invite between them.

“The first year was a surprise to us, with about 80 buskers turning up and ‘some’ people.” recalled Paul “I wouldn’t say it was an actual initial successful, but it was a lot of fun.

“It wasn’t until about the 3rd year that it really took off. People started setting up with tents on the beach and buskers would start getting here early to reserve their preferred pitch.”

A number of artists play at the Edinburgh Fringe, another one of Edinburgh’s well known festivals, then come to Portobello especially for the Busk. Musicians as far away as Orlando and New Zealand play year after year. Some have formed strong friendships and have even toured together as a result.

It’s now not just about the music, the Big Beach Busk has grown into it’s very own festival with many other attractions and activities. There’s everything from the organised events such as the annual Sandcastle Competition for both adults and children and the SVA (Scottish Volleyball Association) beach volleyball championships to many local young entrepreneurs providing services such as homemade lemonade to quirky Matt Groening cartoon like portraits.

I asked Paul what he does each year to make this happen. “Literally, all I do is fill out a form for the council, draw a poster, stick it up in the shops and have a few hundred conversations on Facebook.” He modestly explains.

“Then on the day, we draw some arbitrary circles on the prom and say thank you to as many people as I can get round – I think the busk is entirely powered by conversations, conversations and good will.” states Paul.

Local businesses have also benefited from Paul’s ability to create a mass gathering from simple musings, with many reporting record takings on the day of the Busk.

Porty Carpet Cleaning, a local business, had the ingenious idea of organising a litter picking group. Armed with bags, long reach grabbers and branded t-shirts, they scoured the prom acquiring detritus as they went.

The Edinburgh Big Beach Busk is a day of music, fun, love and kindness. It has inspired many a talent, young and old. Paul is overly humble about his achievement with many hundreds, if not thousands, of people benefiting from his simple quest 10 years ago. 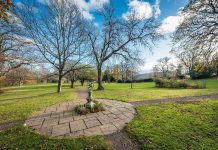