A HILARIOUS video of a police officer joking around in a station has sent the internet into meltdown – for his incredible resemblance to Hollywood actor Tom Hardy.

The hunky cop, who works for the British Transport Police but has not been named, was filmed joking around and doing an impression in a station locker room.

But viewers were more impressed with how much the officer looked like the 40-year-old Mad Max star.

The officer, who showed off his arm tattoos and matching Hardy haircut, attracted scores of comments from users who asked: “When did Tom Hardy join BTP?”

Others joked that they wanted to be arrested by the cop and dubbed him “yummy”.

UK Cop Humour uploaded the clip to Facebook yesterday (TUE) with the caption: “What are they putting in the stations water?”

The clip has already had 30,000 views and scores of social media users noted the cop’s similarity to the Venom actor.

Carol Montgomery wrote: “They say everyone has a twin. This officer is definitely Tom Hardy’s twin.”

While others were simply taken aback by the cop’s good looks.

Aurora Enzo asked: “Which constabulary is this? And do they need a new custody nurse?”

Dean Appleson added: “Oh damn. I must be arrested and searched by this man.”

Jordan Maxwell wrote: “He can taser me any day.”

Natalie Cronin said: “Coooorrr. If his water is spiked he’s more than welcome to come and use mine.”

Tanya Rose joked: “I’m gonna dial 999 and tell him to come out to attend a scene because I’ve just died and gone to heaven.”

Mel Calladine commented: “He can nick me any day.”

The footage begins with the officer in full BTP uniform standing in a police station locker room holding a cup.

The officer in a put-on accent waves his hand in front of him and says: “Let me mend those sorrows with a little tune.”

He then begins to whistle while shaking the glass in his left hand and sending the water in it flying all over the floor. 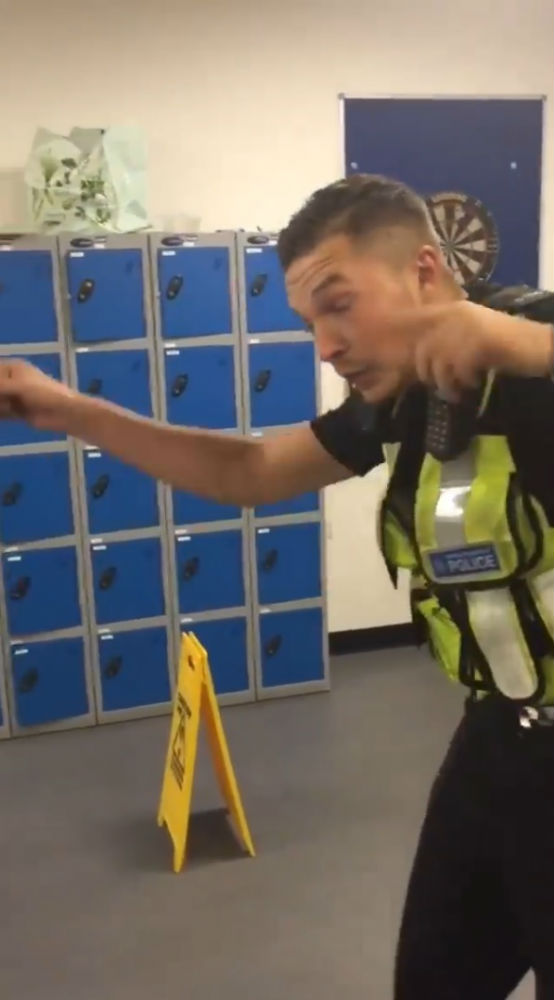 The officer can’t contain himself and bursts into laughter as the clip ends.

Last year, Marvel fans were confused when they thought Hardy had made a cameo appearance in Spider-Man: Homecoming.

However, it was the hunk’s doppleganger Logan Marshall-Green who had taken on the role of The Shocker during a tense scene.

The 40-year-old bares a striking similarity to his much more famous fellow actor.

A spokesman for British Transport Police today (wed) confirmed the “Tom Hardy lookalike” is one of their officers but declined to comment further.