A SCOTS bride has sent prosecco fanatics into a frenzy after offering to rent out her custom-made wedding dress – which holds 50 glasses of the popular fizz.

Kelly McMillan from Pilton, Edinburgh arranged to have a circular solid steel frame made ahead of her wedding reception earlier this month.

The unique apparatus is made up of four rows of metal holders which hold dozens of wine glasses, whether it’s for prosecco, red, white or rose.

Prosecco-loving Kelly wore the incredible frame over her wedding dress on her special day, leaving her wedding guests in awe.

The 38-year-old has now decided to rent out the “prosecco dress” to future brides in a bid to give them the same one-off experience.

Scores of potential renters have went wild for the dress – with many bride-to-be’s branding it “the dream dress”.

Jade Flannigan added: “I should walk in to my first dance in this.”

Hair salon owner Kelly had the bespoke dress made by a blacksmith for her wedding reception three weeks ago.

She was shown a similar dress by a customer during an appointment and thought it was a “perfect” way to kick off her wedding party.

She then approached pal David Wright, of Powderhall Bronze, Edinburgh, and asked if he could create something similar for her special day.

David initially told Kelly it would be a tricky task and that he didn’t think he could pull it off.

But he turned up with the huge steel frame, which weighs around 30 kilograms, as her wedding present at her reception in The Village Hotel at Crewe Toll, Edinburgh.

Kelly shared photographs of the dress on Facebook as she hopes to hire it out for £100 – so other brides can enjoy the unique experience.

Taking to Facebook selling pages, Kelly wrote: “Prosecco dress for hire. Holds about 50 glasses. Solid steel. Can be dropped off and picked up.” 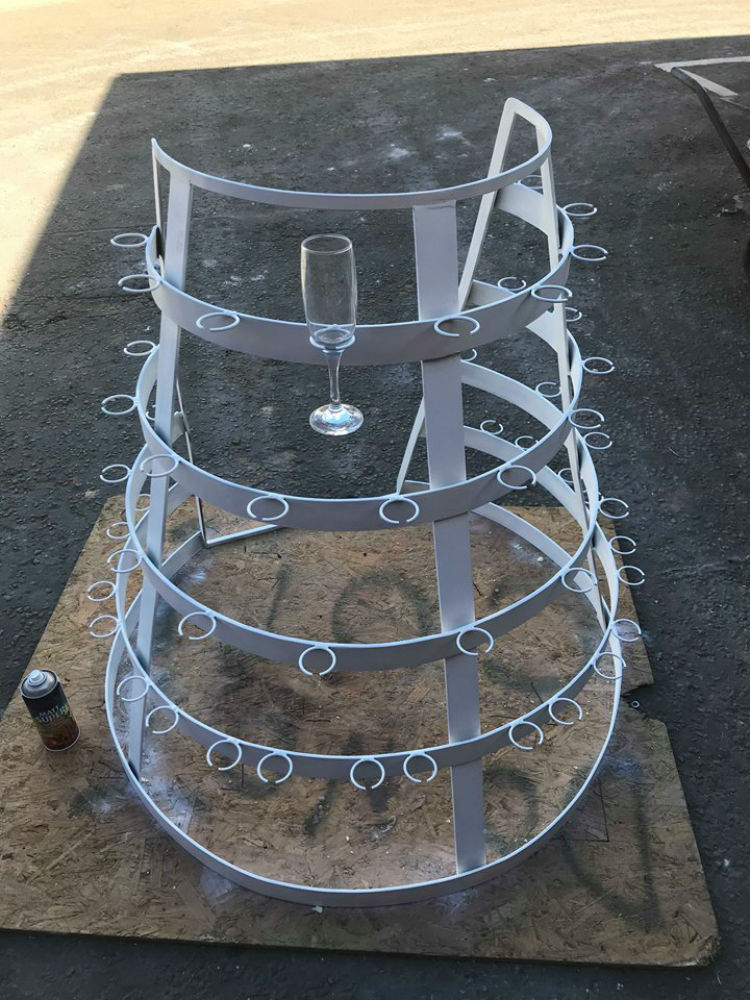 Photographs show Kelly standing in the four-tiered steel frame, which has been spray-painted white, with 50 small circular rings filled with prosecco glasses.

The grinning bride, holding a glass of prosecco herself, is visbly glowing as she greets her guests.

The frame is designed to mimic the shape of a ballgown wedding dress – giving the bride plenty of space to move around in while chatting to guests.

The “dress” has a wide opening at the back, which allows the bride to step into it, but due to its weight it cannot move.

Other photographs show the delicate process that it took to weld and build the frame.

Blacksmith David can be seen measuring the height of the dress, and welding on individual rings to hold the glasses in.

Speaking today, Kelly said: “I own a hair salon in Newhaven, and one of my customers saw a similar dress online and said ‘that is absolutely perfect for you’ and I agreed.

“I went to David, who is a blacksmith, and asked him if he could make one – and he said ‘I don’t know’.

“Then, he brought it along on the day as a wedding present.

“It was fantastic, it’s much more personal than just sticking a table full of prosecco and letting guests grab one.

“You just stand in it while they grab a glass and you can speak to them.”

Asked what her guests thought of the dress, Kelly replied: “They were loving it, everyone loved it because it was different.

“We had little messages and plaques hanging from it and it made it really special.”

And now, Kelly is hiring out the dress. Explaining why, she said: “I asked the hotel if they wanted to keep it, but they didn’t have the space. And I didn’t want to leave it behind or just having it sitting in the house.

“I hope other brides will be able to enjoy it themselves too, I don’t want it to go to waste.”

Blacksmith David, 48, said today that making the dress in time was a tricky task. He said: “To be honest, I had forgotten about it until the wedding rehearsal, she had asked me on the stag do and we were all inebriated – I would have said yes to anything.

“Myself and my wife Lisa worked on the dress from the Monday night, when the wedding was on the Friday. I spent a lot of extra hours in the foundry after I finished the day job putting it all together. I think the first part took me around 10 hours to do.

“We worked from a picture on Lisa’s iphone, we didn’t have time to design it, and we even used curtain hooks from B&M as the glass holders.

“We spray painted it at 8am on the day of her wedding so we were worried she would get paint all over her dress, but it worked out. And, when I dropped it off at the hotel I couldn’t get it through the doors because it was so big.

“It took a lot of graft and we were burst by the end of it, but I’m really proud of how it turned out.”