A SHOCKING photograph showed the aftermath of a fleeing burglar who rammed into a police car – putting an officer in hospital.

The police car is visibly bashed and battered, while a van door lays discarded on the road beside it.

Chief Inspector Jack Hadley, of West Midlands Police, shared the picture on Twitter and told the burglar they would “hunt him down”.

The disturbing incident occurred in the early hours of this morning (THU) when the fleeing burglar “deliberately” reversed into the police vehicle.

The man allegedly robbed a Cost Cutter in Cross Road, Stechford, but was later arrested after he “jumped” from the van and ran off on foot.

The injured officer has now been released from hospital and is recovering at home with minor injuries.

Police have said the cop car may now have to be written off.

Chief Inspector Jack Hadley shared the photograph Twitter with the caption: “Another one of my Response WMP [West Midlands Police] officers has been hospitalised when his patrol car was deliberately rammed by occupants of a van suspected of a burglary.

“Driver – we are going to hunt you down!” 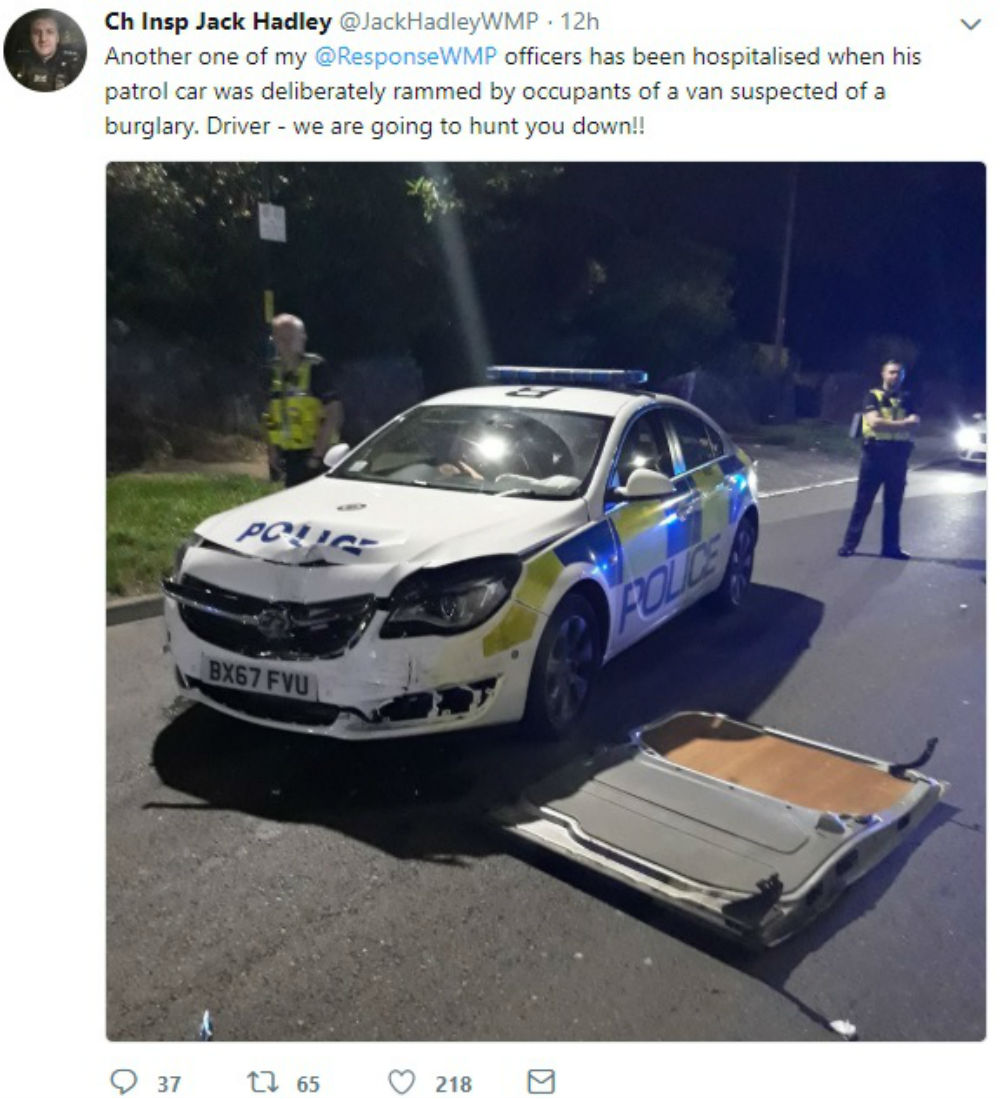 The photograph, taken in the dark early hours of this morning, shows two uniformed policeman standing beside the heavily damaged car.

The vehicle’s bonnet is visibly dented, and the car’s lights are also smashed.

What appears to be the back door of a van can be seen lying on the ground beside the cop car.

On social media, Mitchfaefife said: “What is wrong with people. No respect these days for our police. Hope your officer is ok.”

Stephen04103616 added: “Speedy recovery for your officer and speedier capture of the cockroaches that did it.”

Sc_tamworth comment: “Hope your officer is ok now. Those who did this need to be brought to justice.”

A spokesman for West Midlands Police said: “One of our officers was injured this morning (THU) after his police car was rammed by a van as he pursued a suspected shop robber in Stechford.

“The van driver is understood to have deliberately reversed into the patrol car, shunting it several times, in Giles Close just after midnight before driving off.

“The car was badly damaged ? and may well be written off ? but police back-up arrived moments later and followed the van into Kelnmead Road where the suspect jumped out of the passenger side door and ran off.”

Police added that the man didn’t get far as he was followed on foot by officers.

The spokesman added: “He was quickly chased down by the cops and arrested on suspicion of attempted burglary at the Cost Cutter shop in Cross Road.

“A quantity of cigarettes was recovered from the van. A 22-year-old man from Yardley remains in custody this morning.

“The officer who was hurt suffered minor injuries. He has since been discharged from hospital to recover at home.”

In August this year, a Greater Manchester police officer was rammed by his own van during a chase which went horribly wrong.

CCTV footage showed the man slow down to let the officer out to pursue the suspect – but his colleague then appears to drive the van straight into him accidentally.

The officer was taken to hospital for treatment after he sustained a leg injury.