A CUSTOMER assistant has revealed how an admirer tracked her down on social media using her work name badge and sent “creepy” voice messages.

The man jokes that he is being a “bit creepy” and refers to Ciara Welsh as a “piece of meat”.

Ciara, from Glasgow, used a screen recording app to film the voice messages she received from a customer who came into the convenience store where she works.

The man, whom the 19-year-old does not want to identify, tracked her down on Facebook before sending her a series of strange voice messages.

The man claims it “felt like fate” and if he hadn’t sent the messages he might have “regretted it his whole life”.

However, thousands of scores of social media users condemned the man for being “creepy”, “bold” and “weird”.

Ciara posted the clip to Twitter with the caption: “Never wearing my name tag to work ever again.”

The footage has been viewed over 427,000 times and received 11,000 likes since it was uploaded last week.

The man, who Ciara has not identified, can be seen starting the conversation by writing: “??? A sorry I know you. Aww.”

Ciara defiantly replies “You literally added me” to which he responds “I know lol”.

The first 20-second voice message from the man then begins and he can be heard, in a strong Glaswegian accent, saying: “I know I was in the shop last week the one you work in.

“Eh, I bought three bottles of water and I seen your name tag and your wee nose ring.

“I was like that, oaft, she’s some bit a meat. So, I went outside, put in your name and you were about four or five down. 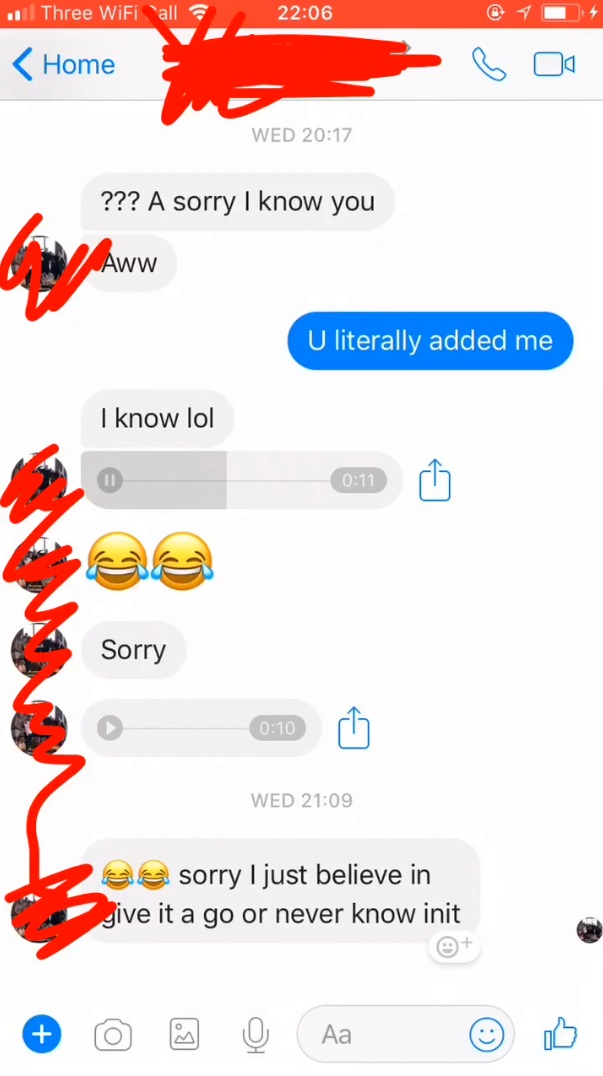 “Bit creepy, but it’s true. I just didn’t know who you are know what I mean? I forgot.”

The man then sent two laughing emoji’s and “sorry” before sending a shorter nine-second voice clip.

He can be heard saying: “I’m sorry to be creepy but f* it just felt like fate know what I mean?

“If I don’t add you I might regret it my whole life and stuff, so I had to go for it. Sorry.”

When Ciara didn’t reply for 50 minutes, the man sent a final message which reads: “Sorry. I just believe in give it a go or never know init.” 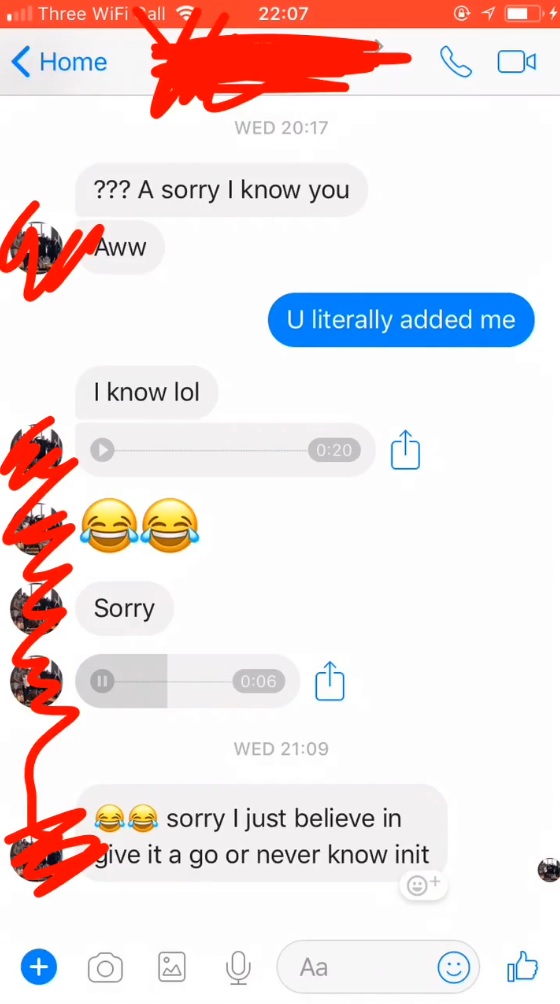 On social media, Erin McElroy wrote: “I am f** howling. Why did he have to send a voice note?”

EmsTheGoddess added: “Omg no way Ciara. I won’t be able to step in the shop without thinking about that now.”

Rebekkaarnold commented: “This happens to my sister all the time at work because her name is unique they find her straight away, weird as f*.”

JimmyKrankie79 added: “What a creepy ned.” 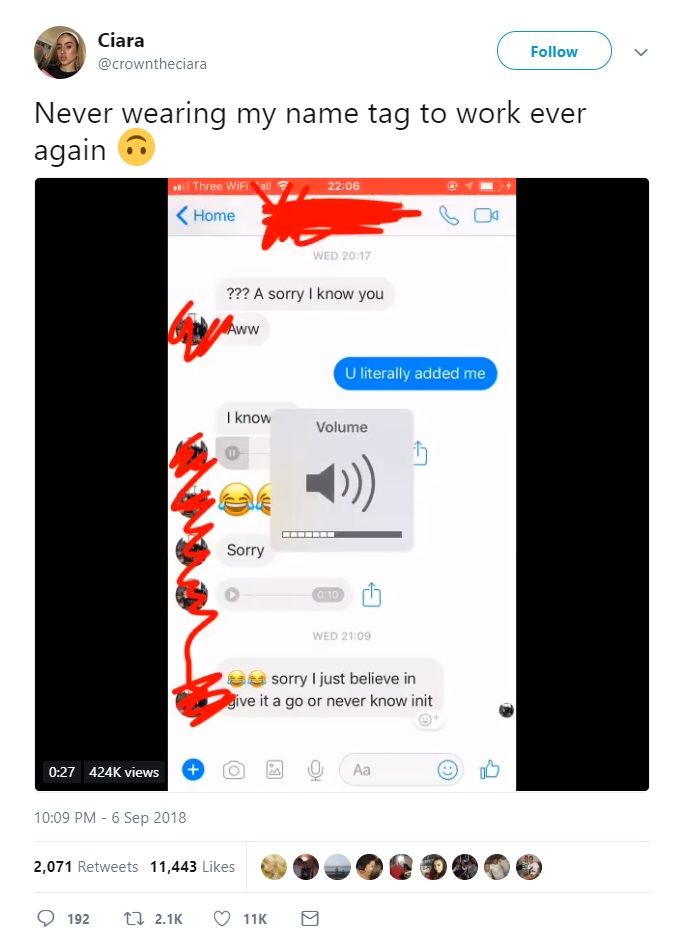 Woodsy86_lfc commented: “This is the weirdest s* that’s ever come across my time line ever.”

While Aldo said simply: “Some guy.”

Speaking today, Ciara said: “I don’t remember serving him at any point but from his photos I do recognise his face slightly, although he isn’t a regular.

“I think it was taken a bit far in the sense that I think he meant well but just didn’t have a clue how to word it.

“I wasn’t actually offended by being referred to as a bit of meat but I wasn’t particularly flattered either. I found the situation funny.”

Ciara added: “I didn’t expect it to get the reaction that it did, I found it funny and so did my friends but to blow up as much as it did was a shock.

“I actually posted it one or two days after receiving the voice notes just because when I first listened I was too uncomfortable to continue on but after listening to the clips in their entirety I found the humour in it.”