GUESTS at a wedding were stunned when the best man “forgot the rings” and sprinted from the room.

But rather than witnessing a disaster unfold, the lights dimmed and guests were treated to a hilarious Lord of the Rings parody video.

The clever trick was played by Kaylee and Robert Garrick at their Lord of the Rings-themed ceremony in Inverness.

The couple from Shetland had spent hours organising the filming of the Return of the Ring, which featured close friends and family as actors, and told the story of how the missing rings were recovered.

Around 140 guests were present at the wedding at Bogbain Farm when the ceremony took an unusual turn.

The Shetland couple are shown standing in front of their guests while a humanist asks for the rings.

Their best man, Bryan Garrick, pats his suit down before running out as the bride yells: “You’re joking!”

The light at the venue dims and Bryan is seen running away from the camera across an open field.

Bryan is shown signalling down “Peregrin Took”, more commonly known simply as Pippin in the hit series, before clips from the original films have been edited in.

The ring is then picked up by “Gandalf” who knocks a door with a sign titled “Hobbiton” – which is actually Kaylee’s house in Shetland.

One of Kaylee’s dogs, Fenton, is then shown answering the door before a meeting is held in Kergord Woods.

A remake of a scene from the “Fellowship of the Ring” is then staged showing Kaylee’s friends dressed up in full hobbit-style clothes as they meet with Gandalf.

As the group argue over who will accept the mission, one of Kaylee’s dogs barks as a subtitle reads “I will take the ring”.

The sheepdog is then shown running along a beach with Gandalf and the rest of it’s canine brood as they make their way to the airport.

A shot of an aeroplane then comes across the screen before the lights are shown coming back on at Bogbain Farm where the guests have been watching on.

The best man, along with his four-legged-friends, is then shown approaching the newlyweds to return the rings after their epic adventure.

Kaylee, a Scottish Ambulance Service technician, shared the clip on her Facebook page on Saturday.

She wrote: “On the 3rd of August 2018, just over 140 people joined us at Bogbain Farm to celebrate us getting married.

“The location was beautiful, the setting marvellous, romance was in the air and the ceremony was all going perfect…until the best man was asked for the rings…

“This is what happened in that moment. Can not thank everyone involved in this video enough.

“This has probably got to have been one of my most craziest schemes yet, and yet you all joined in laughing all the same. Here’s to the next adventure.”

The clip has since attracted over 8,000 views and dozens of comments from impressed viewers. 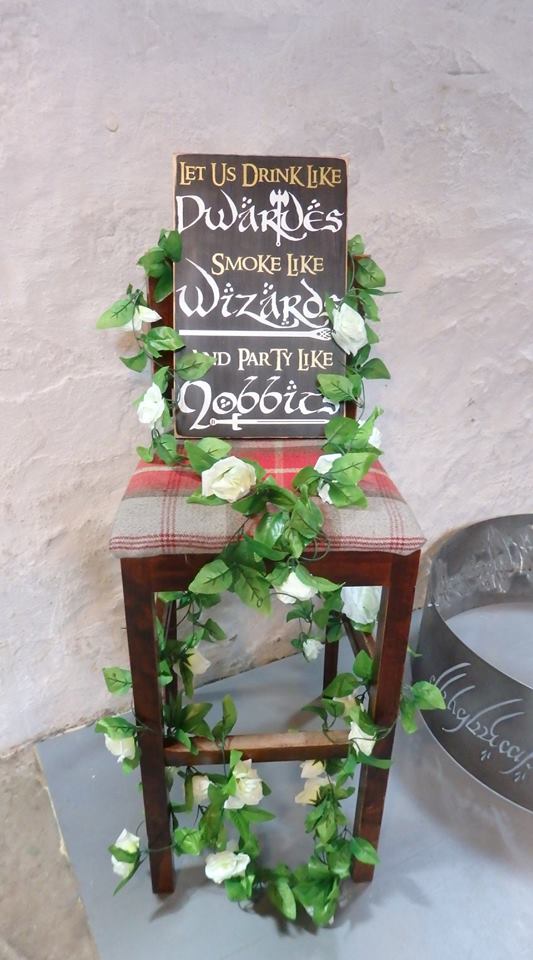 Jennifer Gieser said: “Love it. Absolutely the best. So creative. Best part, of course, ALL of your gorgeous puppers.

“Thanks for sharing your very special day with everyone. The Shetland Islands are on my ‘must travel to’ list. Beautiful.”

Cindy Shelton wrote: “’I’m laughing and crying at the same time – just the most amazing wedding ever.”

And Nicola Halsall said: “That’s so cool! Congratulations.” Speaking today Kaylee said: “We never really planned on having a Lord of the Rings themed wedding, it just kind of happened.

“We were originally going to get married in Shetland but everywhere looked the same and I wanted somewhere that represented me and Robert.

“We seen an advert for Bogbain Farm and noticed it was dog friendly so went to see it and it just looked like Hobbiton. I’m a massive Lord of the Rings fan so knew straight away we had to get married there.

“Our house is called Hobbiton and as you walk in I have this big Lord of the Rings mural up. The funny thing is Robert isn’t really a fan. He’s watched it but wasn’t very impressed.

“The filming took days. Each scene was a day on it’s own and then the editing on top of that.

“All my friends were great as soon as I called them and asked if they would help, they were up for it.

“My bridesmaid almost broke a leg playing Gandalf and me and a group of friends were absolutely swarmed by midges during scene in the woods. I looked like I had Chicken Pox after it all. The filming was just such a laugh.”