A SIDE-splitting video shows two tradesmen laugh themselves helpless as they watch a very short biker try to get on a very big motorbike.

Joiner Gary Owen filmed himself and bricklayer Andy Burke erupting into laughter as they watched the motorcyclist trying to balance on a bike that was clearly too large.

The footage, filmed at a service station near Lytham St Annes, Lancashire on Tuesday, begins with the unknown biker prepping their gloves ready to mount the bike.

The diminutive motorist then appears to take a hilarious run up before trying to swing their leg over the bike.

However, their little legs appear to be too small and hit the top of the saddle where it rests for a few extra seconds before sliding over to the other side.

They then shimmy their body along while attempting to straddle the bike before repeatedly wobbling around from side to side trying to balance on the bike.

Both the bikers feet can be seen lifted from the ground as Gary and Andy burst out laughing. 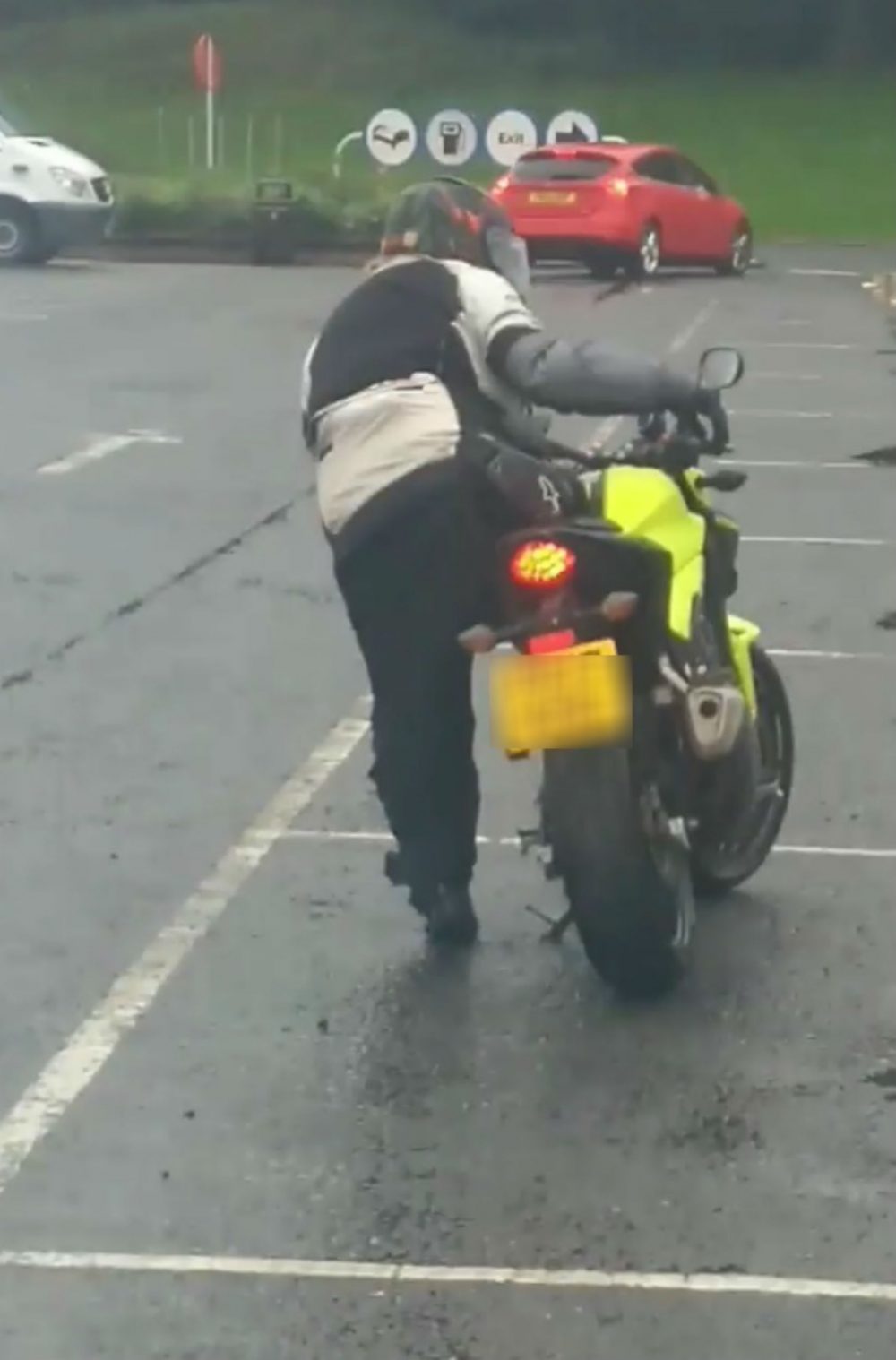 One of them can then be heard saying “Should’ve bought as smaller bike. F***ing hell.”

The biker is then shown continuously shaking around trying to work out how they’re going to kick up the bike stand to get on their way.

At this point the balancing biker is shown trying to remain still while one foot is off the ground and the other foot is touching the wet floor with their tip toe.

After realising this isn’t going to work, they then begin shifting their rear end to one side and back again.

A voice can then be heard from the van suggesting that the biker gets stabilisers fitted to the bike. 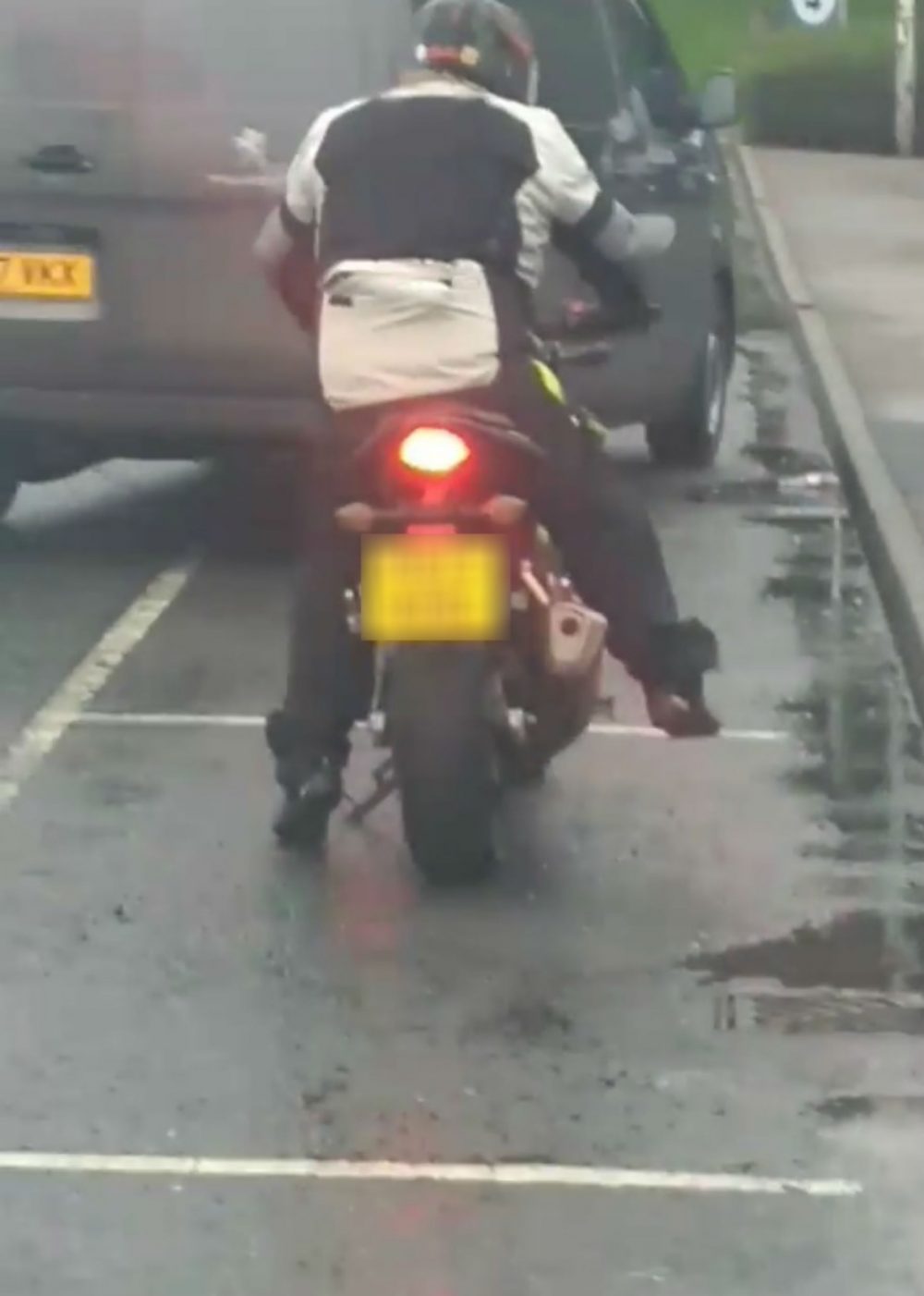 While another voice says: “Should have bought a trike.”

Eventually, the biker pulls one foot up and uses the other leg to push itself off before the biker is seen driving off into the distance.

Hilariously, throughout the whole clip, 90’s tune I need a Miracle by Fragma can be heard playing on the music system in the background.

Gary, 47 uploaded the clip of him and workmate Andy bursting into laughter during the whole incident onto Facebook on Tuesday.

He wrote: “Call for a brew between jobs and you just know when you’re in for a bit of comedy entertainment. This has made me absolute day.” 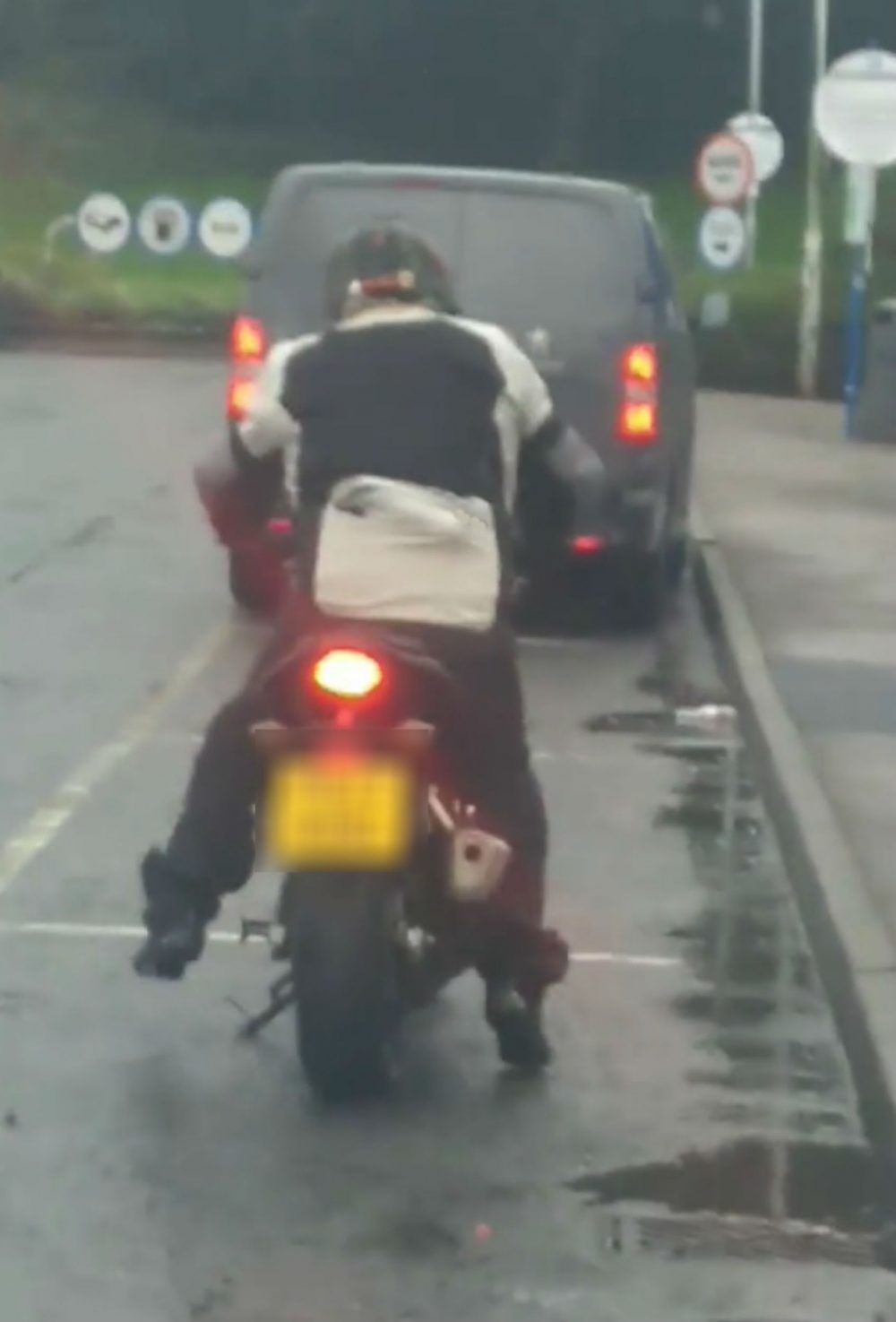 The clip was shared across various Facebook groups including Tarquin Smythe’s where it attracted over 37,000 views.

He captioned the clip: “When you just need that few extra inches. #tiptoes #balancebike”

Idiot UK Drivers Exposed also shared the clip where it attracted a further 80,000 views and thousands of comments.

Frank Poppy wrote: “Ten marks to that person for perseverance.”

Jenny McDermott said: “Maybe he should get some stabilizers!”

Ashley McQueen wrote: “How the hell did he or she pass their test.”

And Mark Sheena Easton said: “Comical – Yes.But equally a danger to himself and other road users.”

Speaking today, Gary said: “I just pulled in the services getting a brew on the way to a job.

“I couldn’t help it. I knew the minute they walked past my van it was going to be funny.”