‘Bobby, swing on the bar,’ Hearts goalkeeper Zdenek Zlamal relishing cult hero status at Tynecastle as he reflects on nomadic journey to Scotland

‘Bobby, Bobby, swing on the bar,’ has become a regular refrain at Tynecastle this season. Hearts’ new cult hero is only too happy to oblige.

After a nomadic existence spanning spells in Italy, Spain and Turkey as well as his native Czech Republic, Zdenek ‘Bobby’ Zlamal had finally found somewhere to hang his hat – and has been welcomed with open arms by the locals.

The 32-year-old goalkeeper has become an immediate fans’ favourite, with his acrobatic warm-up routine becoming a viral hit among supporters and his penchant for dangling from the woodwork on request delighting the punters. 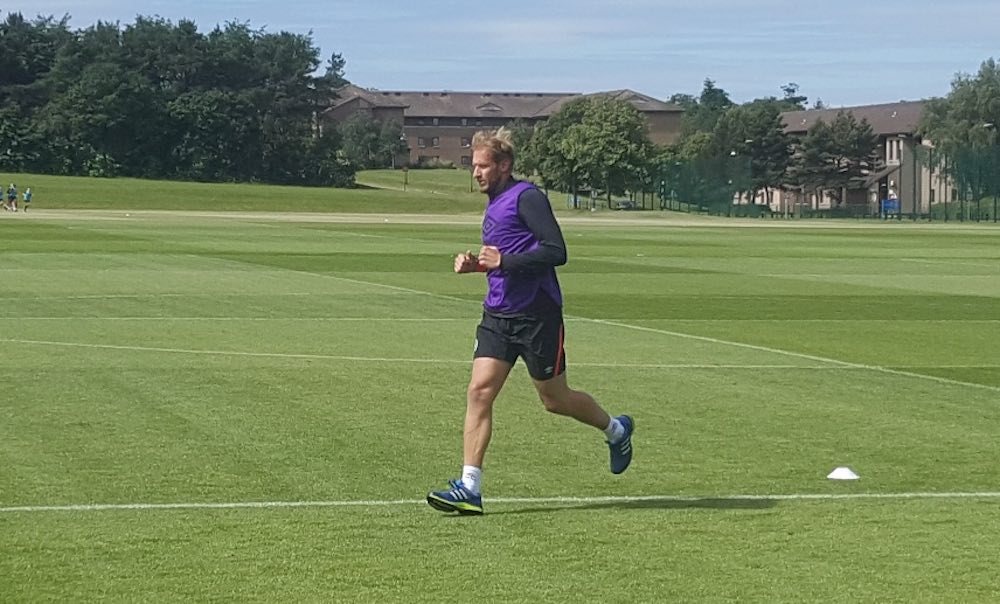 There is a touch of the Gorgie Grobbelaar about Zlamal.

However, he is no novelty act. Zlamal has been a safe pair of hands between the sticks during the Jambos fine start to the season, turning in a host of excellent showings and holding off the challenge of Republic of Ireland international Colin Doyle.

“It is a nice feeling to hear the fans chanting for you – although if the match is still in the balance I don’t like to swing on the bar, I need to stay focused,” he smiled. “If I do that, then we concede a goal and lose the match then I could be in big trouble with the manager!

“But I hear it and appreciate it and, after we win, then I will do it. We all play football for the fans and I want to make them happy. It’s a fun relationship.

“I see Hearts fans on the street and sometimes they will shout ‘hey Bobby, swing on the bar’ – I am on the street, I don’t know what they want me to do!

“The supporters at this club are the best I have ever seen. I remember when it was announced that I was joining Hearts, and I had not played a match yet, but people were already sending me messages saying ‘welcome to our family’ and that makes you feel wanted. You need that as a new player.”

That has not always been the case for Zlamal.

As a fresh-faced 23-year-old he joined Udinese and, with little hope of dislodging the exceptional Samir Handanovic – now undisputed number one at Inter Milan – he was farmed out on loan to Cadiz and Slavia Prague.

A move to Bari in 2011 proved similarly ill-fated and he swiftly returned to the Czech Republic where he once again excelled with Sigma Olomouc and Bohemians, earning a transfer to the Turkish Super Lig with Alanyspor last year. That lasted just six months amid managerial changes and mass upheaval to the playing squad.

However, Zlamal is reluctant to write off any of these decisions as regrettable, particularly his ‘goalkeeping school’ in Italy.

“I was young when I went to Udinese and there were a lot of challenges,” he recalled. “I was in a new country, did not get many opportunities and was sent out on loan to other clubs and did not always play. It was a tough experience.

“The number one goalkeeper at Udinese was Samir Handanovic, one of the best in the world. I went on loan to Cadiz and their goalkeeper was Kiko Casilla – he went on to play for Real Madrid. So I was a little unlucky.

“I had to grow quickly, be strong and I always tried to be a positive person. I always worked hard and tried not to be too emotional – I stayed professional and steady, and always kept belief.

“It was like a school in Italy for me. They teach you a lot of technique and tactical aspects of being a goalkeeper. Whether in Turkey, Italy or Spain, I will always say ‘this was a good experience’ because everything helps you grow and improve.

“But now, finally, I feel like I have found a home. I hope I can stay here for as long as possible.”

He smiled: “Edinburgh is a beautiful city and in Scotland you are surrounded by nature. On the weekend after games my wife always wants to go walking up the hills or enjoy the nature. Sometimes I have to say ‘come on, I am too tired’. But we will go to enjoy the views soon.”