A WOMAN has published images of a hit-and-run motorist she claims rammed her horse, injuring the animal and throwing her from the saddle.

Vicky Badrock’s pictures show bleeding cuts in the side of the horse, possibly caused by a smashed wing mirror.

The 20-year-old carer also photographed the Jaguar driver, claiming he stopped to shout about the damage to his car before driving off without leaving his details.

Vicky claims the accident, in Marple, Stockport, happened when the “bullying” driving tried to squeeze through a tiny gap between her horse and a parked car.

The incident has left the horse, called Hugo, with a swollen ankle as well as cuts to his body. The vet also prescribed painkillers to Hugo. Vicky suffered minor injuries to her back and ankle as a result of being thrown.

Vicky, from Woodley, Stockport, uploaded the photos on Facebook on Sunday with the caption: “Does anyone know who this man is?

“He has hit Hugo with his car. it would have taken him 30 seconds to wait as there was a parked car on the other side of the road.

“Because he was impatient he’s hit Hugo. Hugo has reared up and I’ve come off him. He cut all his body and Hugo has a swollen leg, all because he couldn’t wait 30 effing seconds.

“No apology or anything he was more concerned about how much his car would cost to fix. No concern for me or Hugo at all.

“He drove off without giving me any details so he’s getting posted all over here and the police have been informed. I’ve never been so angry in my life.”

In the images posted by Vicky, they show the damage the driver caused to Hugo.

A few of them show a cut along his chest, which has a drop of blood dripping from it.

Other images show the cuts above the horse leg and part of his ankle looking swollen.

Vicky has also taken an image of the road, which shows pieces of the car’s wing mirror and scuff marks caused by the horse’s hooves.

Speaking today she said: “I’m just absolutely disgusted there are people like this. 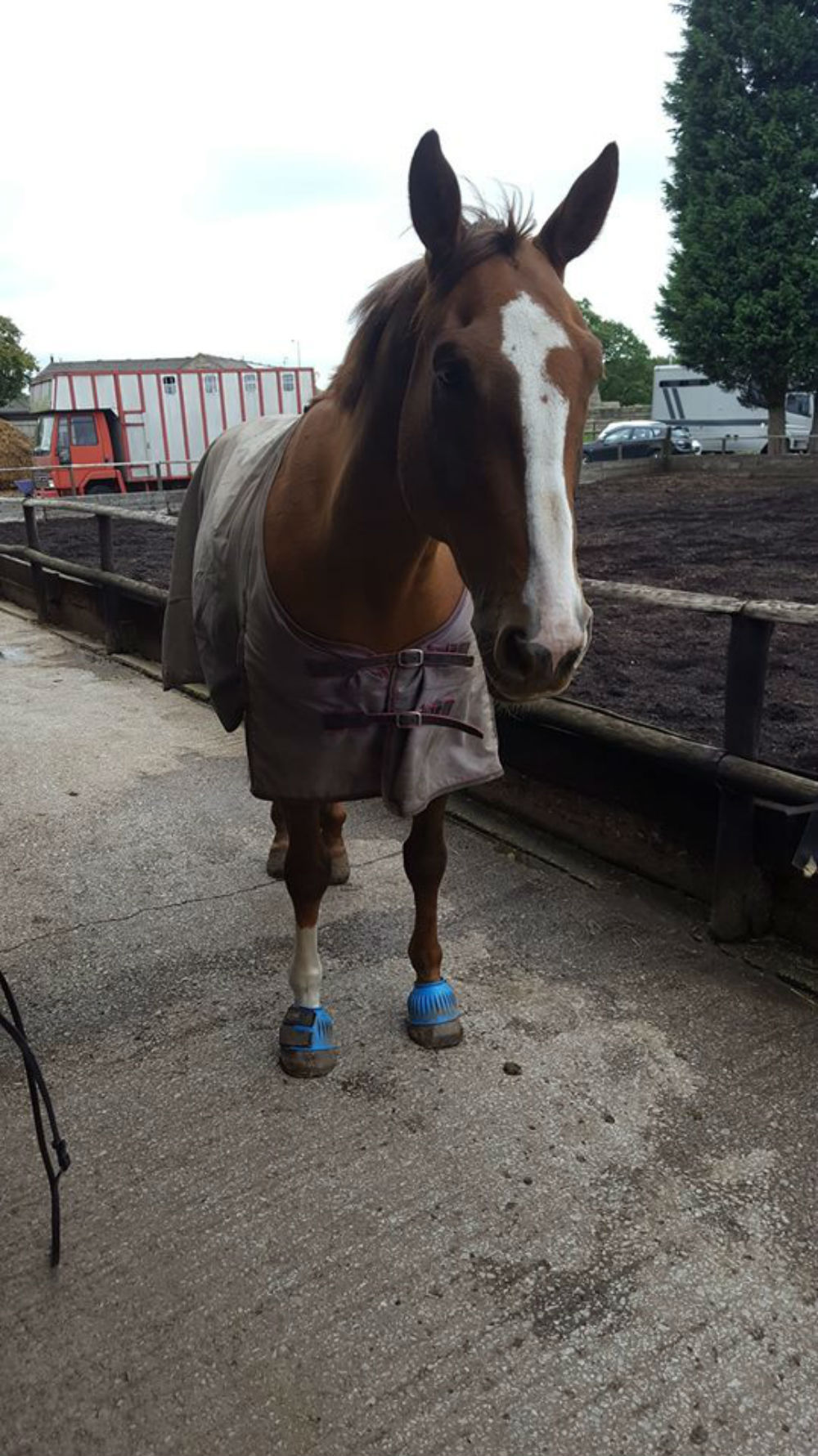 “I was shouting at him (understandably) and all he had to say to me was horses shouldn’t be on roads.They should be in horse boxes and that we were ‘going too slow.’

“Even though it would have taken him 30 seconds to wait and go round us when there was more space instead of trying to plow through resulting in me and Hugo getting hurt.”

“Hugo is luckily okay he has had painkillers and is having a week of rest. His leg is very swollen and he is cut but hopefully he should be okay in a week’s time.”

Paul Barnes, said: “What an absolute t****r. I hope he is ok. You should carry a cam on your jacket evidence it all. Poor Hugo.I hope you find this d**k.”

A spokeswoman for Greater Manchester Police Said: “Shortly before 12.20pm on Sunday 30 October 2018 police received a report of a collision between a car and a horse on Waterside in Hawk Green.

“The rider of the horse was not injured but the horse is believed to have suffered a cut to the leg. It is not thought to be life-threatening.

“The driver of a dark Jaguar car failed to stop at the scene.