A LABOUR Councillor and professor has been blasted for a “racist” tweet aimed at cabinet minister Humza Yousaf.

Arthur has sparked outrage on social media, with many people blasting the councillor as a racist.

Dr Arthur, a professor at Heriot-Watt University, Edinburgh, has since taken down the tweet from his account following the backlash.

The councillor has since issued an ‘unreserved apology’ over his tweet but flatly denies any racist intent.

Arthur posted his tweet last night (WED) just after 10pm, and within minutes was being criticised for his poor judgement.

DonBeanleone said: “You’ve crossed the line here, but you are so busy telling yourself how clever you are, you can’t see it”.

JohnTudor1 did a poll of his own.

SabenCallaghan added: “I’m going to think kind thoughts and assume you have been hacked, no one who says they’re a trade unionist, as you do, could possibly believe this is acceptable”.

Happytroll69 wrote: “Are you going to say your account was hacked or is it just a ‘misunderstanding’”.

He wrote on his blog: “Late yesterday evening I got around to tracking down reports I had seen earlier in the day that Humza Yousaf had (apparently) been inconsistent in explaining why he became politically active.

“In one interview he had cited the 9/11 attacks and in an earlier one he gave the Iraq War as a reason.

“In a move which I accept was cynical, I created a Twitter poll to highlight this. My decision to do this was not based on his or my race. 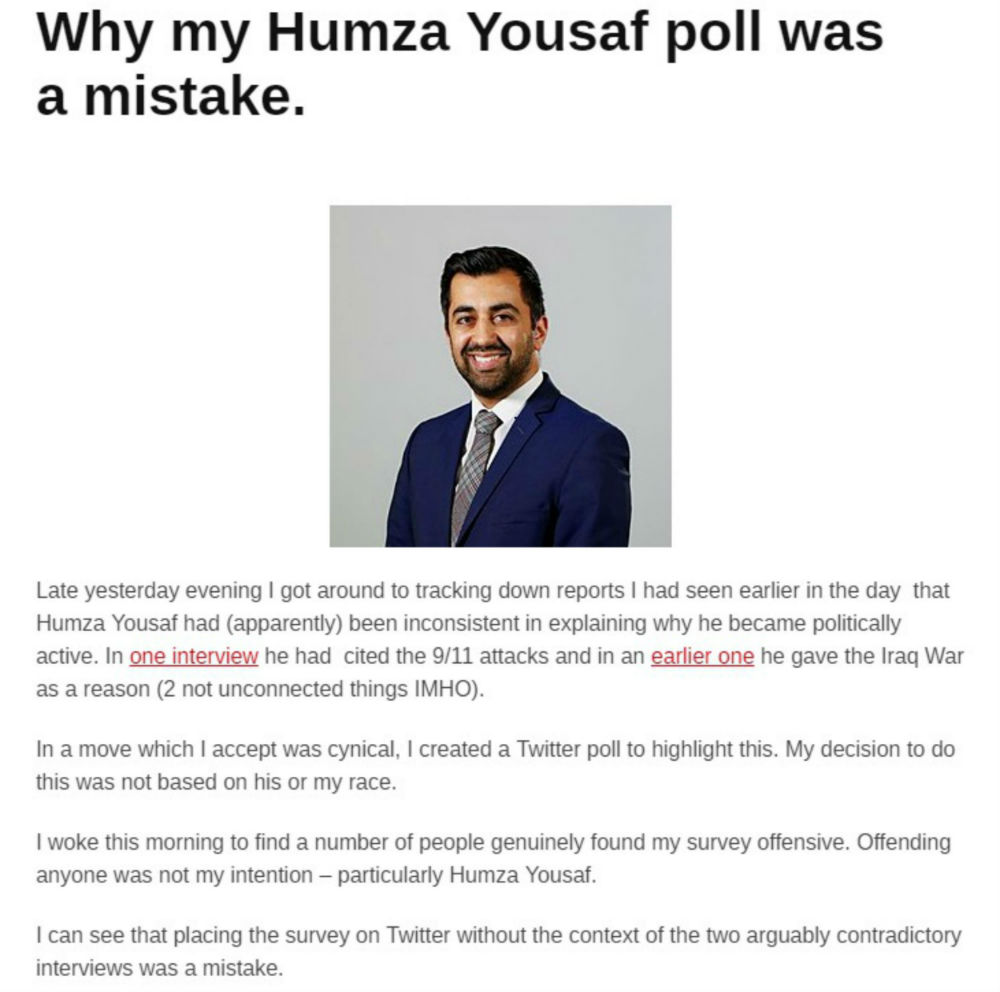 “I woke this morning to find a number of people genuinely found my survey offensive. Offending anyone was not my intention – particularly Humza Yousaf.

“I can see that placing the survey on Twitter without the context of the two arguably contradictory interviews was a mistake.

“Clearly, Humza Yousaf is not above criticism, but I should have thought more about his race and faith (and how others too often choose to use this against him) before triggering the poll.

“I have therefore deleted the poll and I am more than happy to meet with Humza Yousaf to discuss it.

“Let me be clear – this is an unreserved apology”.

Humza Yousaf responded in a tweet: “Thanks to those who’ve highlighted nasty tweet by Lab Cllr @ProfScottThinks – he has now deleted it & (kinda) apologised.

“Hadn’t seen it myself, I muted him a long time ago, he seemed to constantly troll me for reasons I cannot understand as I don’t think we have ever met.”

A spokeswoman for Heriot-Watt University said: “We are aware of the matter and have no further comment at this time.”