The Last Days of Mankind – a heartbreaking documentary of conflict 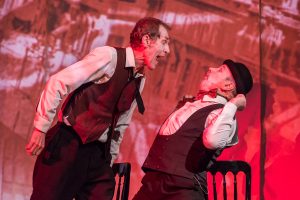 IT’S A DECADE and a half ahead of fin de siècle Vienna and cafe bar culture and cabaret are in full swing.

The assassination in Sarajevo of Archduke Franz Ferdinand, heir to the Austro-Hungarian throne, shatters the merriment and catapults the world into hitherto unknown atrocity, as the Great War takes centre stage. This is how it happened.

Viennese scribe, Karl Kraus’ Dadaist musings in The Last Days of Mankind, on the absurdity of a gory combat that saw Austria, Hungary, Germany, Bulgaria and the Ottoman Empire lock horns with the Allied powers until nine million lives were spent, is epic and affecting.

This bold interpretation, presented to audiences at the invincible Leith Theatre by co-directors, Scot, John Paul McGroarty, of Yard Heads company and Yuri Birte Anderson, of Germany’s Theaterlabor, in the play’s first major outing for more than 20 years, is a colourful and uncomfortable ride.

Satire is a sharp tool for impelling us to take our hands from over our eyes and study hard truths as the 100th anniversary of the Armistice trots them out. Kraus, who continued to work right through the war, charting important details and ironies, is a master of sarcasm and black humour, and saw the crazed dash for battle as just that.

Avant garde theatre, cabaret and a fine cast from companies from across Europe – not irrelevant on the eve of further Brexit decision-making – serve up a feast of contradiction to chew at long after the show is over.

From the absurdity of priming innocent young men as brave warriors in a battlefield unknown, to the might of the propaganda machine that propelled conflict forward and the merciless slaughter of millions, the grand scale of the event takes convincing residence in this arena.

Wonderful physical interpretations of the rifles being loaded and fired, despicable carnage and the maimed, wounded and lunatic casualties, are disturbing and grotesque. Poignant scenes of love lost during compulsory postings and time misspent on a grand scale are portrayed, as the air of insanity extends from the shell-shocked victims to the politicians, who progressed this dark travesty, mapping out a template for a second, two decades on.

Cabaret tables were laid out ahead of the main stage as Olivier-award-winning, menacing crooners Tiger Lillies, faces painted up like Halloween ghouls, narrate the sorry tale, and mock the sentiment that its an honour to die, starve and slave for your nation.

Powerful images of soldiers marching off to war projected in giant film across the front of the stage could not, for me, help but evoke the sad young battalion from Leith killed on a train in Gretna on their way to Gallipoli.

It did not need a cast member to heed warnings about extremism as they apply to today.

First shows of an Edinburgh writing festival have been announced