FALKIRK manager Ray McKinnon admits Dennon Lewis has been left ‘devastated’ after the young striker was a victim of racist abuse from his own supporters.

Lewis, 21, endured the slurs as the Bairns suffered a chastening 4-2 defeat in the Scottish Cup against local rivals Stenhousemuir on Saturday.

A swift statement from the Championship club confirmed the complaint, stating ‘we wholeheartedly condemn the abuse received by Dennon and will work to identify those responsible’. 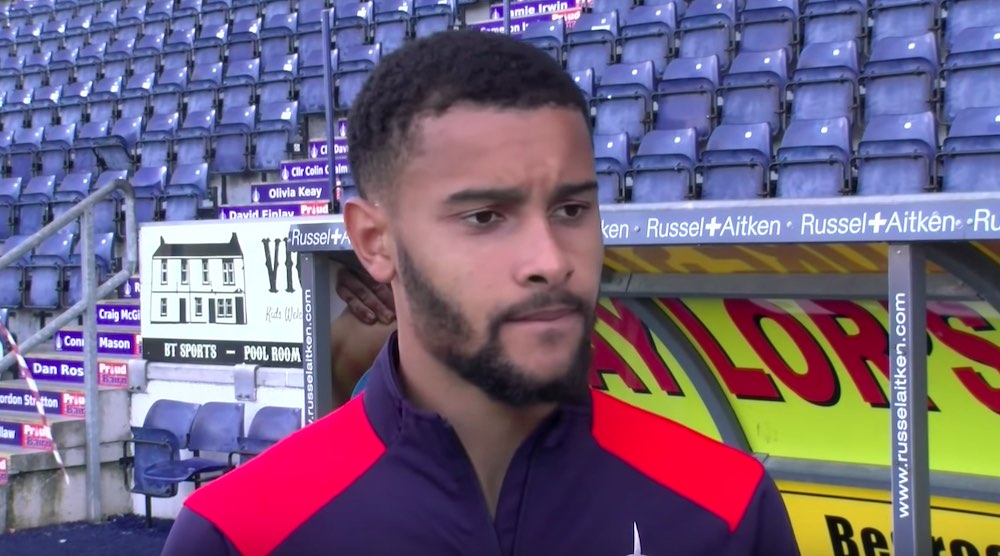 McKinnon had a heart-to-heart with Lewis on Monday morning and revealed the young attacker has been deeply affected by the incident, adding that there is no excuse for allowing frustration to boil over into vile taunts.

“He is very, very upset by it all,” McKinnon said. “He was devastated and I’m just glad he came forward and said something. It’s never nice to watch someone go through something like that. It’s totally unacceptable and we don’t want to see that happen to any player.

“Dennon will get all the support he needs. He was in speaking to us about it on Monday and we’ll do everything we can to help him through this.

“We don’t need that in football, there’s just no excuse for it and I’m delighted the club have been so pro-active in making a statement.”

Lewis, who has scored two goals in 19 appearances since making the move north, is living away from home for the first time after joining Falkirk from Watford last summer, exacerbating a tumultuous few days for the attacker.

And McKinnon concedes he may be in no frame of mind to feature in their upcoming Championship fixture against Inverness on Saturday.

“Whether he’ll be in the right frame of mind to play at the weekend is something we’ll just need to manage,” he acknowledged. “We’d like him to be, but Dennon’s going through quite an experience.

“We are talking about a young kid away from home on his own – up all the way from England – and it’s not nice for him. He’s struggled with it and we’ll give him all the time he needs. If he’s not available on Saturday, we’ll get on with things.”

In addition to shining a light on the reprehensible behaviour towards Lewis, Falkirk’s club statement also pointedly noted ‘there has been a growing number of unacceptable incidents of abuse by Falkirk fans towards members of staff and players at our club’.

With the Bairns sitting at the foot of the Championship and having crashed out of the Scottish Cup in humiliating fashion, the anger among the fanbase is palpable.

“I’m sure nobody would like to be abused going to their work and it’s not helpful.

“We need to stick together. That’s what a club does; rally round when things are tough. All we ask from the fans is that they stay strong and try not to let their feelings become personal because there are people working so hard to change it for them.”

He added: “It’s important to say that our fans have been brilliant in my time here. A small minority has stepped totally out of line and must be dealt with – but the majority have been magnificent.”

DENNON Lewis has broken his silence regarding the ‘disgusting’ racist abuse he suffered from his own fans, insisting the vile taunts ‘crossed a line’.

Lewis admits he has been left stunned by the barbs and, although he can understand the frustration of the Falkirk fans, is adamant a minority went too far.

The 21-year-old, who signed a one-year contract with the Bairns after leaving Watford last summer, has hinted the incident has cast doubt over his stay at the club, confirming his ‘future is unclear at this moment’.

In a statement posted on Twitter, Lewis wrote: “I have never gone through a period like this in my life.

“From a footballing standpoint things are not going as planned for anyone involved at the club. From a personal standpoint, never in a million years would I have expected to be subject to racial abuse from Falkirk fans.

“I understand the frustration and anger. As a lover of football myself, all you want to see is your club do well. However, for me this is a line crossed and the abuse received is disgusting.

“Whilst the future is unclear at this moment in time I am still a Falkirk player and will try to do my best for the team and support everyone involved with the club.

“I appreciate the messages received and I know this doesn’t embody the Falkirk fans in its entirety. Please understand where I am coming from with this message and know that I will not and cannot stand for this.”