AN amazed car passenger caught the moment a paraglider landed right next to a 60mph road amid the splendour of the north-west Highlands.

Richard Zelinski managed to capture the paraguilder whilst Anne Wood was driving past Knockan Crag on the A835.

The pair were amazed as the paraguilder landed just a few feet from them.

Anne uploaded the footage to a couple of local community Facebook pages shortly after the incident on Thursday where users also shared their appreciation for the clip.

She captioned her post: “Knockan. Watch out for low flying tourists on the road.”

The video shows the paraglider landing on the grassy verge of the road just a few metres in front of Anne and Richard.

As he lands, Richard can be heard saying “Wow” as the car passes the man just moments after he lands.

The pair can be heard laughing in amazement as they can’t believe what they’ve just seen.

More photos show the unknown man in midair as he flies around the Scottish Highlands.

Another commented: “Should really be reported for dangerous driving.”

In response to this, another person commented: “Cool? – bl*y dangerous!”

Earlier this year, a paraglider was airlifted to hospital after crashing on hill fort in Aberdeenshire.

The 26-year-old man activated a beacon after crashing and injuring his leg.

A team in Houston, United States, alerted Police in the UK after the beacon’s signal was picked up by them.

He was airlifted to hospital with a suspected broken leg. 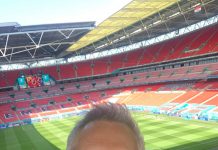 Antarctic glacier may be more stable than initially feared