Biker paralysed from chest down after horror smash

A BIKER has spoken for the first time after a horror road smash left him paralysed from the chest down.

Stuart McMillan, 51, broke his spine, leg and pelvis after colliding with another car while on his motorcycle.

The dad-of-two spent seven months in hospital and despite retaining the use of his arms he was left with no feeling below the chest.

Stuart from Gorebridge, Midlothian admits he wanted to give up in the early days of his recovery. 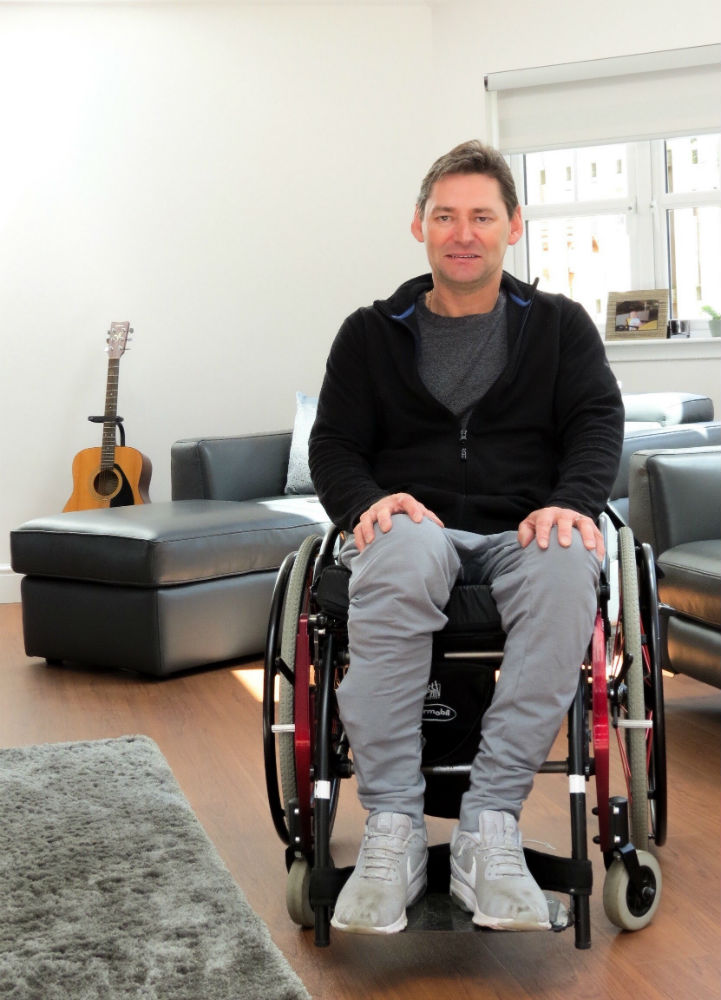 But through Spinal Injuries Scotland (SIS) he now dedicates his time to supporting other survivors of spinal cord injuries in the hope they too find a way to embrace life in a chair.

He said: “I knew immediately after the crash that I was paralysed as I couldn’t feel my legs.

“I remember asking the police officer to save themselves an ambulance call out and just put a bullet in me.

“I laugh at it now because looking back I know how stupid it sounds and that it was just the fear talking.

“But I’ve since found ways to lead a normal life and I don’t want anyone to feel the way I did.” 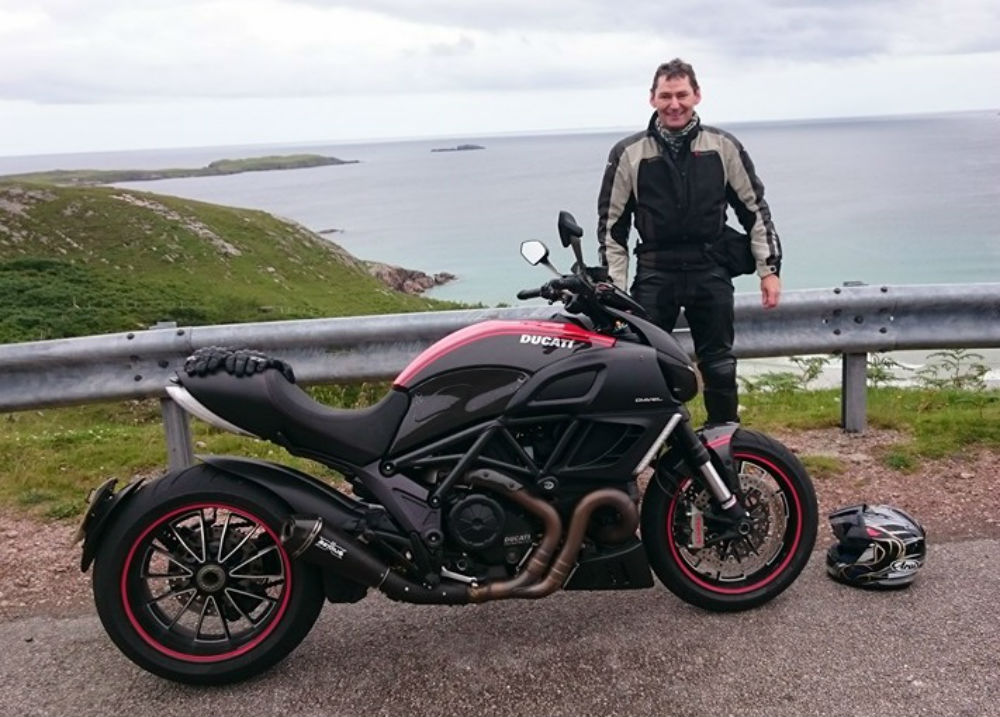 He was returning home from a gym session on his Ducati Diavel 1200cc on an unclassified road between Cockpen and Carrington in Midlothian when he collided with an oncoming vehicle.

Medics at Royal Infirmary of Edinburgh found Stuart sustained complete breaks to his T6 and T7 vertebrae, a fractured pelvis, broke his right leg and left wrist as well as six broken ribs.

He was transferred to a specialist spinal unit at Queen Elizabeth University Hospital in Glasgow where he remained an in-patient for seven months and had metal plates and bolts fixed to his spine.

During this time, devoted wife Lynda, 49 – to whom Stuart has been married for 28 years – visited every day alongside their two kids Erin, 18, and Matthew, 11.

Speaking ahead of the annual SIS summer meeting at Castle Semple in Renfrewshire,

Stuart added: “The medical care really was great – by sheer chance I even bumped into one of the first responders in the street once I left hospital so I was able to extend my thanks to her.

“But once you leave hospital you are kind of on your own and I simply would not be here if it wasn’t for the love and support from Lynda and the kids and other spinal injury survivors who you can learn from.

“Linda has had to adapt to a life she probably never thought she would and I do think about things like not getting to walk Erin down the aisle or be able to play with Matthew like I used to.” 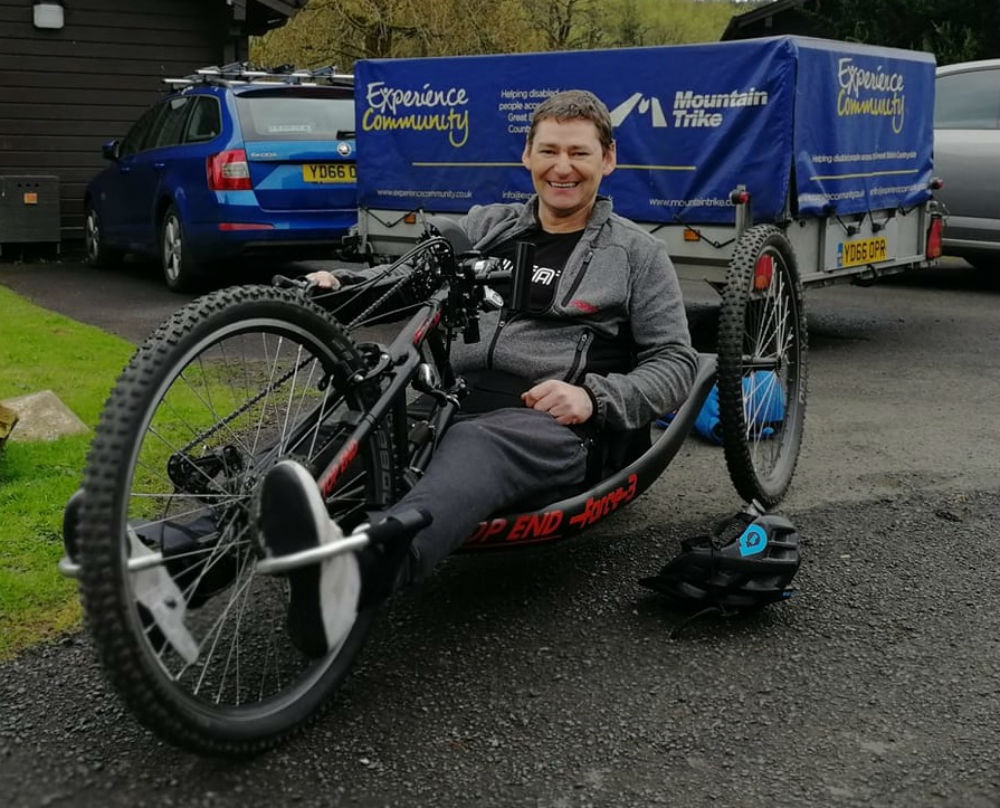 Stuart – who had been around and ridden motorbikes for 40 years – does not regret choosing two wheels instead of four.

His accident meant he could no longer work as a field production technician on the Forties Oil Field but he now volunteers as an SIS support worker across the south of Scotland.

The summer SIS event this year will be on Wednesday 3 July at Clyde Muirshiel Regional Park near Lochwinnoch.

The adrenaline-filled day gives spinal injury survivors access to kayaking, powerboating and hand-cycling with the aim of rediscovering their independence and offers them the chance to meet like-minded people from across the country.

Stuart added: “There is life after a spinal injury and no one should fear the chair – it’s as simple as getting back outside and surrounding yourself with the things and people you love.

“I might occasionally need help with silly things like closing the blinds but I can still drive my car or go to the pub with friends and even enjoy outdoor pursuits like sailing or hand-cycling.

“A wheelchair might change your life, but it certainly doesn’t stop it.”

For more information on the Castle Semple event contact Spinal Injuries Scotland at www.sisonline.org or call 0141 427 7686.