As Gus and I take our seats it’s apparent that we’re on the edge of a primeval forest with alien looking vegetation piercing through a dense layer of eerie mist.

Gus says: “65million stars out of five because that’s how long Dinosaurs have been extinct.” 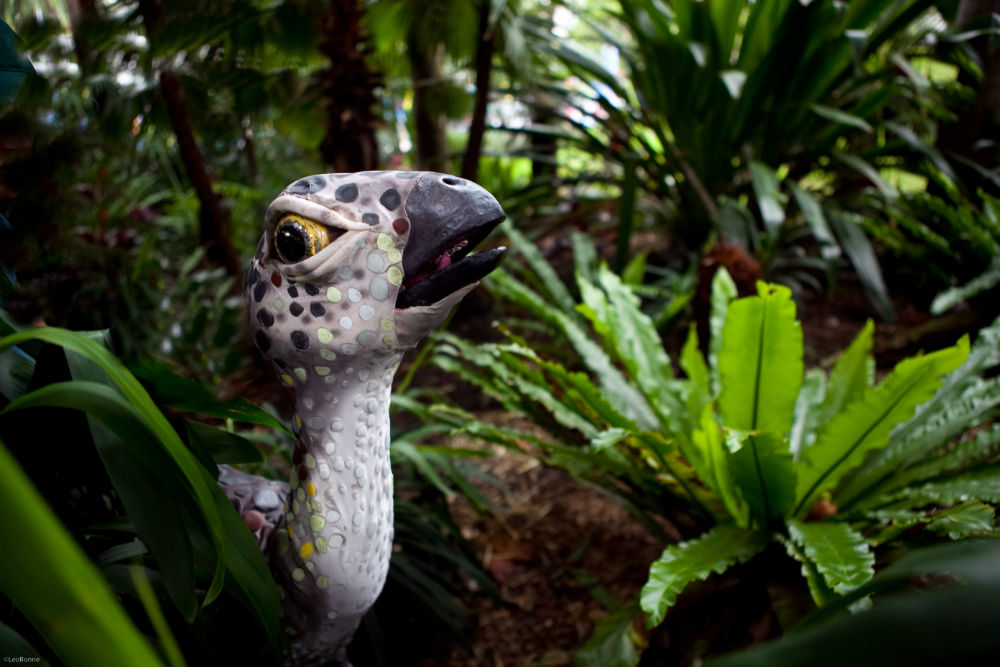 Photo submittedWe get comfy, guessing which dinosaurs we might meet and whether they might, maybe just possibly, be real.

With five minutes to go until the show starts the room thrums to the sound of chattering, inquisitive kids and rustling snack packages.

Suddenly, above the hubbub an ominous rumble rolls out from the mist and all eyes turn to the stage. Gus decides it’s either a t-rex or an erupting volcano and either seems perfectly plausible.

The sound fades and the chatter builds back up, children swap seats with siblings then swap back again, everyone seems to have ants in their pants.

BOOM! Another closer rumble, louder this time and everyone’s attention is locked back on the stage as our host emerges from the treeline.

Head Zoo Keeper Scott Wright, set out with a desire to make shows that inform and immerses kids in a prehistoric world and he’s certainly achieved that. The low hanging mist, oversized vegetation and rainforest soundtrack make it easy to get lost in his storytelling.

And then there’s the real stars of the show…

Over the next hour we’re introduced to half a dozen prehistoric creature puppets with life-like movement and expressions that draw us in and ignite our curiosity; adorable, beautiful, terrifying and deadly.

With each new specimen Scott invites children and parents up to help him tend to the Zoo’s stars, enlisting their help to feed, comfort and care for each one in turn.

We learn a lot in Scott’s company and laugh with him as he pokes gentle fun at the volunteers, clearly seeing echoes of his own passion in their excitement and awe.

The classic dinosaurs are here alongside recent scientific discoveries and Gus’s six-year-old palaeontologist mind was racing as he tried hard to file and retain all this glorious new knowledge.

Parents with a nostalgic fondness for David Belamey will immediately warm to Scott who appears to enjoy the performance as much as the crowd.