Hibernian defender Lewis Stevenson has paid a touching tribute to the ‘larger than life’ Junior Agogo after his former team-mate passed away in London yesterday at the age of 40.

Stevenson was stunned to be informed of the one-time Ghana internationalist’s untimely death, and recalled how Agogo made a positive impact on the squad during his six month spell in Leith.

Agogo finished his career at Easter Road in January 2012 after being signed by then manager Colin Calderwood; he made 14 appearances, scoring once. 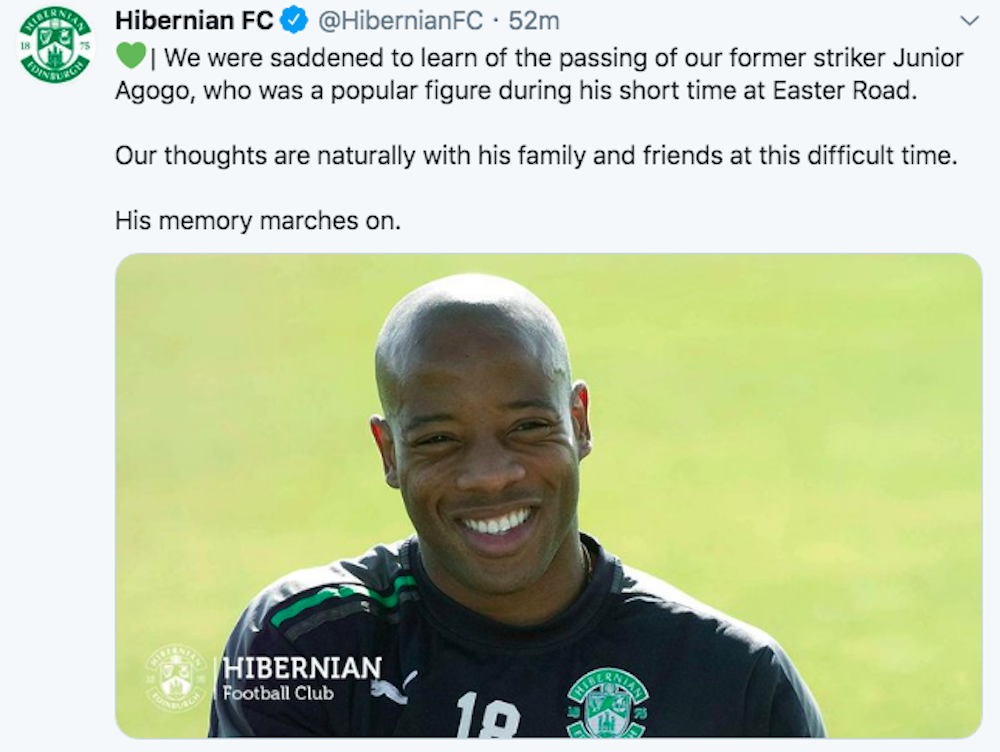 Just three years later, Agogo, who began his career at Sheffield Wednesday – played for Nottingham Forest and Bristol Rovers and also had spells in the US, Cyprus and Egypt, suffered a stroke and spent two months in hospital.

“That’s the first I’m hearing of that,” said Stevenson, after being told of Agogo’s passing.

“I have him on Instagram and he seemed to be living a healthy life.

“I knew he was into running recently so he must have been trying to get back to fitness.

“He is not someone I properly kept in touch with but he was a big figure and he came here with a massive reputation.

“This isn’t something you want to hear about, especially about a former teammate.

“He was larger than life and a real character, quite rightly.

“He came with a big reputation because he had done a lot in his career and scored some goals at the African Cup of Nations, which he used to always talk about.

“He used to moan about the direct football. He always wanted the ball to his feet and he wasn’t happy with the Scottish long ball tactics.”

While Accra-borb Agogo had a penchant for expensive cars, Stevenson admits Agogo was a joy to play alongside.

Stevenson added: “Off the pitch he was brilliant. There was no denying that he had made a bit of money in his career but he was really down to earth and he was a lovely guy with everyone.

“I’m sure he used to park his Maserati next to my Honda Civic.

“Maybe in a joking sense he would wind you up about things like that but you could take it because he was joking and he worked hard for the team and wanted the best for everybody.”

Hibs manager Paul Heckingbottom, who came up against Agogo on the pitch during his playing career south of the border, said: “It’s really sad news and the first I’ve heard of it. On behalf of the club and all our staff, I send my best wishes to his family.

“In football, we’re always competing against each other all the time but there is a tightknit group and you are part of a bigger family.

“Forty years old is nothing. It doesn’t matter whatever age someone is, it’s always sad.

“It tends to be more dramatic when it is someone young and someone who is perceived to be fit. It’s the last thing you expect.”