HIBS loan star Jason Naismith has joked that receiving the seal of approval from John McGinn has already piled on the pressure for his stint at Easter Road.

The 25-year-old is firm friends with Aston Villa and Scotland star McGinn, having first met at the age of 10 before emerging through the youth ranks together at St Mirren.

When news of Naismith’s loan switch to the Hibees from Peterborough United broke on deadline day, his pal was among the first to hail the move on Twitter, writing: ‘Top guy top player’.

McGinn retains legendary status in Leith, having won the Scottish Cup and Championship title following his move from Paisley, before earning the club £3 million when he joined the Villains last summer.

So, Naismith knows he has big shoes to fill as the latest ex-Buddie man to arrive at Hibs.

“I’ve known John since we were 10-year-olds at St Mirren,” said Naismith. “We grew up together and we saw each other every day so we are good pals.

“He’s put a bit of pressure on me with that tweet saying I’m a top player!

“But coming from him it’s a great compliment. He’s done unbelievably well for himself and he is a hero here. If I can achieve half of what he did here then I’ll leave with my head held high.

“He won the Scottish Cup and it took him to the next level. Hopefully, it can happen for me as well.

“John messaged me on my way to the medical and he’s delighted for me.”

However, Naismith revealed that he didn’t feel the need to canvass McGinn’s opinion about the transfer, with the former Scotland under-21 international more than familiar with the stature of the capital club.

“I didn’t need to phone him,” he continued. “It’s Hibs – you don’t need a sales pitch. I didn’t even tell John. I’m superstitious like that! I wanted it to go through and I was worried if I told someone it wouldn’t.”

Naismith, who was a mainstay with St Mirren and Ross County prior to joining the Posh last summer, has lifted the lid on a hectic day as the clock ticked down on the summer transfer window.

Despite making 50 appearances for the League One outfit last term, he was informed that he would be allowed to return north of the border – leading to fraught negotiations that left Naismith pulling his hair out. 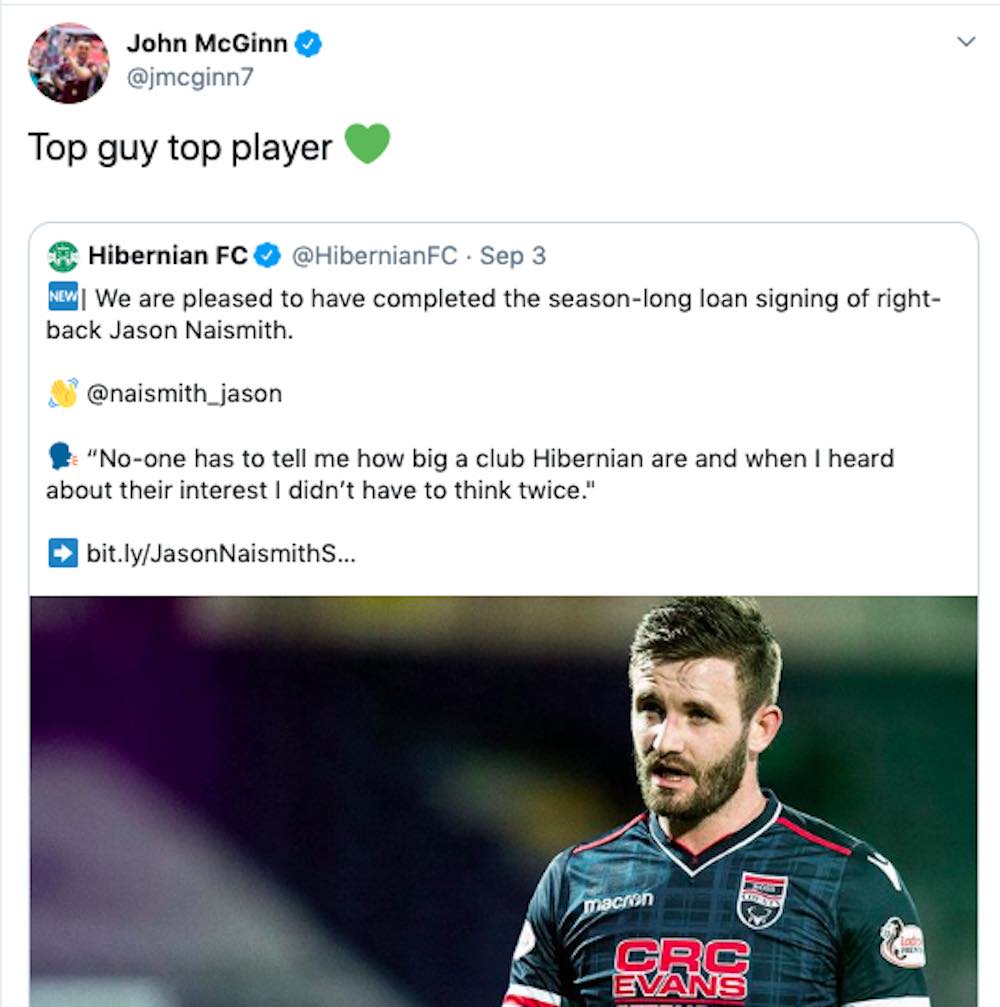 “It was a stressful day – it seemed to be on then off, on then off,” he continued. “I think I lost a few hairs on my head over it, just trying to get it done! Thankfully the two clubs got there in the end.

“I had to meet [Hibs’ head of sports science] Nathan [Ring] at St George’s Park on Burton for the medical, which is two hours away from Peterborough. It was a case of agreeing everything in principle and then trying to get here.

“It’s not the easiest place to get to and there were diversions on the road! I thought someone was trying to wind me up but I eventually got there.”

And Naismith believes arriving during the international hiatus will afford him a priceless opportunity to get accustomed to his surrounding, teammates and ensure he is ready to make his Hibs debut against Kilmarnock.

“It’s just good to be back in Scotland and with a really talented squad,” he told Hibs TV. “Hopefully, we can kick on and do well.

“The break’s come at a good time to get to know everyone and the surroundings, to bed myself in. I’ll be raring to go at Killie.”