HEARTWARMING video shows how a pet dog has struck up a very unusual friendship – with a wild rabbit.

Boris, a miniature pinscher, is regularly joined on his daily walk by the rabbit in Dunfermline, Fife.

Remarkable video shows the unlikely pair playing in a field and even in a street in the town.

The rabbit is seen running after his canine pal and playfully jumping over him in the clips, filmed by owner Mark Henderson.

Mark posted the clips to social media with the caption: “Don’t think the rabbit knows he’s a dog.

“Waits every day for him when I walk him #bestpals.”

The video shows Mark taking Boris for a walk, accompanied by the rabbit.

Boris and the rabbit can be seen standing side by side as Mark continues to walk past.

As Boris walks away, the rabbit follows and then runs towards Boris, 10, before jumping on him.

The inseparable pair are seen together in another video as Boris and the rabbit walk together down a quiet street.

Boris, wagging his tail, runs towards the pavement, and is once again followed by the rabbit.

A photo also shows the rabbit appearing to wait outside Mark’s house for Boris.

The video has captured the imagination of many in the comments and has left people falling in love the unlikely friendship. 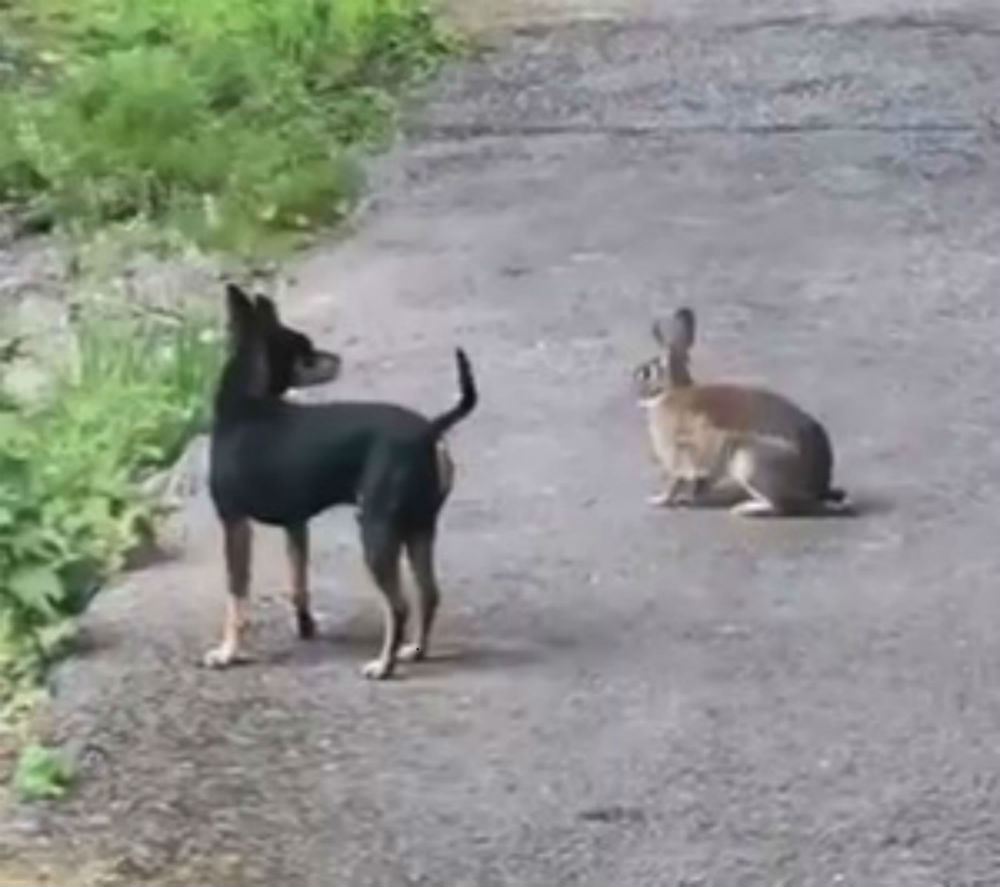 Kimberly Sollitt said: “That’s adorable! Thank you so much for sharing.”

Doreen Hainey added: “Aww waiting to play with him.”

Julie Cleverdon said: “Oh my God that’s amazing. I think you need to take that rabbit home with you.”

Tanja MacIsaac wrote: “Aw, that is a beautiful friendship!”

Linda Doran added: “You need to adopt the rabbit!”

Mark even said the rabbit tried to get into his house. He commented: “It’s crazy, everyday it’s there, even tried to come into the house.”

Speaking today, Mark said the rabbit waits for Boris when they go on walks.

He said: “The wee rabbit follows us about. It’s the only rabbit that comes out. [It has] been happening for a good few months now. He [Boris] just runs about with it.”

When asked whether Boris and the rabbits were best friends Mark said: “As good as dog and rabbit pals go.”