AMAZON has apologised after sending customers random items such as a toothbrush, tambourine and condoms – instead of the £300 Nintendo Switch they ordered.

At least a dozen disappointed buyers have complained to the online shopping giant that instead of expensive gaming gear they got unwanted items worth a fraction of the price.

Amazon has now launched an investigation to find out how this could have happened.

They have promised to refund customers, some of whom are furious that they ordered during Black Friday but will now have to pay full price.

Sharing a snap of the Amazon package, she wrote: “I want my money refunded. You have delivered and refused to take back (the) parcel which was smashed.

“Inside was supposed to be a Nintendo Switch £279, instead there was a David Walliams book.

“I have been onto Amazon trying to get money refunded now and been told I have to wait 24 hours.

“I need to go and buy the Nintendo from a different shop and don’t have the money to do it. What are you going to do about it?”

Steve Handy, from Worcester, also complained on Amazon’s Facebook page, writing: “I ordered a Nintendo Switch along with Pokemon Sword and Shield from Amazon which I purposely waited until the Black Friday deals to do so.

“It was on offer for £300 and I ordered it. It arrived today and as I opened, it was a laptop fan cooler that couldn’t be worth more than £10.

“After I called customer services they told me they couldn’t do anything about the fact that it’s gone back up in price now, I have to wait for my refund and then pay the higher price now the deal has ended.

“How is this fair? This was Amazons fault, not my own and yet I’m literally paying for it.”

Sharing a photograph of a pack of AA Duracell batteries and a box of washing powder, Lucy Henderson wrote: Certainly not a Nintendo Switch – disappointed birthday boy.

“Amazon can’t get us one until Wednesday even though we are prime customers with next day delivery. Two days too late when his birthday is Monday.

Dave Martin, from Bicester, Oxfordshire, wrote: “So I didn’t think things could get any worse with Amazon. You’re now blatantly ripping people off.

“Order a Nintendo Switch and it’s a ream of paper instead. Strangely you can’t get hold of Amazon. Explain that.”

Michael Gair, from Hemel Hempstead, Herts, said he received a facial hair trimmer instead of his console.

And after measuring the box that his Remington trimmer arrived in, he discovered that the Nintendo Switch would never have fit the box in the first place.

On Monday Vicki Carpenter said she was “heartbroken” after being sent a bed sheet instead of her son’s Christmas gift.

She said: “Ordered a Nintendo switch for our son for Christmas, delivery today and in the box is a bed sheet we never ordered.

“We phone your customer services to be told we need to return the bed sheet and that we won’t get a refund of £300 for up to a month, as you have no more Nintendo switch consoles to send out to us.

“So we won’t have the money to buy another console in time for Christmas either… so our son won’t have his Christmas present at Christmas. Absolutely heartbroken.”
?
And Jenny Breeden? from Crawley, West Sussex, got a box of dog food and washing up liquid instead of console.

Amazon agreed to send her a new console but Jenny claims this time she was sent a packet of air freshener,

She wrote: “I have also reported this to the police as feel it is fraud and needs
thoroughly investigating.”

Paladin Shaz, from Salisbury, Wiltshire shared a snap of a shaver and electric toothbrush next to his Amazon box.

He wrote: “I had the same thing happen to me today. Ordered a Black Friday deal with a Nintendo Switch and a game but got this instead.

“The kicker is they expect me to go out of my way to return it as the item I ordered via Hermes and even tried to push a partial discount/refund back.”

Jake Lawrence, from Leicester, wrote: “What the hell! I ordered a switch and I’ve been sent a microphone and a tambourine!

“I’m happy to return but when am I getting my Switch? I’ve sent around £300 and haven’t got the right order”. 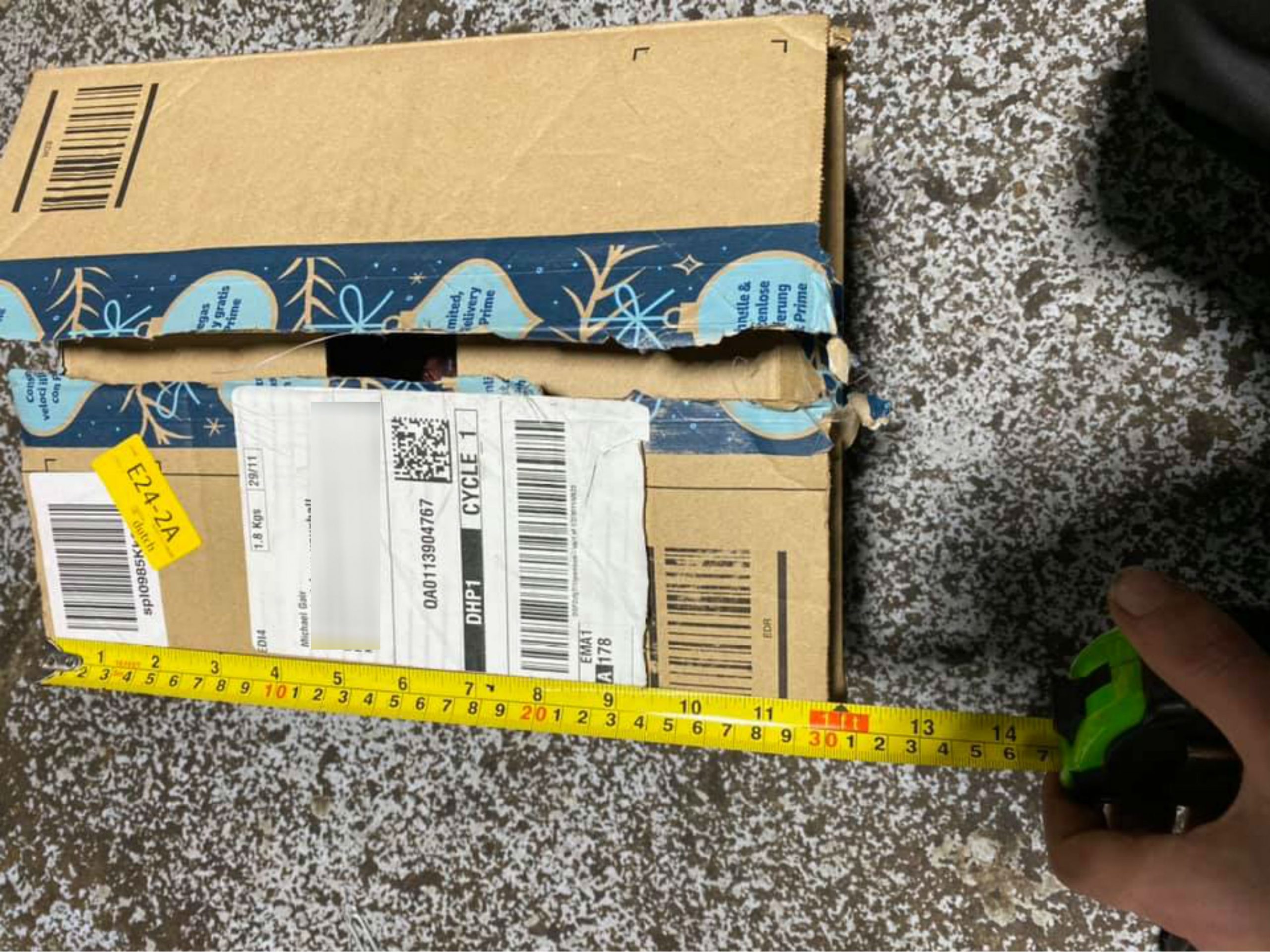 Sophie Hamilton, from Surrey, claims she received a bottle of “photopolymer resin” instead of her daughter’s Switch.

Sharing a snap of the box, Sophie wrote on Twitter: “Oh AmazonUk, while I appreciate you may be a tad busy at the moment, we have a severely disappointed child in our house at the moment who has just unwrapped the Nintendo Switch she bought with her hard saved pocket and birthday money.”

Paul Addicott wrote: “Ordered a Nintendo Switch from AmazonUK and instead they decide to deliver Lego.

“The person at (the) help desk is struggling to understand that the whole thing has been delivered with a clearly tampered label.

“We are sending that back to get a return payment, have to reorder again, can’t get the same deal so just buying the console.

The earliest reports of the problem date from October this year when a Twitter user known as Hughesy contacted Amazon back in informing them he had received a pack of condoms instead of his console.

Sharing a photograph of a box of 20 Durex Pleasure Me condoms, he wrote: “Yo is this a sick joke? I ordered a Nintendo Switch Joy-Cons and send me f*****g condoms…”

A spokesman for Amazon today said: “We’re really sorry about that and are investigating exactly what’s happened.

“We’re reaching out to every customer who’s had a problem and made us aware so we can put it right.

“Anyone who has had an issue with any order can contact our customer services team for help.”

University chosen by Amazon to compete in a challenge