TUI has been accused of “ruining Christmas for hundreds of children” who were left in tears after failing to meet Santa during a trip to Lapland.

Furious parents have blasted the holiday firm as “greedy” claiming the firm overbooked the event during last Saturday’s once-in a lifetime trip to Rovaniemi, Finland.

Parents who paid up to £2,000 described the day trip as an “absolute shambles” and “chaos” which resulted in even the Santa walking off.

And one mother said her child no longer believes in Santa following their disastrous, 2,800-mile round trip to northern Finland. 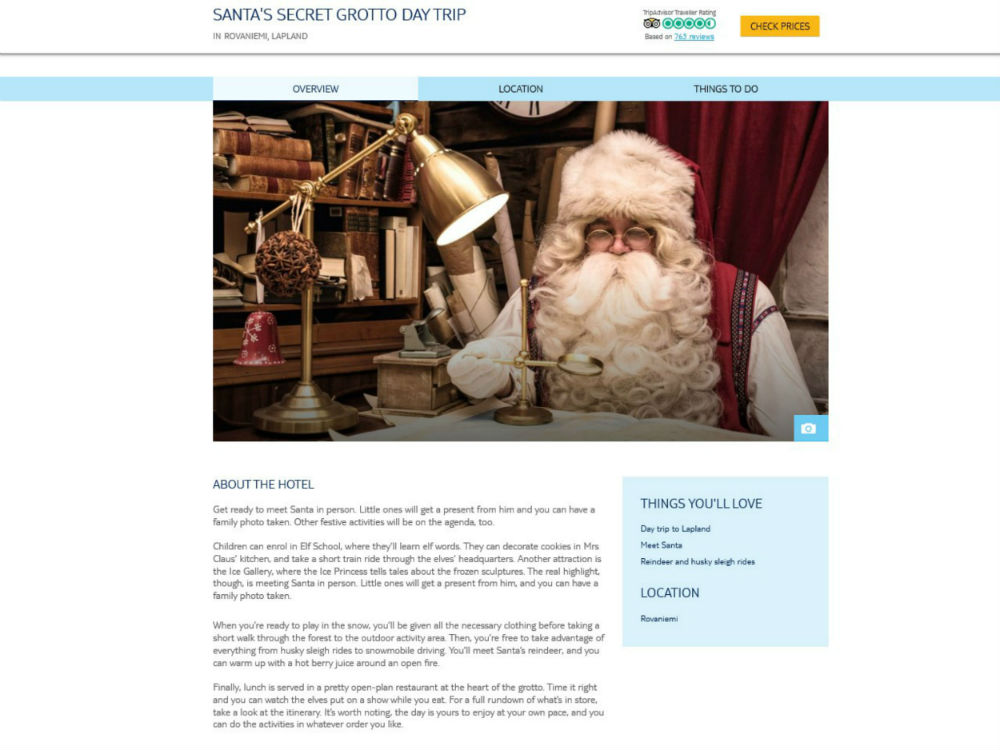 Other families have said they waited hours to meet Santa – only to be told they had to leave the queue in order to make their TUI flight home.

“Santa walked out and only came back because there was an uproar.

“Flights were delayed because people weren’t willing to leave because they’d waited so long to see Santa.

“This trip has been daylight robbery. A formal complaint will be going in once we are home and likely going to be cancelling our summer holiday with TUI.”

He added: “In all honesty I can’t imagine anything will be resolved over Facebook. This is more to get this into the public eye so other people don’t waste their money.

“We have since been informed that yesterday was the first day that TUI had so many flights going into the park.

“Thanks to the greed of your company to try and make an extra bit of money, you have ruined the Christmas’s of hundreds of children who were looking for the magical time that was advertised.

“TUI should be disgusted and ashamed of themselves.”

His wife Jen said: “Absolutely awful day. The sooner this plane takes off and gets me home the better.

“This day trip has absolutely ruined my children’s belief in Santa. My daughter just told me she now knows it isn’t real.

“We paid the best part of 2K for a thirty second husky trip only to stand in a 1.5 hour queue and then have Santa walk out when we were two families from the front. What a shambles.

“From the moment we got in to the resort it was absolute mayhem. I’m so heartbroken, we all are.

“Even the rep told us to complain, and he actually had to shout at santa to tell him to get back in. he just walked out.

“We did nothing that was offered. Gutted. You couldn’t pay me to relive today.

Kathryn Marshall said: “Terrible day in Rovaniemi. Gutted for the kids who didn’t get to see Santa.

“Paid £2000 for a reindeer ride and a husky ride and the snowmobile. In total about 15 minutes of rides.

“Queue was an hour and a half to see Santa which meant we would miss our coach to airport. 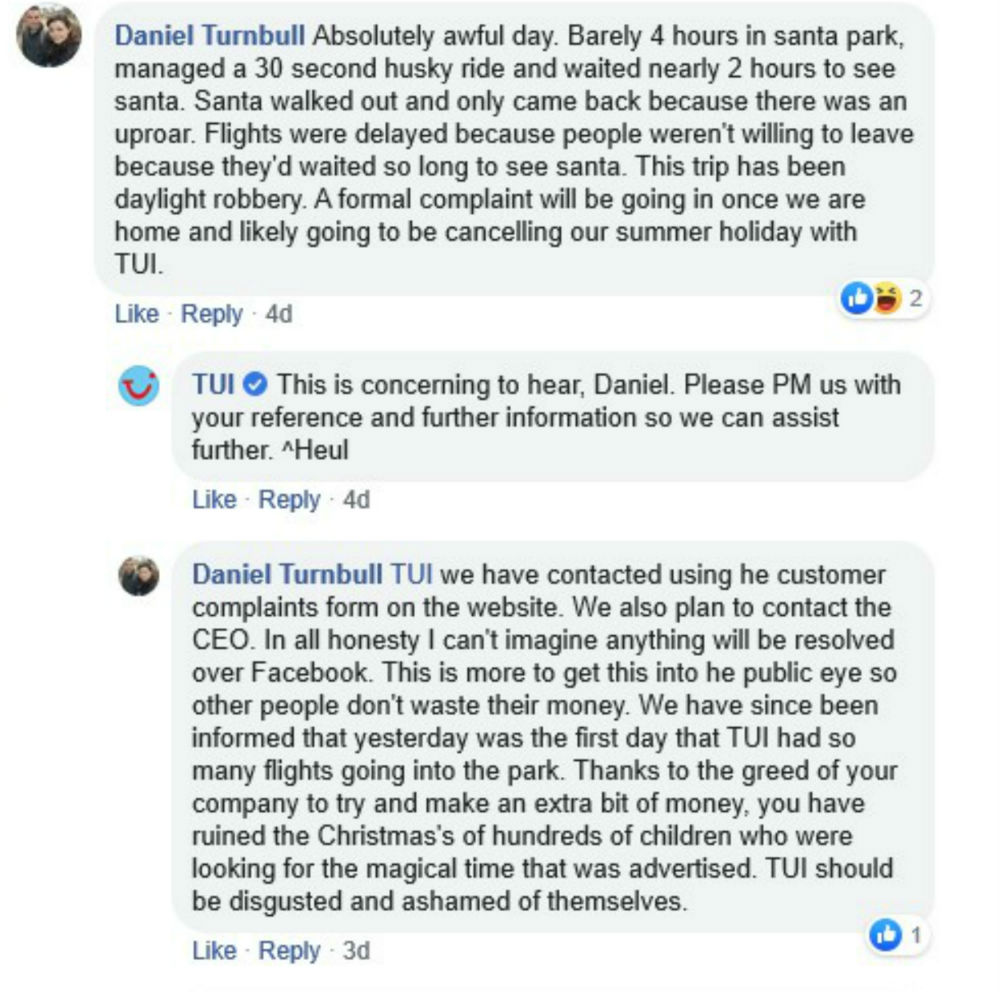 “We were told by TUI rep that our crying children would have to live with it and said it’s something that I’d have to do at home. Absolute joke.

“The itinerary on this trip looked amazing but absolutely impossible to do because it was overbooked the queues were ridiculous for everything.

“Really let down. It’s heartbreaking. It was a nightmare.”

Another parent, Filomena O’Donnell from Crawley, West Sussex said: “Sitting at the airport from a day trip to Lapland absolutely disappointed from the minute the ran out of activity books on the flight over to absolute chaos at the Santa village.

“(We) didn’t get to go to any of the afternoon activities inside as spent over an hour in the queue for Father Christmas, then he just came out handed over presents to kids and was mayhem, after standing in the queue all that time.

“TUI have been a disgrace you took our money and the whole day has bin a shambles. I will be sending a letter of complainant.”

Phil Dowd said: “I had the exact same experience. I’ve already started your complaint process but please can you at the very least sort this out so other families who are booked to travel with you don’t have their Christmas ruined as well?

“This isn’t one or two families who were unlucky. Every person there on the 30th had a similar experience.

“If I personally knew anyone intending to travel with you as a day trip to Lapland i’d advise them to reconsider, or at least contact TUI and check how many flights are going on their day.

“You simply sent about twice as many people as they could cope with on the day.

Jennifer Griffin replied to the post: “Totally agree. My complaint has been submitted. Let’s see what excuses they us.”

The TUI’s website boasts that children will get to meet Santa twice during the “Santa’s Secret Grotto Day Trip” – once shortly after they arrive and again before they leave.

The description of the trip reads: “Get ready to meet Santa in person. Little ones will get a present from him and you can have a family photo taken. Other festive activities will be on the agenda, too.

“They can decorate cookies in Mrs Claus’ kitchen, and take a short train ride through the elves’ headquarters. Another attraction is the Ice Gallery, where the Ice Princess tells tales about the frozen sculptures.

“The real highlight, though, is meeting Santa in person. Little ones will get a present from him, and you can have a family photo taken.”

Children are then able to stroll through the forest and go on a husky sleigh rides as well as go on a snowmobile.

A TUI trip from Bristol airport to Santa’s grotto costs approximately £560 per person for a family of four (two adults, two children) totaling £2237 after a complimentary discount from the firm of £236.

The price includes leaving the UK airport at 6.45am where you would arrive at Rovaniemi airport at 12.15pm.

From there a coach would take visitors to the grotto which is around 5-10 minutes away.

Families then have around four hours at Santa Park before they have to get back on a coach to arrive pack at the airport to check in before their 7pm flight back home.

A TUI spokesperson said: “We’re so sorry some customers weren’t able to visit Santa on their day trip to Lapland last Saturday and we understand this is extremely disappointing and upsetting.

“Unfortunately delays were caused when the park became very busy with other guests.

“We’re working hard with our resort team to prevent this happening again.

“We’re contacting families that we are aware didn’t see Santa to provide compensation and children will be receiving personal letters from Santa.

“We would again like to apologise that we didn’t deliver a magical Christmas on this occasion.”