Homeowner plans to sue builders for £250,000 “after fuse board on five-year-old property caught fire”

A FORMER soldier is threatening to sue house builders for over £250,000 after the fuse board at his five-year-old home caught fire.

Barney Ashworth called in an emergency electrician after he and his family heard crackling noises and the smell of burned plastic.

The former Household Cavalry soldier was told the board had been improperly fitted and that his home in Aylesbury, Bucks, was seconds from burning down.

Now the 37-year-old is planning to sue builders Taylor Wimpey for the £255,000 cost of the property which the family moved in to in 2015, when it was brand new.

Barney, who now works as a musical director in the west end, posted pictures of the damage discovered on November 16 to social media to warn other residents to get their electrics checked.

He wrote: “This is really serious. Last week, our fuse box caught fire. It was crackling and arcing. So luckily the emergency electrician I called out stopped it burning the house down by minutes if not seconds.

“The bus bar wasn’t installed correctly and wasn’t ‘up to torque’ as he put it. Our house shouldn’t have passed NHBC standards.”

Speaking today, Barney, who lives at the address with his wife and daughter, said: “I am absolutely livid. At any point my house could have caught fire and killed my family.

“And if they don’t check every other fuse box in every property that they’ve built then someone is going to be killed and they will not only be to blame but they have been warned about it.

“I want them to pay me back at least the purchase price of the property. I have instructed a law firm to commence legal action on my behalf.”

The electrician called out by Barney, who did not want to be named, said today: “The property’s RCD [safety cut out] unit should not have burned out like that. 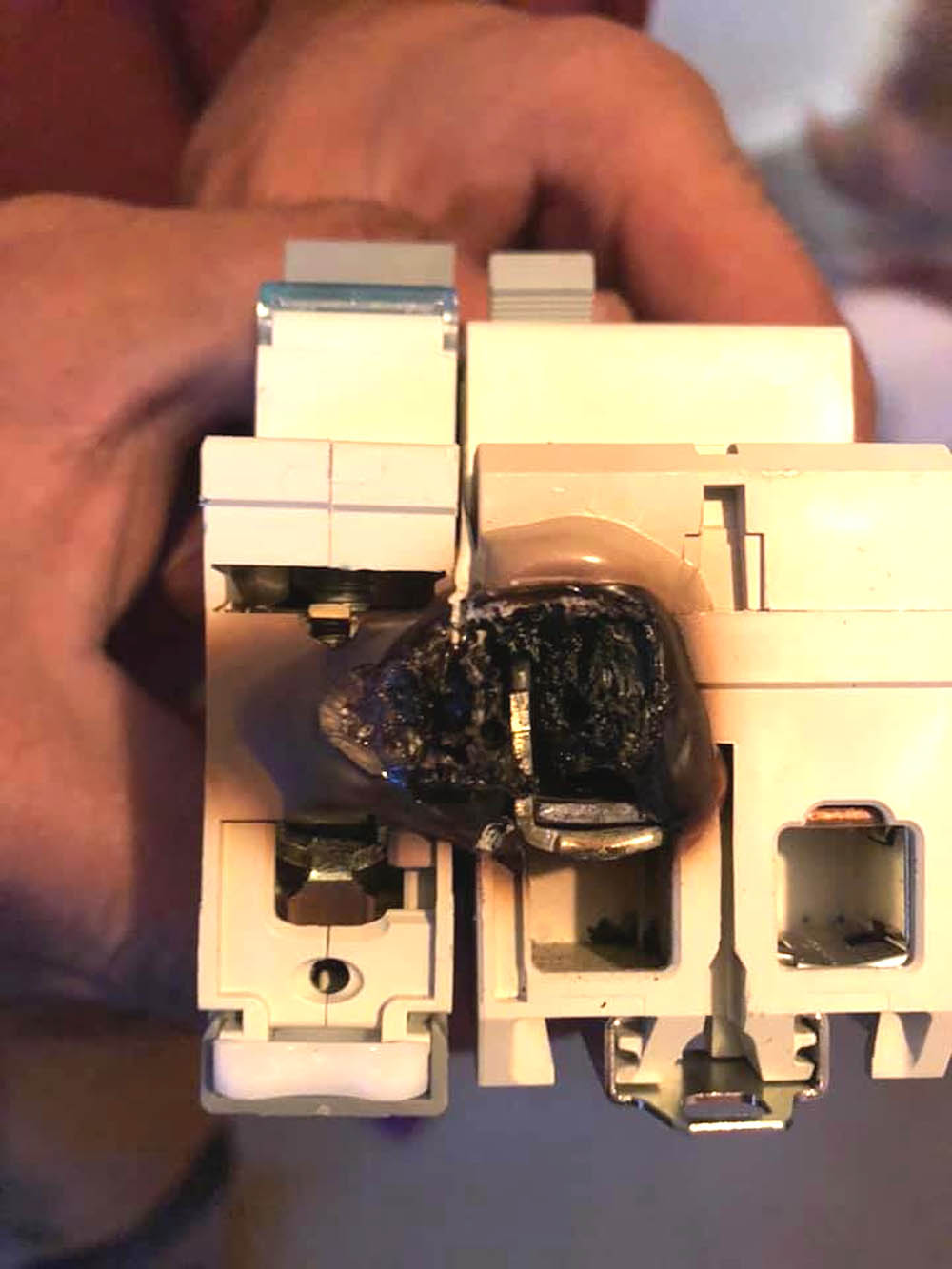 “If it was to happen it would have been in 10 or 12 years. No-one has touched it since it was first installed and it has a ten year warranty.”

The electrician, who works for All Sparks Ltd, added: “It is not the first property we’ve had to deal with this problem. We’ve had three call outs to the same estate as Barney’s in the past month.

“Taylor Wimpey should have checked it. They should at least have an engineer to check their properties every two years.”

A Taylor Wimpey spokeswoman said:  “The safety of our customers and their families is our number one priority and we have treated this matter very seriously.

“Once Mr Ashworth grants us access to his home, the inspection will be carried out, at our cost, and we will offer any further assistance necessary. 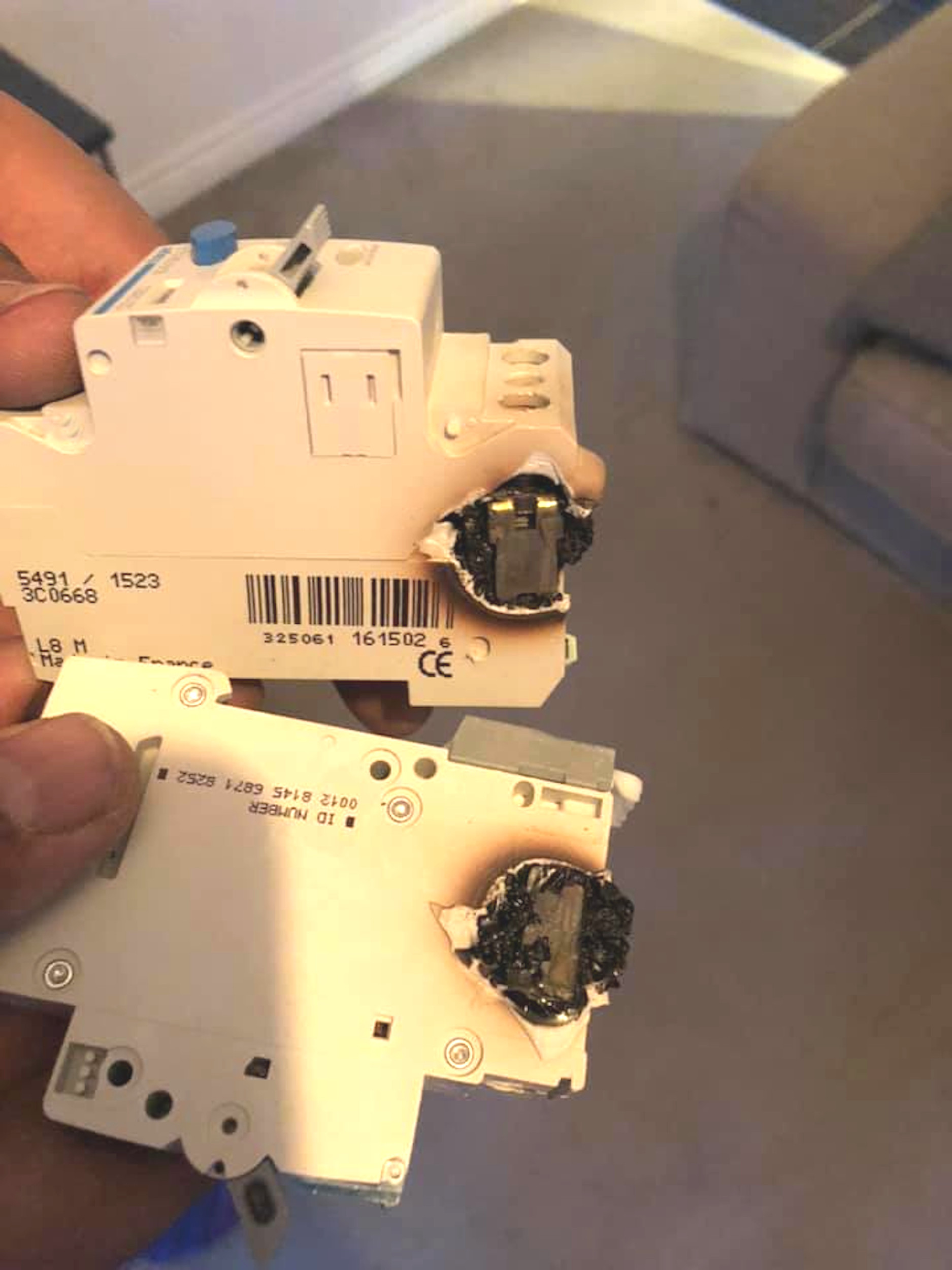 “We also arranged for Hager, along with an independent electrician, to carry out sample checks on a number of electrical consumer units in other homes at Mayberry Place.

“These inspections identified no issues relating to either the electrical installation or the functioning of any of the electrical consumer units that were checked.”

A spokeswoman for Clarkson Evans, who carried out the original electrical work at the property, said: “We’re aware of this incident and we’ve been working with Taylor Wimpey to try to establish the cause and to ensure that no other properties are affected.

“As soon as the incident had been reported, in order to ensure impartiality, Taylor Wimpey contracted an independent electrical contractor to check other properties on the development. No similar issues were found.

“We are confident that the electrical certificate was correctly issued at the time of installation. A consumer unit is not tamper-proof, so we cannot be certain that a third party hasn’t inadvertently changed a connection in the years since we completed the installation.

“The electrician who fitted the unit has been with us for 16 years and we’ve had no issues with the quality of his work. The houses on Mr Ashworth’s estate are now out of warranty, but as a gesture of goodwill, if any homeowners are concerned that they may have a similar issue, we would be happy to return to Aylesbury and carry out a safety check.”