The famous cantilever clock on the corner of Edinburgh’s Princes Street and Hope Street is to be lovingly restored as part of the project to create the Johnnie Walker Princes Street global visitor attraction in the heart of Scotland’s capital.

The clock has been dormant over recent years after being allowed to fall into disrepair, but it will now be brought back to life as part of investment in the Johnnie Walker Princes Street visitor experience.

Expert clockmakers from one of the UK’s leading specialist heritage clock restoration companies, Cumbria Clock Company, have been commissioned to dismantle the timepiece so it can be taken to their workshop and fully restored to its original glory.

Known locally as the “Binns Clock” after the former department store that first installed it in 1960, the clock became renowned as a meeting point for Edinburgh residents, particularly as a romantic rendezvous point for people going on dates. 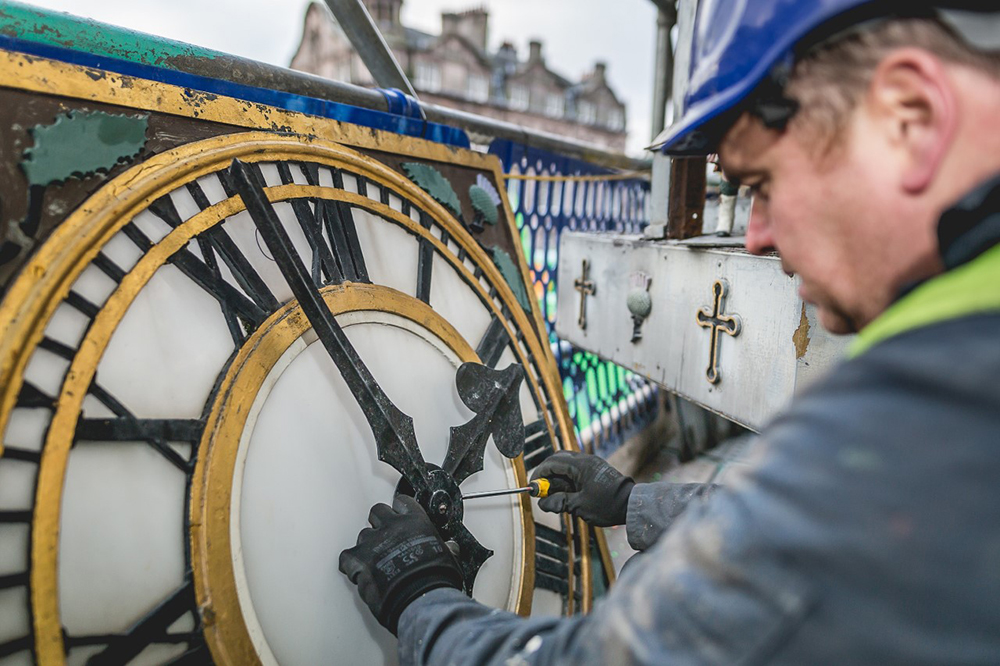 Ewan Andrew, Diageo President of Global Supply and Procurement, said: “We are really excited to be working with the skilled craftspeople from Cumbria Clock Company to carefully restore the clock and bring it back into use. It is such an important part of the cityscape and is so fondly regarded by Edinburgh locals that it will be great to reinstate it as it used to be.

“With the restoration we want the Johnnie Walker Princes Street clock to once more become an iconic meeting place for the people of Edinburgh.”

Mark Crangel, the clockmaker from Cumbria Clock Company who is overseeing the restoration, said: “We repair, maintain and conserve public clocks all over the world, from the largest clocks in the UK to local church clocks – but every clock has its own story.”

The clock had fallen into disrepair over a number of years, including the hand painted highland figures that march out of the clock to mark the hour and half hour falling out of use. The restoration will see the mechanical procession of pipers brought back into use to once again mark the time on the corner of Edinburgh’s most famous thoroughfare.

Work is well underway to meticulously restore the building at 146 Princes Street with many of its beautiful heritage features preserved where possible and integrated into the visitor experience.