The crooks are seen cutting their way in to a secure parking area to get at the wall, which is used by a not-for-profit firm which helps youngsters.

Another video shows the same climbing wall as it is whisked away by the thieves on the motorway.

Paul Oxberry, from Faversham, Kent, was devastated to discover on Saturday that the 23ft-high wall had been stolen.

The 52-year-old, who runs Creed Outdoor Learning, released video of the bizarre theft in a bid to track down the culprits.

He wrote: “It was stolen yesterday afternoon from Bay meadow go kart track in Sittingbourne, Saturday afternoon just after lunch.

“Last seen going towards the A249 round the back of Eurolink estate meta Kemsley Mill being towed by an older white van (transit size).”

The CCTV footage shows the thieves make their way into the go karting centre which Paul uses as a storage facility.

A man exits the white Ford Transit and lifts a vehicle barrier.

He then returns to the van, retrieves what appears to be bolt cutters, and then cuts the lock on the entrance to the centre.

He can be seen breaking the lock on the gates of the centre and then continues on through, raising another vehicle barrier in the process.

As a result of the publicity, Paul was contacted by a motorist who captured video of the wall being driven away 40 minutes after the theft. 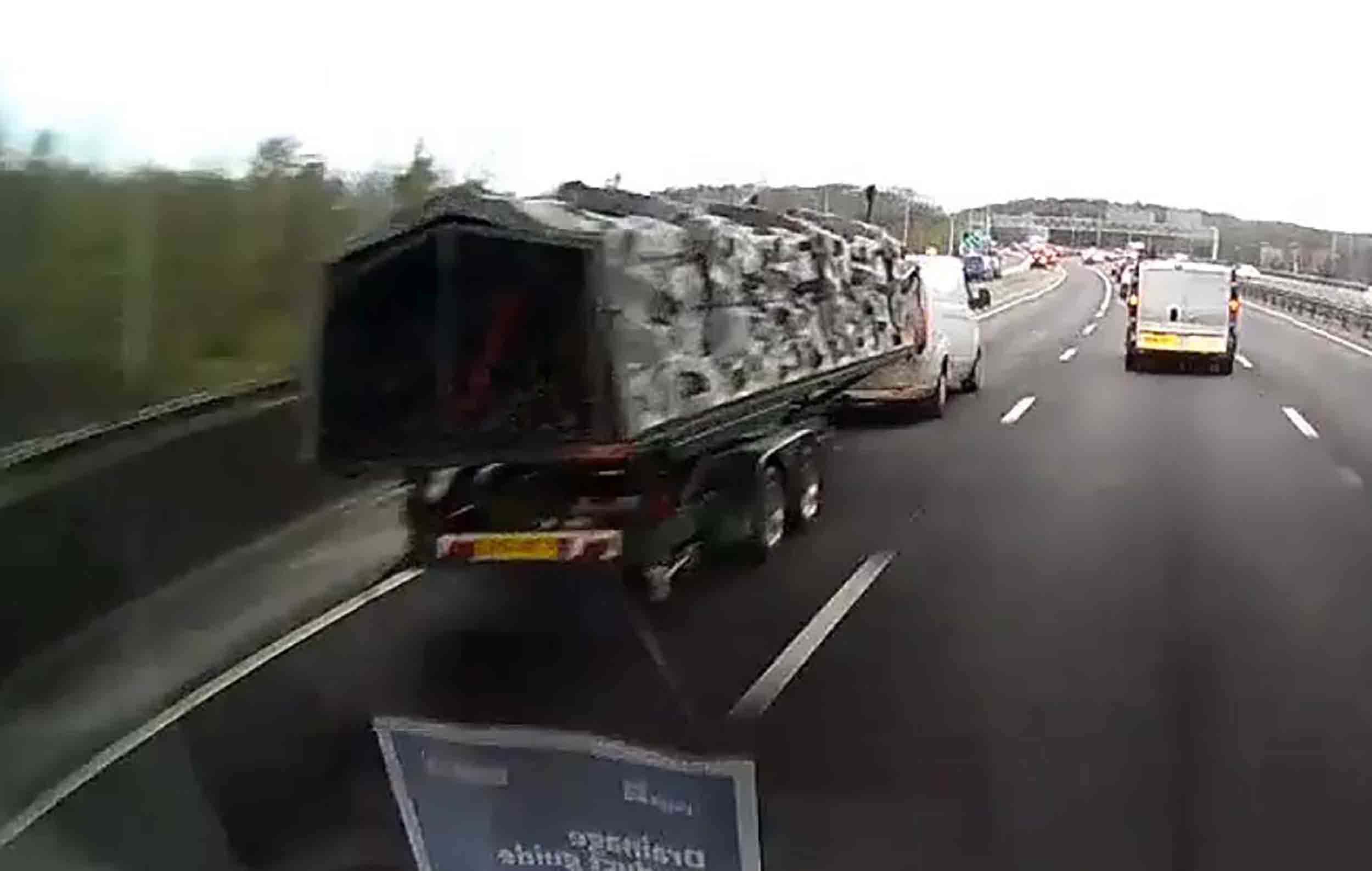 The van can be seen travelling along the A2 in Darenth, Kent, 30 miles away from Sittingbourne.

Facebook users have expressed their best wishes for Paul in hoping that he will be reunited with the climbing wall and also wondering what anyone would want with a climbing wall.

Steph Watson said: “Paul…I am sorry to hear this and fingers crossed you get it back. Your luck can only get better….onwards and upwards now.”

Steve Ware commented: “Hope you get it back there’s some scummy people about.”

Norman Jones posted: “What the hell is someone going to do with that?”

Linda Collingwood said: “Wtf who would want to pinch that, the mind boggles.”

Speaking today Paul said: “I am totally gutted but the reaction of people wanting to help is amazing. 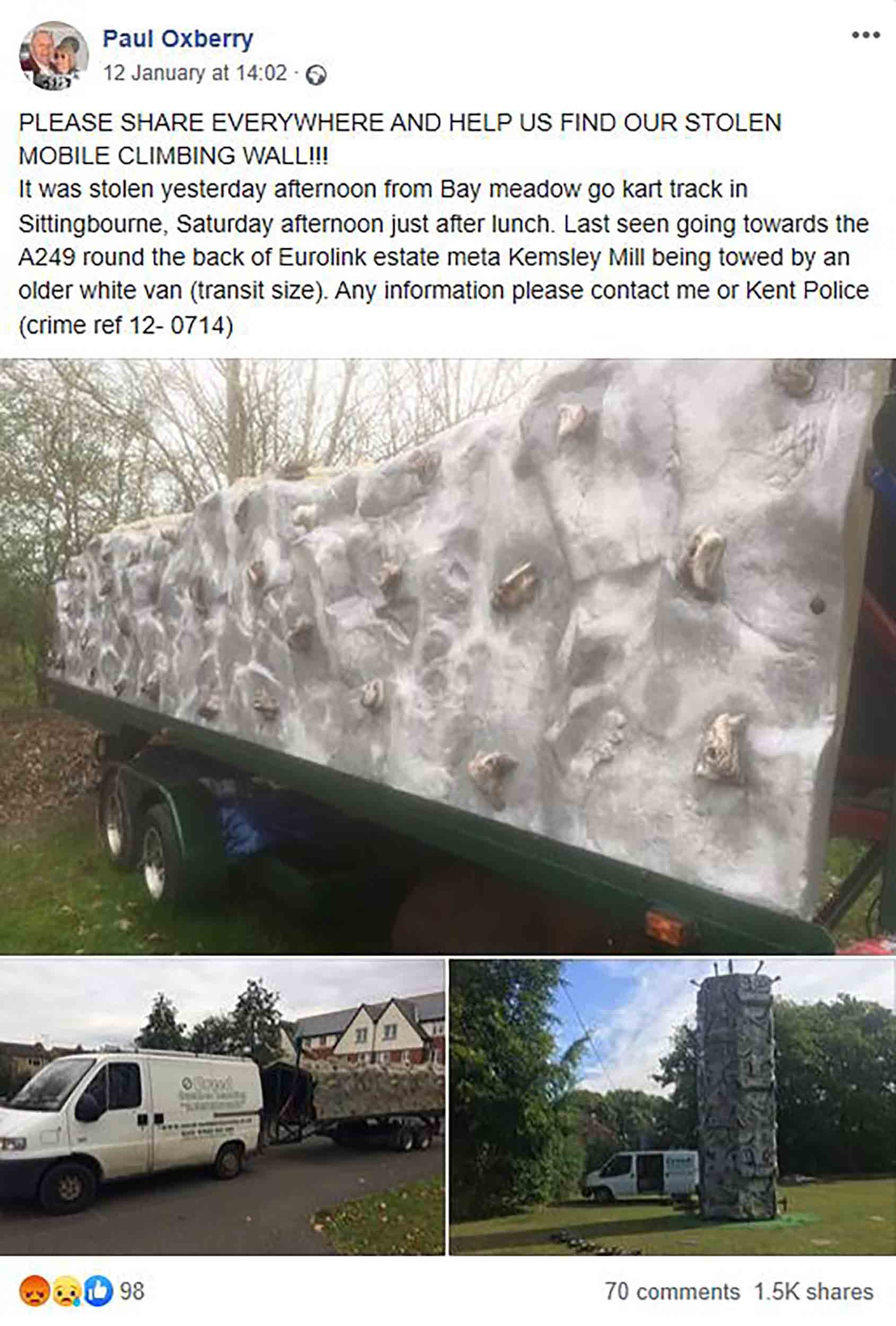 “Thankfully, I have a list of 20+ things on the wall that make it unique to us and identifiable. So if we find it I can identify it.

“Creed Outdoor Learning is a ‘not for profit’ company that works with young people, many of our school customers are from quite deprived areas of Kent.

“I have been a youth worker and outdoor instructor for more than 20 years, whilst it is my company our main income is in the summer so sometimes in the winter I freelance or take on a part time job to pay the bills.

“Here’s hoping we get it back in one piece.”

A spokeswoman for Kent Police today said: “Kent Police was called at 1.45pm on 12 January 2020 to reports of a rock climbing wall being stolen from Bonham Drive, Sittingbourne.

“Initial lines of enquiry are underway and officers are appealing for anyone who may have seen the climbing wall being stolen or towed by a vehicle to contact Kent Police.”