Following a severe rugby injury, Dani Watts, 31 and fulltime wheelchair user, has regained the ability to independently support her family thanks to a new generation of homelift.

Dani from Wokingham, Berkshire, took up rugby at the age of 25 and instantly fell in love with the sport.

Two years later during a match for Reading-based club Rams RFC, Dani’s back was broken during a tackle which left her with a T10 spinal injury. Dani, who has two children, Lillie-Rose (nine) and Freddie (seven) spent six months in hospital and now uses a manual wheelchair. 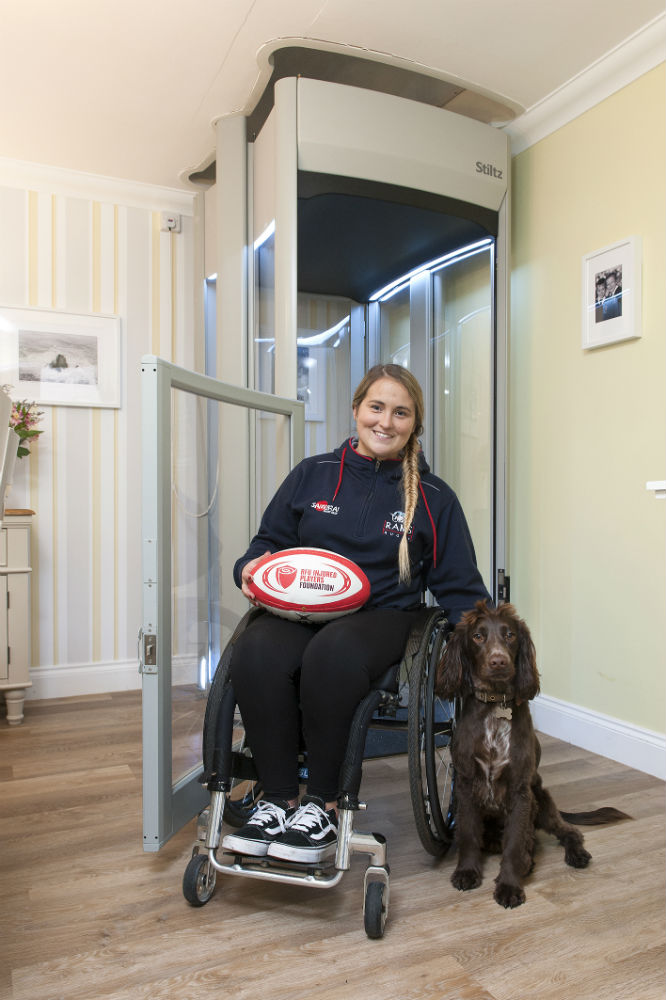 Dani suffers with severe nerve pain but has worked extremely hard to get her life back on track.

Dani said: “It has been a very difficult time and I just want the ability to carry out ‘normal’ everyday tasks for my family and to get back to work.

“I have never known life any other way and I’ve always had a busy work life. Before retraining to becoming a personal trainer (PT), I was a police officer. I have two young children to look after and life is pretty hectic!”

The RFU Injured Players Foundation has played a huge part in Dani’s life since her injury.

They donated £246,000 towards her new accessible home, she also received additional £140K from Rams RFU and £100K from a kind-hearted PT client. “You don’t know what charity is until you are on the receiving end.

“It was the most amazing example of humanity I have ever seen; people do actually care”.

With the financial support received, Dani and her family were able to buy their own home and convert it, so it was fully wheelchair accessible.

The Stiltz Homelift was installed in the dining room and goes directly to the bedroom. “For nine months my partner Pete had to give me a piggyback upstairs! Not only is this bad for his health, but it’s extremely undignified for me.

“I don’t know what I would do without the Stiltz Homelift. Independence is such a fundamental need, no one should feel like a burden to anyone else”.

Dani continues, “I can go to bed when I like, have a bath when I like…my independence is my life and that’s what my Stiltz Homelift has given me. Also, we have talked about having another baby, so a homelift would be essential for me to safely move between floors”.

It has taken two years, but Dani is getting her career as a PT back on track. She has several clients and is about to start working with Rams RFU providing group strengthening classes which can help players avoid injury. She is heavily involved with the club and attends every home game.

Dani concludes: “Pete plays for the men’s team and both of my children joined the Junior Rams, even after my injury. At first my daughter was nervous, but sport is such a huge part of our lives, and now they love it as much as I do, which is something I am hugely proud of.

“My plan is to show my children what is possible when you have independence and determination”.

To thank the RFU IPF for all their support, Dani is aiming to raise £10,000 in the 2020 London Marathon where both her and partner Pete will compete in a wheelchair.