A LOLLIPOP man has been banned from high-fiving schoolchildren following a complaint about his “behaviour”.

Former farmer Jim Hewitson, has helped kids cross the road in rain, wind and snow for the past decade.

And many of the youngsters at Galston Primary, East Ayrshire, have happily given the 59-year-old father of two a high five when crossing.

But many parents are enraged after getting any official message telling them to order their children to stop the practice.

The school messaged on January 13: “Could all parents please ask their children to stop giving Jim the crossing patroller or his road crossing sign a high five when he takes them across the road.

“A complaint has been made to the council about this behaviour and Jim has asked us to make parents aware of this to avoid any further complaints.

“Thanks for your support in this matter”.

Gail Mcfarlane was among hundreds of parents to take to social media to complain, writing: “Poor Jim is going to be so disheartened by this. Everything he does is for the kids.

“He’s a kind caring man with not a bad bone in his body. What has this world came too that he can’t even high five kids which gives them joy? So sad.

“This will hit Jim hard as he can’t do anything right just now. All he wants to do is make the kids happy and help out.”

Janette Crawford said: “This cannot be serious. What in the world is happening to this society?

“What a sad,sad day for all concerned.

“As for the complainant. Well that/those persons need to be told two very short words.

“The poor guy is there to get the kids safely across the road. Much nicer to have a good rapport with the kids and for the kids to show some appreciation.”

Gillian Mallon wrote: “Only someone with a deviant mind would think it inappropriate for an adult to high five a child.

“This is a fantastic and safe way for the different ages to connect. Very sad indeed.”

Hazel McSorley said: “What’s even worse is that the school has put out that announcement.

“We are now a society where we jump when a complaint is made.

“Previous years the headmistress/headmaster would have laughed at the complaint and said don’t be daft.”

Outside the school yesterday (tue) there was clear evidence of some children ignoring the ban.

Watching the scene was pub landlord, Simon Cole, 39, who said: “This man is a pillar of the community, everyone loves him.

“It is absolute nonsense, the kids love him and the adults love him also. He is always invited to any school events, a total man of honour.

“It is absolutely mental.

“The person who made the complaint should be ashamed of themselves, everyone in this town stands behind him, and I mean everyone.

“There’s a lot more stuff to be worried about than people high fiving a lollipop man.” 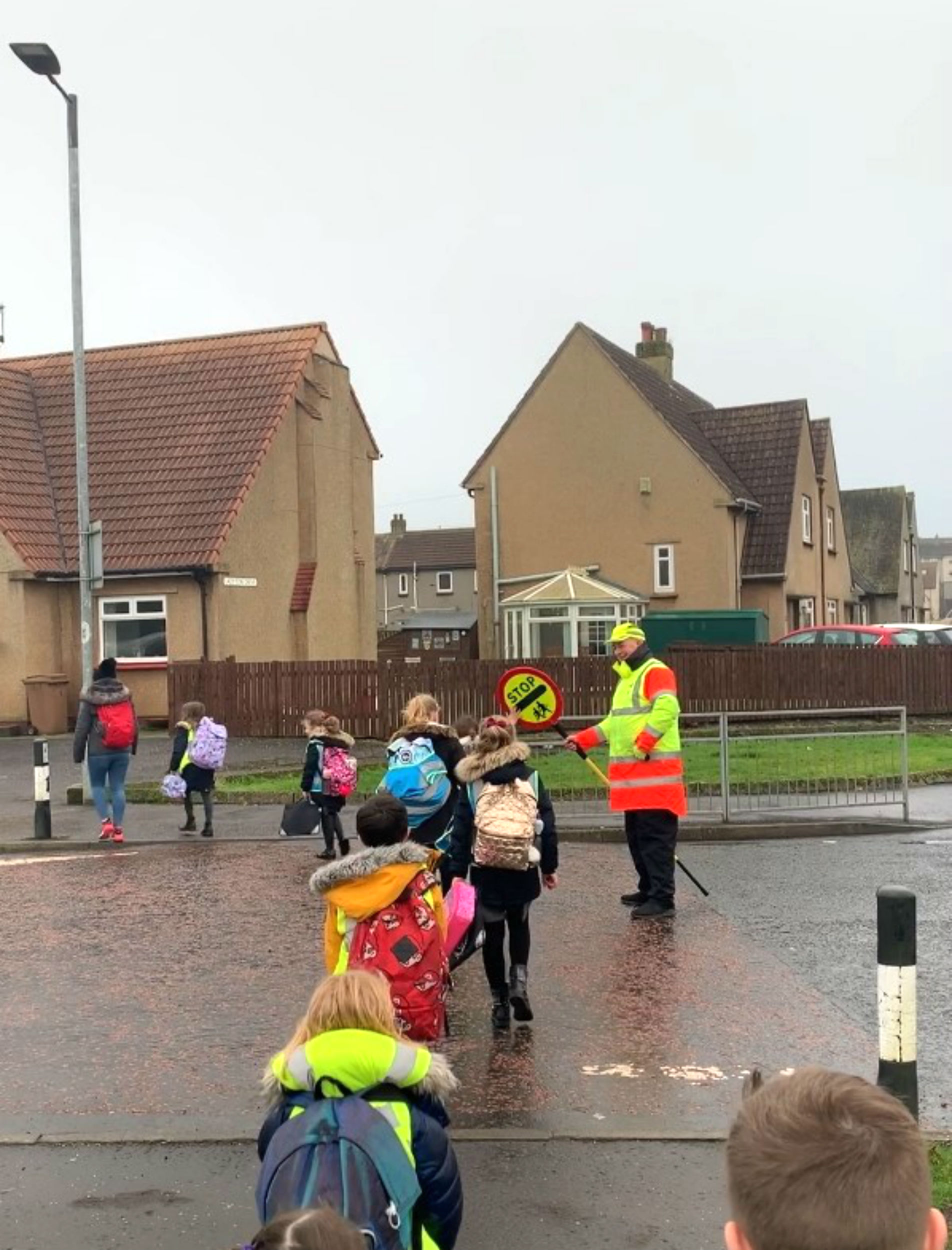 Tesco worker, Stephanie Johnston, 31, said: “Jim doesn’t have a bad bone in his body. I am totally shocked.

“He says hello, he waves to everyone that goes by.

“All the kids love him, he is so well loved around here.  I couldn’t believe it.”

Speaking about the decision, Jim said yesterday (tue): “I was told that I could get sacked on the spot, however my boss came out after the complaint was made and told me directly that I wouldn’t lose my job which was a relief.

“I felt upset about it, I was questioning everything I was doing.”

He added; “I love this job, I love interacting with the kids. I just love it.

“One of the Mums has told me that seeing me in the morning makes her day.”

This is not the first time a school crossing patroller has been ordered to stop high fiving kids.

In 2018, a ban stopping an 85-year-old lollipop man from high fiving school children in Heaviley, Stockport, was lifted in a council U-turn.

Stockport Council were forced to apologise and lift the ban following a backlash from furious parents.

The council said they were “clearly wrong” to impose the ban ordering Colin to stop high-fives and “concentrate on ensuring highway safety”.

East Ayrshire Council today distanced themselves from the message sent by the school.

Spokesman Andrew Kennedy admitted: “Information was issued via the school app that has caused concern.”

He added: “I would clarify that the crossing patroller was not officially instructed to stop the young people high fiving him.

“When this issue was further raised with the council, the service manager assured the crossing patroller that he has our full support for the excellent work that he has carried out over the last ten years.

“While he is there to support children crossing safely his positive attitude and engaging approach with the young people is encouraged.”