However, he is adamant the blame does not belong at the door of head coach Daniel Stendel.

Halkett maintains that Stendel’s tactical philosophies and instructions have been crystal clear, despite suggestions this week that the German was struggling to communicate his ideas. 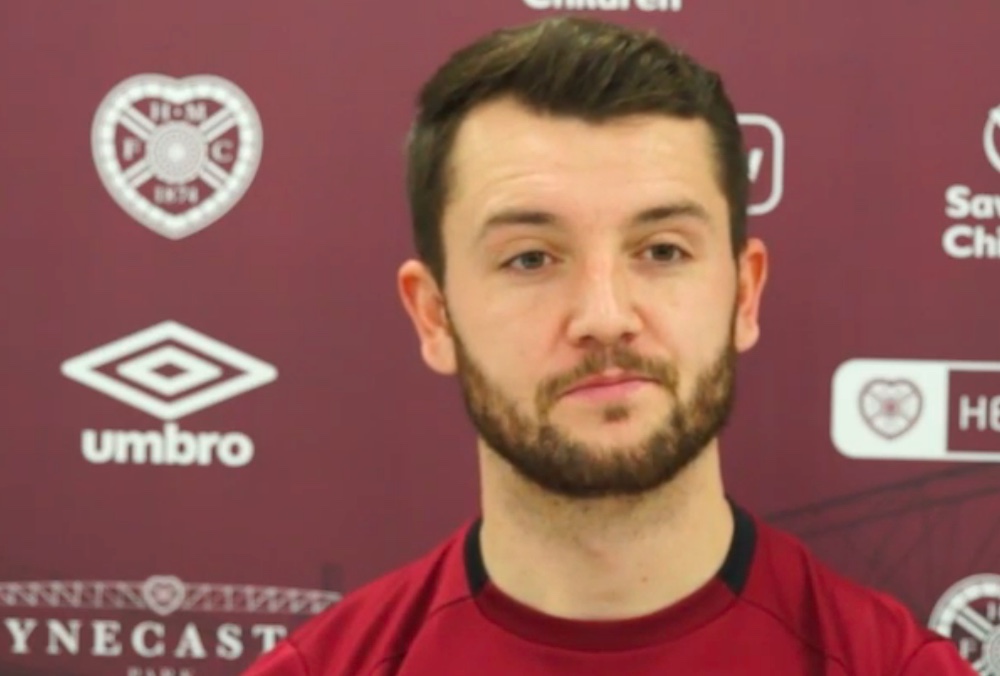 That came in the aftermath of a mistake-strewn 2-2 draw against Hamilton on Saturday which saw them remain one point behind Accies at the foot of the table.

Halkett has joined Steven Naismith and Toby Sibbick in refuting those claims but is acutely aware that Hearts must start doing their talking on the pitch.

“The manager’s English is fine and I’ve taken on board everything he wants me to do,” said the former Livingston captain. “I understand what he wants; all the players do.

“We all know how he wants to play football and we work on that. The boys all enjoy training every day and have taken on board the things he is telling us. There have been no problems on that front.

“Going back to the Rangers win [2-1], that was a really good performance and most of things we spoke about and worked on came off. Everything worked perfectly

“There have been glimpses in games that we can play that way but we need to cut out the lapses.

“It’s just been a lack of concentration or an individual error.

“With the first Hamilton goal on Saturday, it was that bit of luck – the striker [Marios Ogkmpoe] was down tying his lace. If he’s not doing that, maybe he isn’t in that position to score the goal.

“Small things like this that are going against us at the moment.”

Even with the full support of the dressing room, a record of one win in 11 league matches makes grim reading for Stendel, even if that sole triumph was a stirring one against Rangers.

Defeat in Paisley on Friday night would leave the Jambos six points adrift of 10th place and guaranteed survival.

At that point, serious questions are bound be asked regarding the former Barnsley and Hannover boss’s ability to salvage this train-wreck of a campaign.

Stendel pulled no punches in his assessment of the situation on Thursday, insisting some players needed a ‘reality check’ and to stop assuming that they would inevitably escape the drop-zone.

The message was received loud and clear.

“Is this my biggest game as a Hearts player? I think so, considering where we’re sitting in the league and everything else,” acknowledged Halkett. “We’ve been waiting for that one result to kick us on and we all hope it’s going to be this one.

“Everyone within the club and the dressing room knows how big it is.”

Halkett added: “When I signed I didn’t expect to be in this situation but we’re in it and it’s up to ourselves to get out of it.”

Finding a way not to concede to the opening goal would certainly aid Hearts’ bid to claim a precious three points.

A noticeable pattern has seen the Jambos fall behind in nine of Hearts’ Premiership games under Stendel and the consequential need to chase their tails has only exacerbated the feeling that life under the new gaffer is rather manic and gung-ho.

A controlled, confident display could be just the ticket to re-ignite their season.

“We’ve been conceding early goals and that’s been our downfall in the last few weeks,” added Halkett. “We’re giving ourselves a mountain to climb so if we get that early goal then it can maybe it will change our luck a bit.”

Indeed, Halkett has often been Hearts’ Plan B, thrown up front in the dying embers in a bid to rescue a result. His last-gasp leveller against Accies at the weekend was his seventh goal of the season.

Halkett is the club’s top-scorer; an admirable accolade for him but an indictment of Hearts’ attacking play for much of the campaign.

“It would be nice to be winning the game and I could just do my job as a defender,” smiled Halkett, somewhat ruefully. “However, if I’m asked to go up front to try to get a goal then I’m more than happy to do so.”

While Hearts are short of form and confidence, St Mirren may just be running low on stamina, such was their exertion in Tuesday evening’s breathless 4-4 draw against Motherwell in the Scottish Cup.

The Buddies emerged victorious on penalties, but Halkett reckons legs may still be heavy after a gruelling 120 minutes.

He added: “It was a hard shift for them, so to go again and play on a Friday is a tough ask. We’ve had an extra few days recovery so it can only work in our favour.”