The University of St Andrews’ new Wardlaw Museum will officially open on Saturday 4 April 2020, inaugurating its new exhibitions programme with ‘Philip Colbert: The Death of Marat & The Birth of The Lobster’.

Scottish artist, and St Andrews alumnus, Colbert will bring his hyper-pop universe to Scotland’s oldest University, with a giant inflatable lobster in St Salvator’s Quadrangle; three lobster statues around the library; and a reinterpretation of Jacques-Louis David’s masterpiece ‘The Death of Marat’ as the centerpiece to his headline exhibition.

The exhibition explores Colbert’s world, his creativity, and his journey as an artist. It was as a philosophy student at the University of St Andrews that Colbert first became interested in thinking about perception and reality. This interest has informed his view of art history, the dialogue between the past and the present, and how education and learning can push realities and possibilities.

Philip Colbert said:
“I love the idea of returning to my alma mater St Andrews and bringing my hyper-colourful pop world into this historic town. I think it will create an interesting dynamic between old and new, and my past and future. 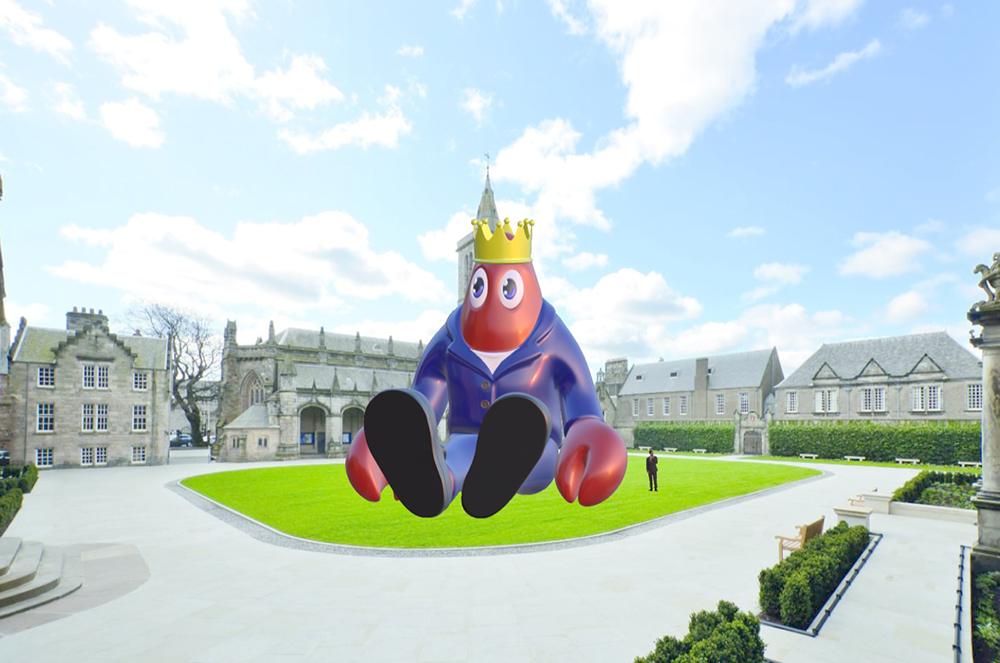 “I felt there would be no better symbol of coming back than placing my giant inflatable lobster in the historic St Salvator’s Quadrangle.”

The theme of the show will celebrate the amazing historical connection St Andrews has with art history through the infamous Jean Paul Marat and Jacques Louis David’s masterpiece ‘The Death of Marat’, which is arguably one of the most iconic paintings in history.

Like Philip Colbert, Jean-Paul Marat was a St Andrews graduate. Marat received a medical degree from St Andrews in 1775. When the French Revolution began in 1789, he led the Jacobins, who fought against the monarchy and wanted a republic.

He died in 1793, when Charlotte Corday, who blamed him for the execution of thousands of people, murdered him in his bath. Jacques-Louis David immortalised Marat’s final moments in his painting. Nearly 230 years later, Colbert’s exhibition explores and reinterprets this dramatic event.

His works, which combine pop art, virtual reality and fashion, have attracted the attention of singers Lady Gaga and Rita Ora, as well as fashion legend Andre Leon Talley who has described him as “the godson of Andy Warhol”.

Dr Catherine Eagleton, Director of Museums at the University, said:
“We are excited about this exhibition, which places neo-pop surrealism at the heart of Scotland’s first University. For us, this is more than an exhibition, it is also a statement of intent that the new Wardlaw Museum will be inspired by the 600-year history of Scotland’s first university, but also surprising, creative and playful, challenging us all to see what the University does in new ways.”

The exhibition will run at the Wardlaw Museum from Saturday 4 April to Sunday 17 May 2020. Entry is free and open to all.