TALENTED parents have revealed how they created the ultimate “gamer pod” for their 10-year-old son.

Amy Baker, 34, and Luke Burrows, 41, told how they spent just £150 transforming a bedroom for Luke’s son, Jay, at their home in Birmingham.

The couple say they managed to produce the “dream bed” for ten times less than if they’d had it made to order.

The couple have used yellow and black hazard tape and warning signs to give it Jake’s desired “gamer” feel.

Luke’s “pod” has sliding doors which reveal a mattress, TV, playstation and a fake CCTV camera.

The clever design has ventilation underneath the mattress so Jay can sleep with the doors closed if he likes.

Luke, a carpenter, spent four days and £150 creating the bespoke space for Jay, saving around £1350 by doing it himself. 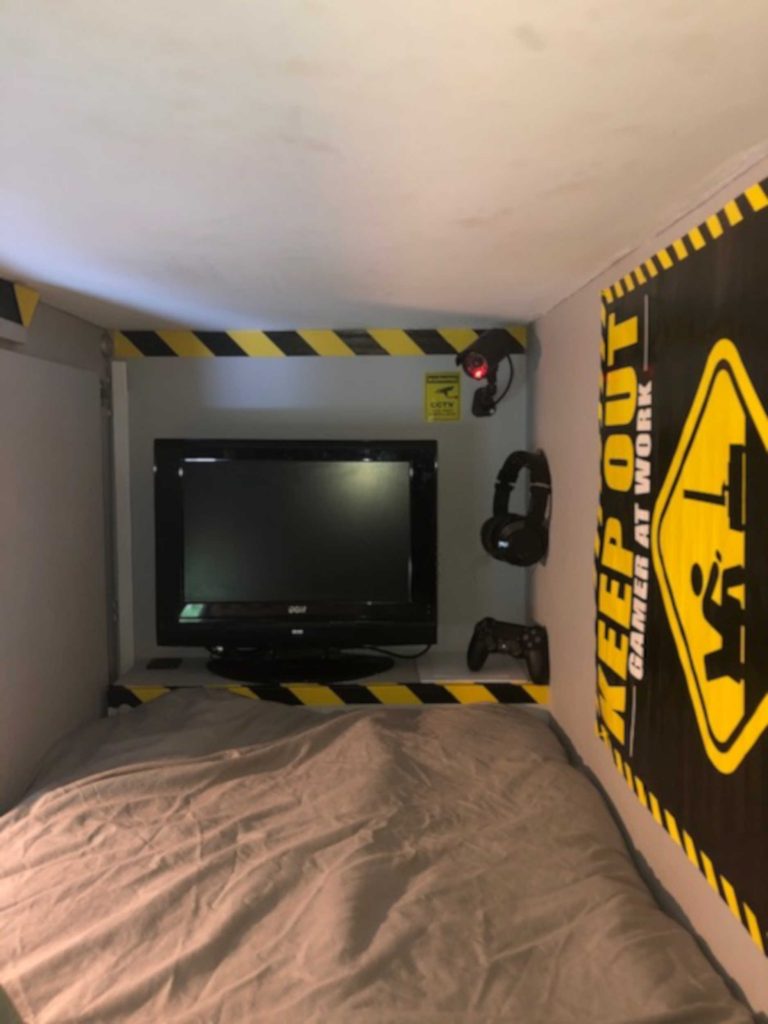 When he was finished, Amy took to social media to share his creation.

She posted snaps of the pod with the caption: “Well, with some very late nights painting and scouring the internet for the right finishing touches.

“His Dad built this. His face was an absolute picture and I can honestly say I’ve never been prouder to be a step-mum.

“Introducing the GamePod 3000. The doors slide open to reveal his mattress and there’s a TV and PlayStation on the wall inside.

“Three double wardrobes underneath and moveable stairs to free up more floor space if he wants it.”

User wrote under Amy’s post saying: “Looks amazing, can you do a video so we can see inside please.”

One wrote: “I have never seen anything like that before!! Wow. How amazing they have somewhere so special to stay when they are with you! That’s how it should be

Another said: “Holy crap! This is amazing! And how amazing of you to make his little dreams come true.”

Speaking today Amy said: “Jay was adamant that he wanted a gamer/space station/security style bed – his Dad who is also an avid gamer jumped all over that idea and the GamePod 3000 became a reality.

“Putting Jay’s bed above the wardrobes meant all the large furniture was taken care of on one side of the room. The rest of the floor space was his to fill with footballs, bean bags and dirty socks.

“Luke is so bloody talented and good at what he does. It’s been really important for us both that the children know this is their home.”