ANN BUDGE is adamant she will be left with ‘no choice’ but to take legal action if Hearts are condemned to spending next season in the Championship.

The Tynecastle chief executive has submitted reconstruction proposals to all of the other 41 SPFL clubs and is awaiting divisional discussions on the plans, which are due in the coming days, before a possible vote on the mooted 14-14-14 restructure.

The capital businesswoman has confessed to having already received negative feedback from clubs claiming to have been ‘forgotten about’ in her suggested revamp. 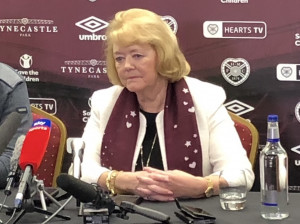 She is insistent her paper was always only intended to spark further debate on how next term could work for clubs in the face of the coronavirus crisis.

But she has revealed adherence to the status quo would not be acceptable to the Gorgie outfit, who were relegated with eight games still to play and are now preparing for a court battle to stay in the top-flight.

“What I had basically said is that the Premiership should be expanded to 14 teams,” she said, “and the teams below can discuss what structure should be below, based on their needs rather than someone else coming in and saying it should be this or that.

“But they have to have that discussion. I just had to get something down to get that debate going.

“But now we need to know that, so we can move on and try to finalise this because this is not easy for any of us and we all need to make plans.

“The reason we are in this mess, or it is as bad as it is, is the unfairness of what happened in April [the passing of the SPFL resolution].

“I don’t think they will take a vote next week but we will get a clear indication of what we have to address. But it could drift and drift and drift, and I for one don’t want that any more than anyone else.

“I am desperate for a decision here – as if there weren’t enough uncertainties about.

“Some people will say ‘just give up then’ but that takes us full circle to me saying ‘I’m not giving up because this is wrong’.

“If it, unfortunately, becomes clear that we will be starting the season in the Championship I don’t have any choice but to go ahead with a legal battle.

She added: “We have already got two QCs who have looked over the original decision and that is just one angle.

“Do I want to do that [a legal challenge]? Absolutely not.

“We could have done it straight away but I didn’t do it because it wasn’t the right thing to do without exploring other options.

“But other clubs have admitted that we should be given financial compensation, but who benefits out of that? If it is the clubs compensating us then they are basically admitting that something wasn’t fair.”