SUFFOLK Police have apologised to a couple who were stopped by officers for “driving a motor vehicle on the road.”

One of the officers involved in the stop accused the couple of “jumping on a bandwagon” when they questioned their decision to stop them.

The couple’s daughter, Maja Antoine-Onikoyi says her parents had just taken her mum’s car for a service when they were stopped.

A neighbour apparently reported them for paying “special attention” to their house.

As the clip begins, the couple are seen arguing with two police officers.

The male officer says: “At the end of the day, whether it looks funny or not, you were driving with a motor vehicle on a road, then you’ve parked up.”

“So therefore I’m requiring you to provide proof of driver..”

He is then cut off by the woman filming who exclaims: “You are kidding us right now. You can see why people get upset, you can see why you p*** them off.”

The officer asks them to provide proof they live nearby, however, the couple say they are staying with the man’s mum and therefore the vehicle documents will not be registered to the address.

The female officer then says “What you’ve done is just turn something..”

The woman cuts her off, pointing out that the police approached them first.

The female officer continues saying: “When you start getting irate, you’ve turned it into something it shouldn’t be. You’ve just jumped on a bandwagon, and that’s not okay.”

The police say that they were alerted to the couple by a resident on the street.

However, the couple explain all they did was reverse their car. 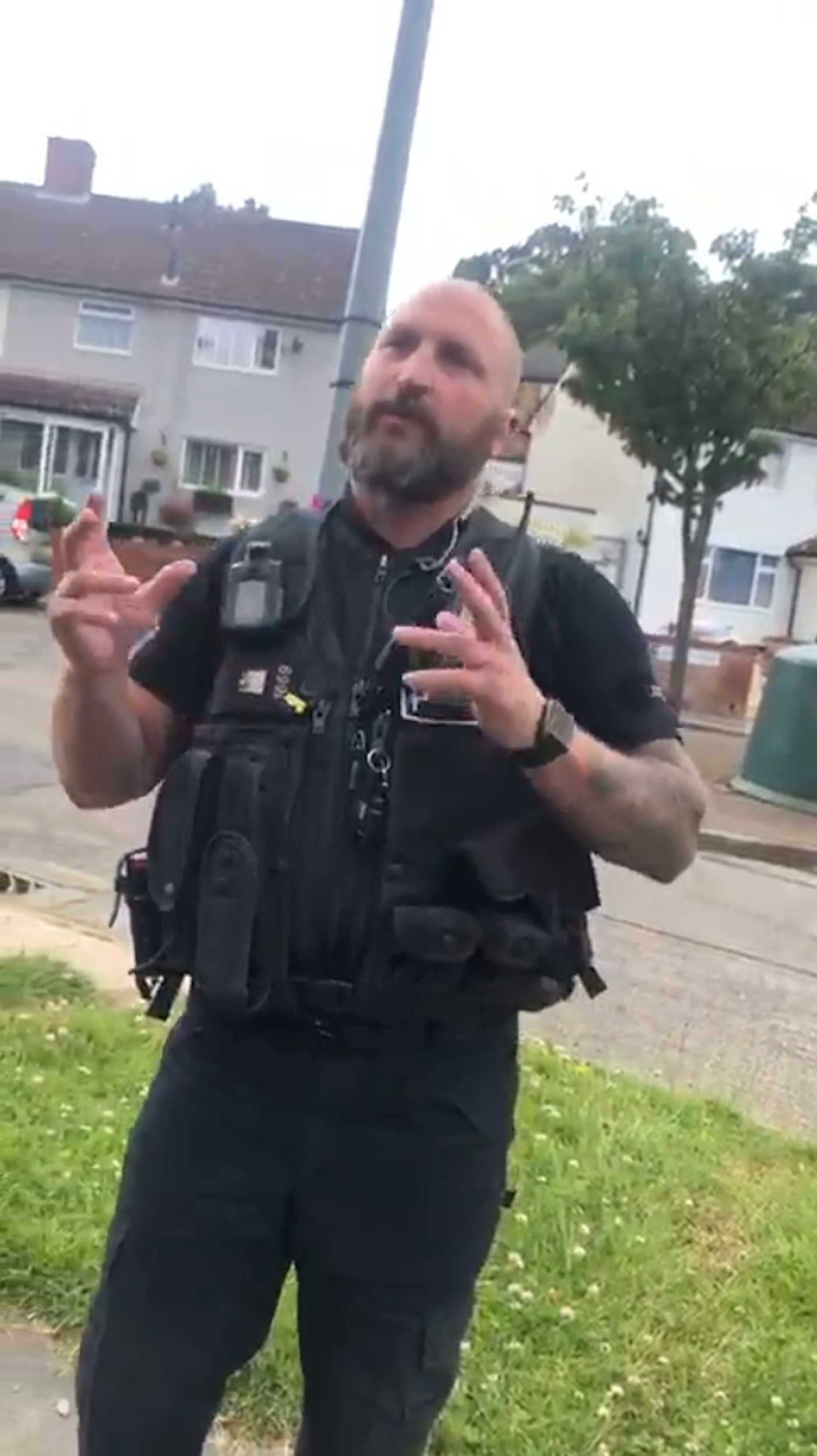 The woman asks: “What did he tell you we burgled a shop? Do we look suspicious?”

The officers then deny that they said the couple look suspicious.

The male officer says: “We stopped you to make enquiries, to make sure there is no connection. They have said you paid them attention.”

To which the woman retorts: “Oh my god so we can’t look at you driving past? It’s for looking at the police.”

As the argument continues, the female officer is seen laughing and shaking her head.

As the clip ends, the male officer finally apologises saying: “I can only apologise for how this looks.”

The footage was shared shortly after the incident by the couple’s daughter Antoine, captioned: “Yesterday, my parents were stopped and questioned in their own driveway for ‘driving a motor vehicle on the road’, and ‘because they can’. 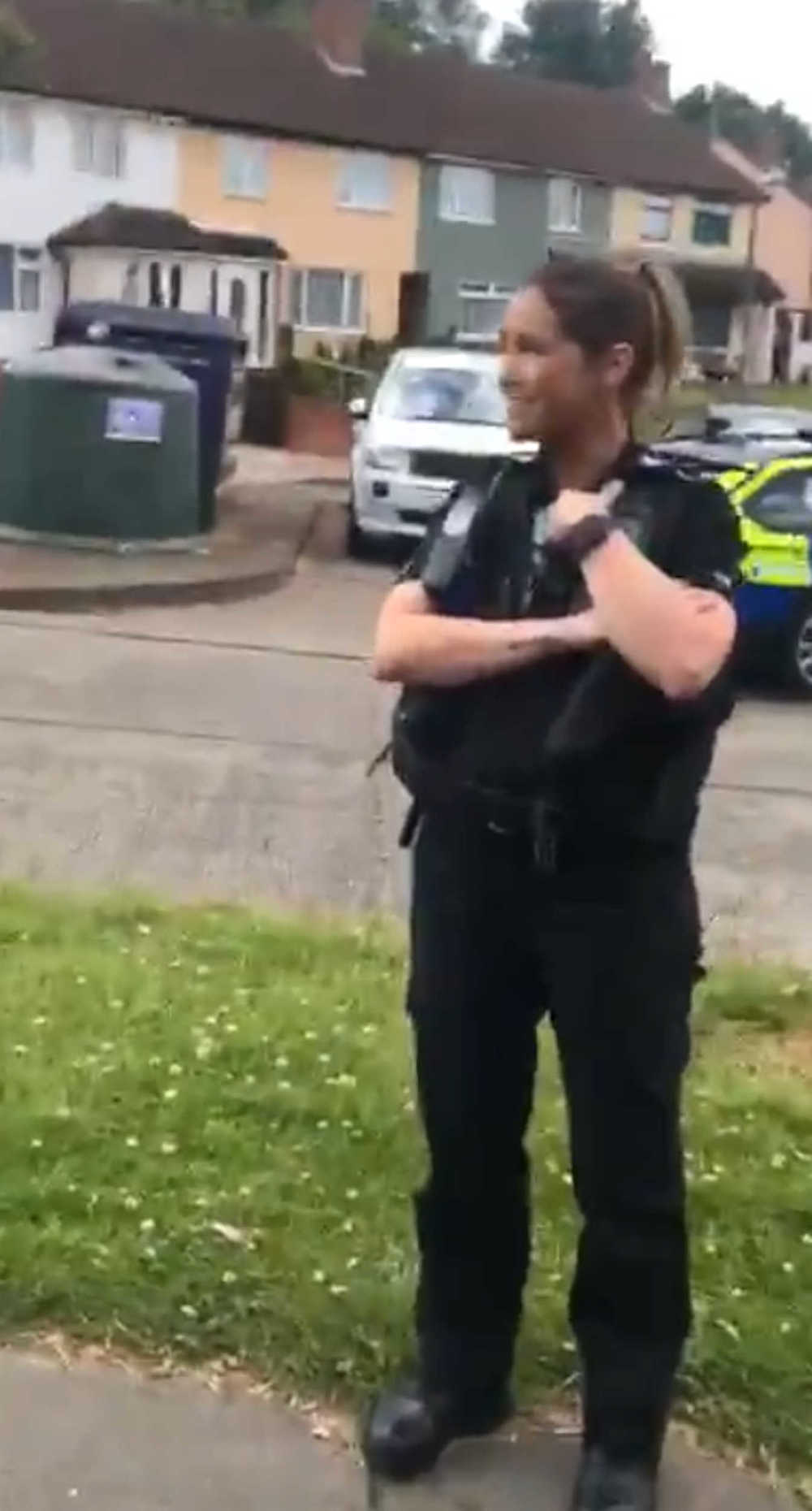 “It’s suspicious to walk from your car to your house, while black. The UK is not innocent.”

The post, which has been viewed more than 700,000 times has angered people.

Shannon Samuda wrote: “The female officer needs to be sacked.

“This is how your police operate ? Laughing in people’s faces and belittling the black lives matter movement. Disgusting behaviour!”

@Just_Lola_so said: “The woman officer should not be interacting with civilians, she doesn’t know how to conduct herself and she was very very inflammatory as well as condescending.”

And Leon Ward said: “Nah Suffolk Police you need to sort this out. March them to the doorstep for an apology. Then, retrain them.”

Speaking today, Maja explained: “My parents went to pick up my mum’s car from being serviced, and when they came back they glanced at the police car before getting out of their cars and going toward the house.

“The police stopped them on the grounds that they glanced at the car and were ‘driving a motor vehicle on the road’.

“So really it’s just everything in the video. There wasn’t much more to it.”

Suffolk Constabulary confirmed they are investigating the footage.

“Having looked at the issues raised by a large number of people, particularly regarding certain comments which were made on the video, we would like to apologise for the offence these have caused.

“The constabulary is very aware of the depth of feeling surrounding the events of the last few weeks and the issues of racism in our society.

“We always try to ensure we police all our communities with dignity, respect and fairness. Where those values are not met we will do everything we can to learn from that.”