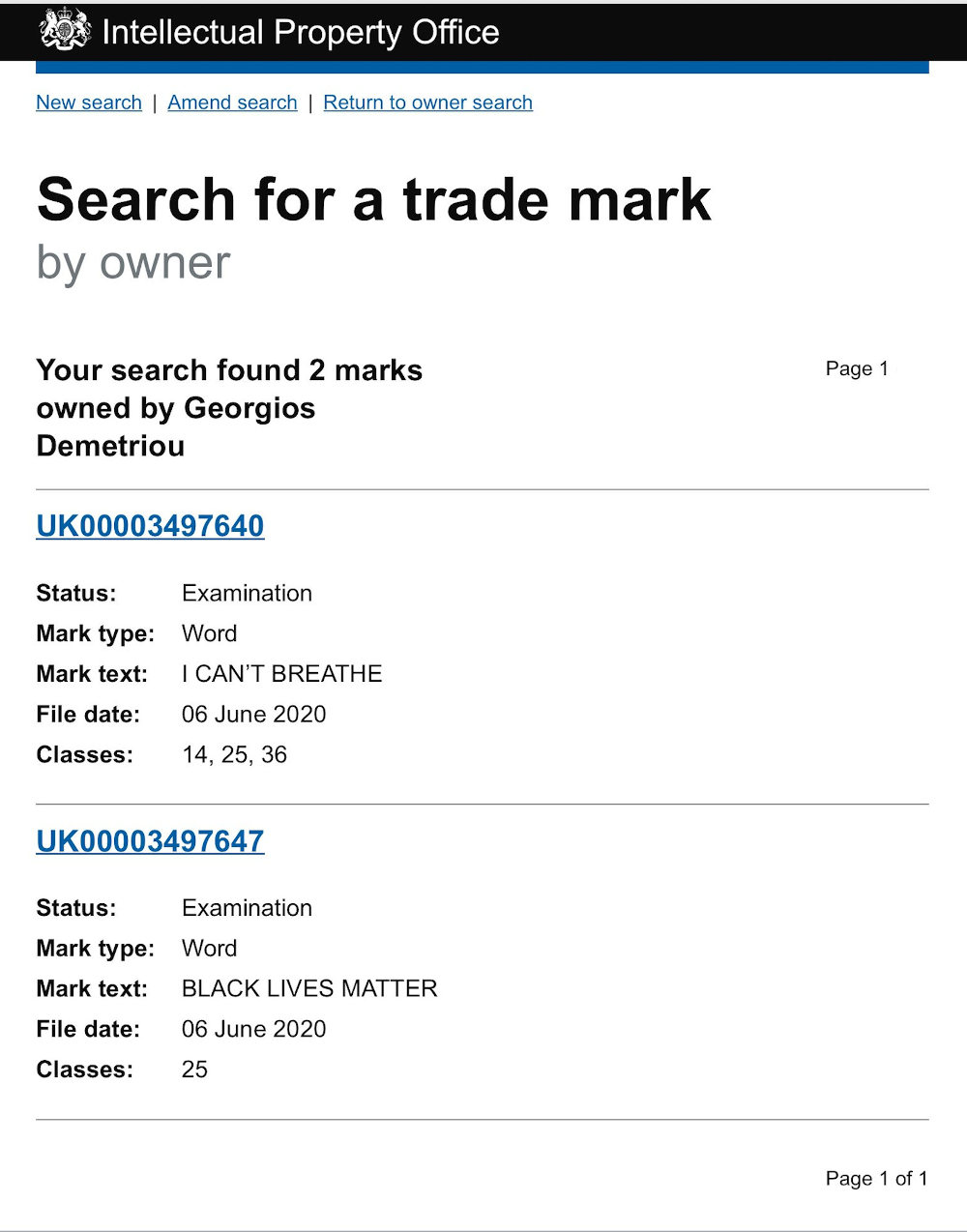 A BUSINESSMAN has been slammed after it emerged he has lodged applications to trademark the phrase “Black Lives Matter”.

Georgios Demetriou, from Manchester, made applications on 6 June to trademark the phrase associated with the protest movement.

The 57-year-old is also attempting to trademark the phrase “I Can’t Breathe”, the final words of George Floyd, who died at the hands of police officers last month.

However, Demetriou’s application states that the trademark will be for “charitable work” and today confirmed this is his intention.

In spite of this, many, including MP for Streatham Bell Ribeiro-Addy, have opposed the decision. 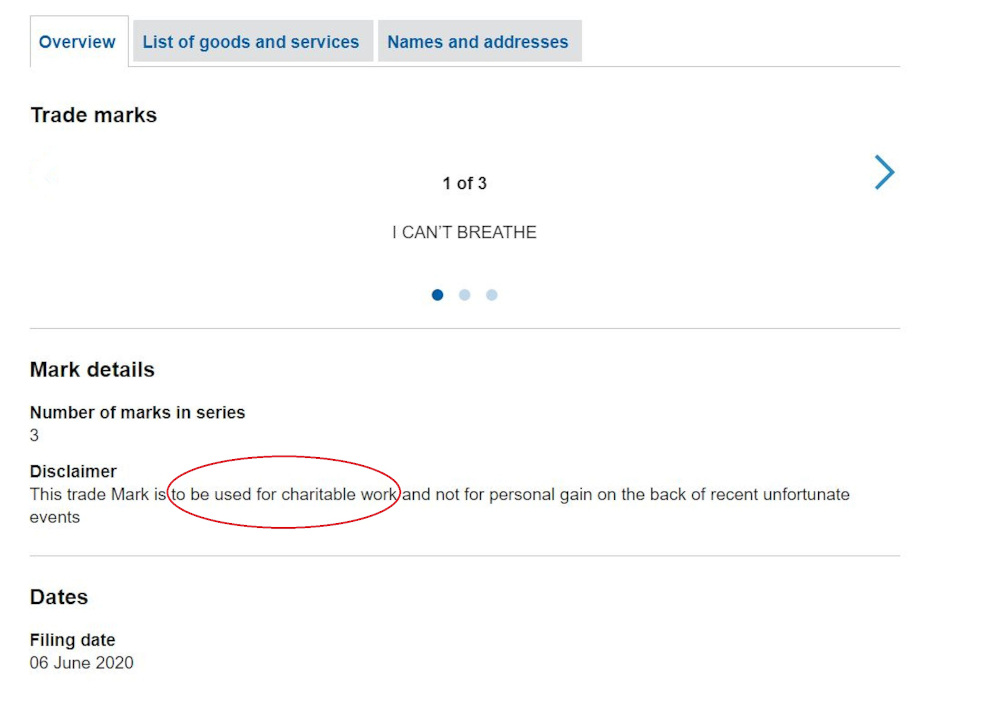 The applications were brought to the attention of social media users by Cllr Pav Akhtar, who is a local councillor for Preston, Lancashire.

He tweeted a photo of the applications yesterday [15 Jun], captioned: “What never ceases to amaze me is peoples’ capacity to exploit Black lives to make money.

The image shows both applications, under the request for “I Can’t Breathe” is a disclaimer which reads: “This trade Mark is to be used for charitable work and not for personal gain on the back of recent unfortunate events.”

The tweet, which has been liked more than 5600 times, prompted outrage from social media users.

Akhtar Takhsin wrote: “What kind of person tries to trademark an entire social movement for racial justice to try and secure ‘royalties’ from the very real and systemic suffering of black people?

“The pain of racism is real. It isn’t a trademark to profit off whatever tenuous attempt to justify it is.”

And Grace Pinnock said: “As I have said before and I will say it again, the only purpose black people serve in the minds of some folk who are not black is to profit at their expense, but black people must not profit in their own interest.

“This is what we have fought against for years.”

Following the furor, the government’s Intellectual Property Office (IPO) weighed in, pointing out that people have the option to oppose applications. 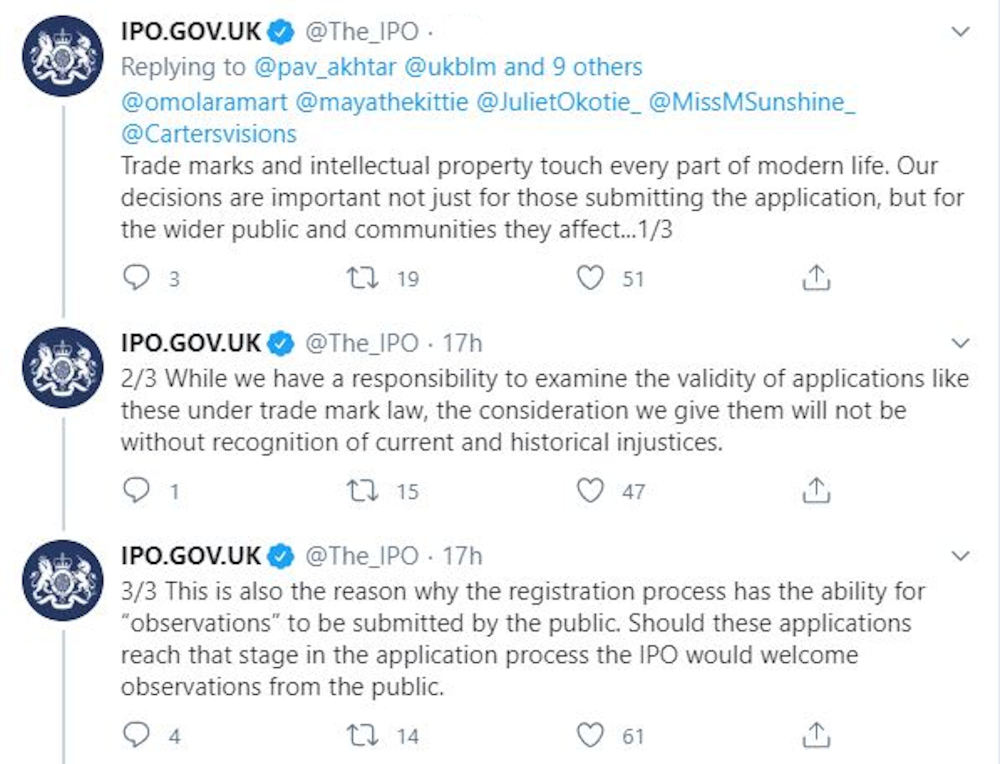 They wrote: “While we have a responsibility to examine the validity of applications like these under trade mark law, the consideration we give them will not be without recognition of current and historical injustices.”

The 42-year-old said: “I think if the IPO was to do anything but reject this application there would be uproar.

“It is just outrageous. People have no sense of shame.

“Black lives are already commercialised but this is beyond commodification. It’s repackaging black pain and selling it back to black communities.

“I was genuinely shocked at the depravity of commodifying a dying man’s words, it’s obscene.

“I’ve seen that he has claimed that he will be using the money to fundraise for ethnic minorities in Manchester.

“Firstly, when you look at who is doing this, you’ve got a white man who does not appear to mention racism anywhere else.

“And secondly, if you’re serious about helping black people then why are you not amplifying black voices? Have you actually asked any black people if this is what they want?

“There are numerous black-led organisations such as Black Lives Matter already working and fundraising within these communities.

“Bell Ribeiro-Addy was brilliant and immediately lobbied the IPO and has conveyed the strength of feeling.

“Because for some people, it will just be a case of ‘that’s rude and disrespectful’, but for black people it’s exploiting real and deep pain.”

Speaking today, Mr Demetriou stood by his decision, explaining he had signed a declaration to ensure the money would in fact go to charity.

He explained: “The money would be used for underprivileged black and minority inner city kids.

“It’s about taking this message and giving it back to the people.

“Why should people be able to take this poignant message and go and print it on T-shirts which are then sold on Amazon for profit?”

He confirmed he had not been in contact with Black Lives Matter or the family of George Floyd, yet as his trademark is currently “hypothetical.”

He explained: “If we are successful, which I don’t think we will be, I would have no problem in giving it to Black Lives Matter or another organisation.

He also revealed his business had been the subject of threats.

He added: “I’ve had people ringing up saying they’re going to burn the shop down, but they are completely off the mark.

“When you think about it makes sense, it’s about bringing profit back to the people and creating opportunity and equality in our community.”