NHS England has been accused of “utter treachery” after it emerged they are prematurely ending covid-19 contracts for student nurses, leaving many unemployed.

More than 25,000 student nurses signed up for the roles in April, having been promised six months of paid, full time work as part of an extended placement.

Many of the students say they even turned down part time work to take up positions working on the frontline.

However, NHS England announced a few days ago that it could only afford to keep the contracts going until the end of July.

Lead organiser for Nurses United UK Anthony Johnson, said the “disgusting” decision is typical of the way student nurses are treated throughout their studies.

The 27-year-old explained: “I know students at Brighton University who turned down work to take up these placements, and now they have just reneged on the jobs and they won’t be paid.

“Student nurses are not all young, they have families and mortgages to support. And if there is a second peak, we’re going to be asking them to get involved again.

“It’s ridiculous the way we treat student nurses. Most people leave the profession after two years.

“I think around 140,000 nurses are over 45 and will be able to retire in the next ten years and what are we going to do if people keep being treated like this?” 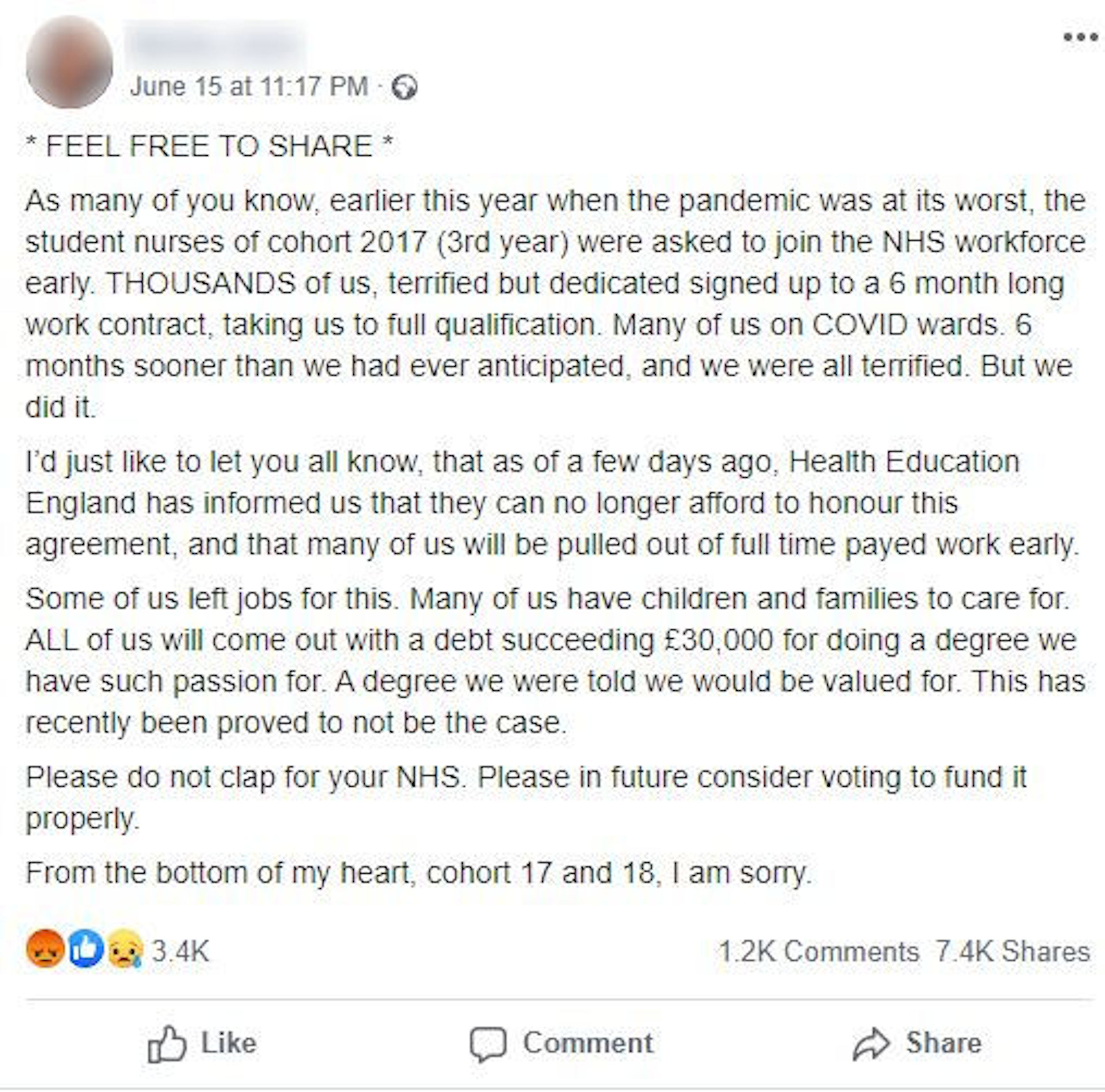 One student nurse, who wishes to remain anonymous, took to social media to share her heartbreak over the decision.

She described how “terrified but dedicated” students signed up to work “six months sooner than anticipated”, with some working on Covid wards.

Describing the impact of the decision, she wrote: “Some of us left jobs for this. Many of us have children and families to care for.

“All of us will come out with a debt succeeding £30,000 for doing a degree we have such passion for. A degree we were told we would be valued for.

“This has recently been proved to not be the case.”

The status, which has been shared more than 7400 times, has prompted outrage from social media users.

Carol Jackson wrote: “This should not happen. You should all be respected in the NHS. This needs a U-turn.”

And Lorna Dunipace said: “These students stepped up (scared) to support the NHS and they are repaid with unemployment. We should hang our heads in shame.”

Speaking today, the 21-year-old mental health nurse said: “My contract was to run until October.

“I didn’t know where they would send me. I just wanted to help.

“There was Covid at the hospital I was working in. I decided now I would be salaried early, the safest option would be to move away from my parents and rent my own property.

“We’ve since been told funding has run out.

“Understandably, I am thinking I might lose my house and put my mum as my guarantor in debt.

“It just feels like we’ve been hailed as heroes and then treated as though we are disposable.”

NHS England confirmed to Nursing Notes that students would be paid for their hours on placement.

An NHS England spokesperson said: “Every member of NHS staff, including those in training and returnees, have gone above and beyond during this pandemic, and all student nurses are required to complete placements during their training, and as part of the response to Covid-19 these hours have been paid for and will be until their placement ends.

“As the NHS begins to return to normal the focus is now on ensuring that these students complete their training, and nurses about to graduate that have been providing incredible care over the last few months will be prioritised for roles in their current trust.”