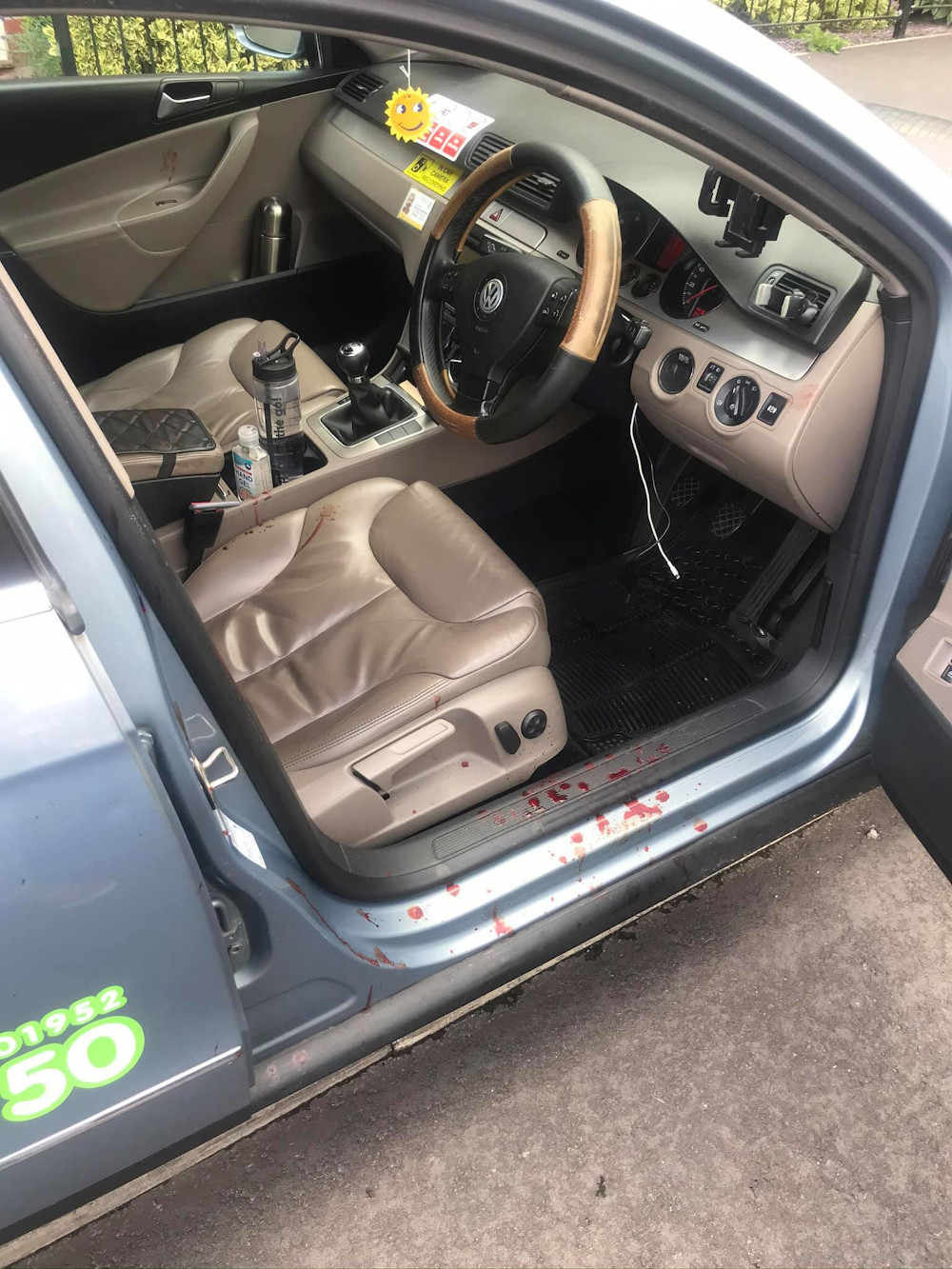 A TAXI driver has shared horrifying images of his blood spattered cab following an alleged racist attack by a passenger.

Amir Malik, from Telford, Shropshire, posted the images following the assault on Saturday which left him requiring hospital treatment.

The father-of-two says he was clobbered by a passenger wearing a knuckle duster, who called him a “P*** b******”, before splitting open his eyebrow and pulling out his hair.

Photos show the driver’s side of Amir’s car covered in droplets of blood, as well as the car’s spattered leather interior.

Photos of Amir, 37, taken after the attack also show his blood-soaked joggers and shoes.

He also shared an image of him lying in a hospital bed with a bandage across his head.

Amir posted the photos along with an emotional post about the attack on Monday [6 Jul].

He wrote: “This incident happened last night when I was driving a daily taxi and I was badly attacked.

“I call this incident against humanity. I work hard to support my family But after this incident, I think we foreigners have no value in this country.

“There is no value in our lives, whatever the heart does to us.

“I will never forget this tragic event in my life.

“Many taxi drivers like me work very hard So that he can move forward in life and do something for his family. But in our society, a taxi driver has no respect and no value in his life.” 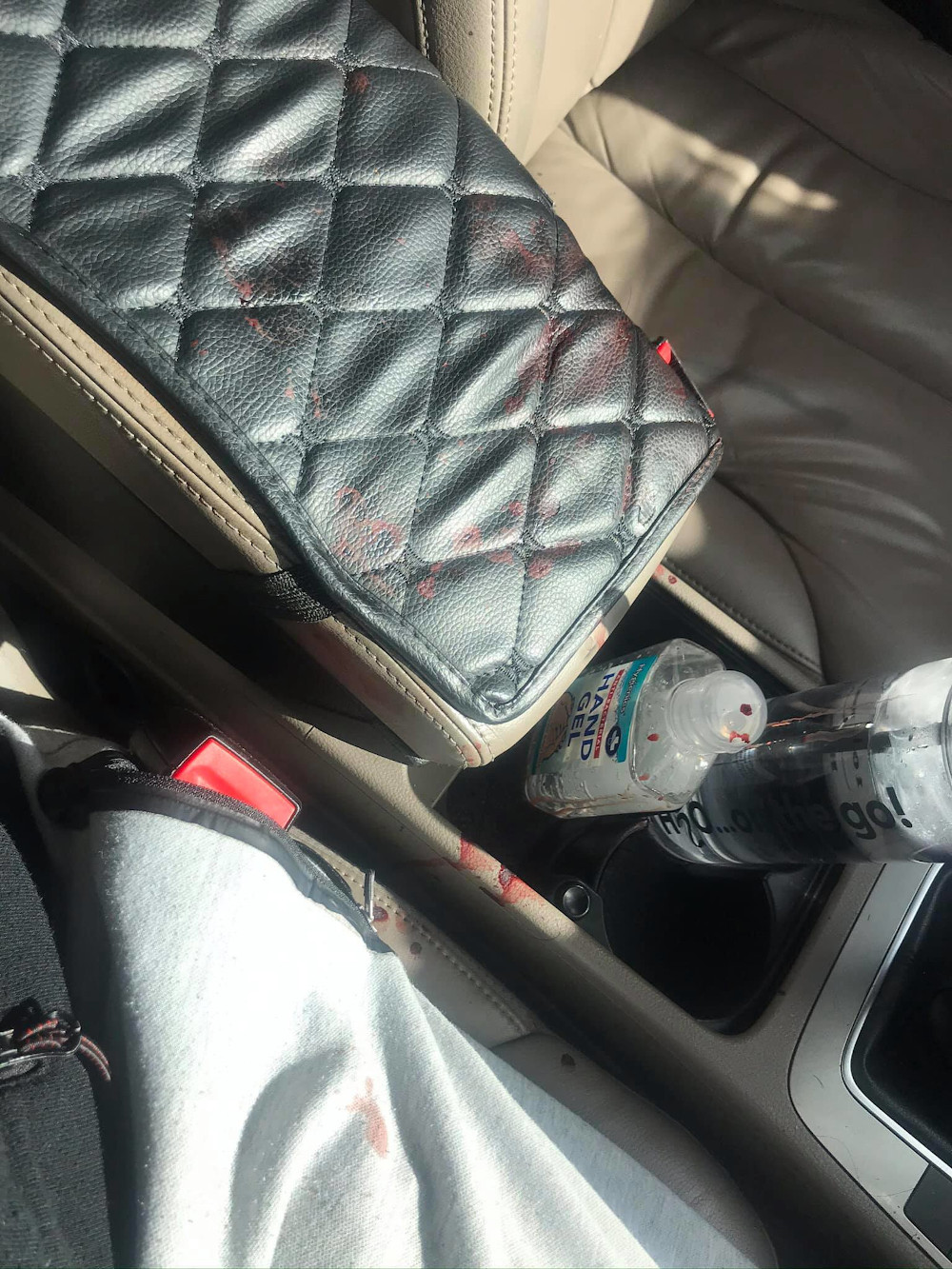 Gary Tinsley wrote: “That’s terrible mate if there’s anything I can do for you at all just let me know.”

Speaking today, Amir confirmed he was making a recovery but still in pain.

He said: “I picked up three lads on Saturday and I told them they had to pay in advance of the journey.

“The guy in the front got aggressive and started shouting at me and I explained it was a policy.

“He said okay, so I put my hand on the steering wheel and then he hit me on the side of the face.

“He was wearing a knuckle duster and it cut me and I started losing blood. I think I lost maybe a litre.

“He came around the driver’s side and hit me again, he grabbed my hair and pulled it out in his hands.

“He wanted to kill me.

“Eventually they left and I called the police. They put me in an ambulance and I had my eyebrow glued and nose x-rayed.

“I went home and tried to hide my face but my children could see and they were crying asking me to get a different job. My 8-year-old was too scared to look at me.

“It was a racist attack, I just wonder why must Asian taxi drivers face this?

Police say they are now appealing for information.

A West Mercia Police spokeswoman said: “We were called at around 3.30am on Sunday 5 July to reports that a taxi driver had been assaulted on Sorbus Avenue in Telford.

“The victim, a man in his thirties, had been to the address to pick up three men and take them to Admaston.

“One of the passengers assaulted the driver leaving him with injuries to his face. The man who carried out the assault was described as bald, he and the other passengers were described as white, in their twenties and wearing dark clothing.

“Anyone with information is urged to contact police on 101 quoting incident 157 of 5 July or call Crimestoppers anonymously on 0800 555111.”