Dundee United have given their formal backing to two fans who plan to walk from Tynecastle to Tannadice to raise funds for the club’s legal battle.

United, Raith Rovers and Cove Rangers appealed to fellow clubs and supporters on Monday for donations after conceding that fighting Hearts and Partick Thistle’s attempts to deny them promotion had already cost a combined £50,000.

Both Hearts and the Jags took legal action in a bid to reverse their controversial relegations from the curtailed SPFL season. 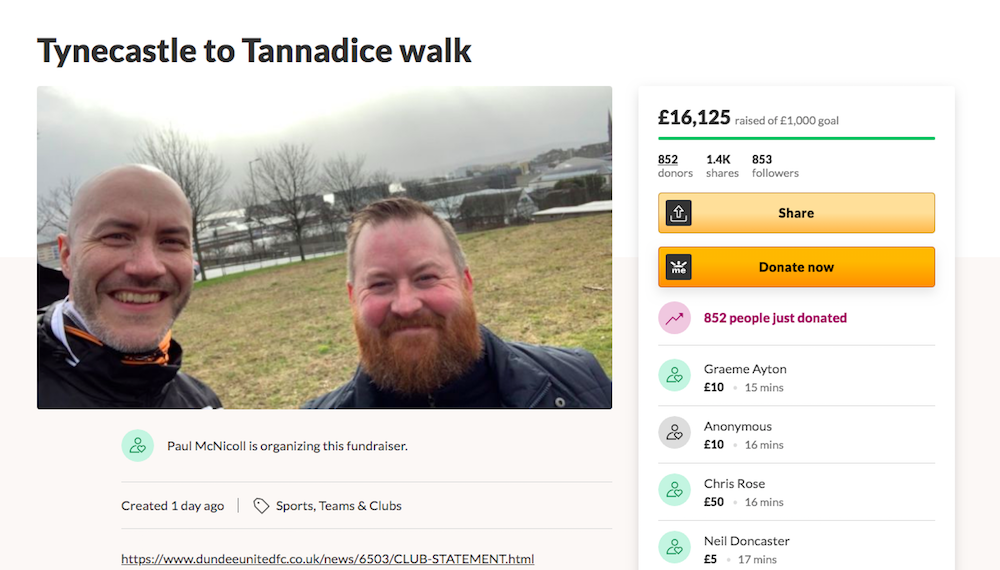 The case has been referred to a Scottish FA arbitration panel by the Court of Session, with the legal costs expected to rise to £150,000

United had planned to launch their own crowdfunding campaign but they have now thrown their weight behind supporters Paul McNicoll and Andy Crichton, who will walk the 56 mile route on July 18.

As of Thursday afternoon, the pair had already raised raised over £16,000 through GoFundMe.

A United statement read: “As mentioned in our statement on July 6, the club had intended running a crowdfunding campaign to try and raise some funds to support the legal costs involved in this case.

“However, since then, two of our supporters, Paul McNicoll and Andy Crichton have set up a GoFundMe campaign to raise money to help the club.

“They are planning to walk from Tynecastle to Tannadice on Saturday 18th July to highlight the situation that Dundee United finds itself in, with all monies raised being donated to the club’s legal fund.

“Having discussed matters with Paul and Andy, the club is now formally endorsing their campaign and we are going to provide them with the support to make it as successful as possible.

“We will also arrange an event at Tannadice to welcome them on their arrival on Saturday evening.

“The event will have to comply with all current social distancing regulations and be restricted to invited guests with tickets but we hope to get as many supporters as possible in attendance to celebrate their effort. Further details will be provided in due course.

“In a continuing show of solidarity in defence of the case, we have had discussions with Raith Rovers and Cove Rangers and they will also be participating in this event with their own supporters running similar crowdfunding campaigns, and organising a walk from their stadiums in Kirkcaldy and Aberdeen to Tannadice on the same day.

“As well as hundreds of Dundee United fans making donations, many fans of other clubs have shown support to this cause, highlighting the impact this case is having on the whole of Scottish football.”