JOHN McGLYNN reckons the return of Craig Gordon to Hearts is proof his old club mean serious business next season.

The Raith Rovers boss is relishing the prospect of coming up against the Tynecastle outfit when the league action resumes for the Championship in October.

The 58-year-old was coach at the club for a decade before taking over as manager for a 15-month spell from June 2012.

He watched up close as Gordon come through the ranks in Gorgie before being sold in a record £9 million move to Sunderland in 2007.

And, as he looks forward to Rovers’ return to action, McGlynn has no doubt the Jambos will be an even tougher nut to crack with Gordon back between the sticks.

McGlynn said: “Hearts are a massive team in the league and if you were going by what happened the last time Robbie was there; they did exceptionally, considering the strength of the league at that time with Rangers and Hibs in it.

“It was a really, really competitive league and a tight league with high standards but they won it.

“Hearts are going to be big, big favourites, of course they are, and it’s up to everybody else to try to make it extremely difficult.

“All the teams will try to do that, but you see their intentions with them signing a goalkeeper of the quality of Craig Gordon’s calibre.

“Having known Craig and worked with Craig all the way through the youth ranks at Hearts, and with what he’s done in the game, he can win games himself, by getting clean sheets.

“That was a massive statement from Hearts, them making that signing.”

Gordon is reaching the twilight years of his career but McGlynn is convinced age will be irrelevant to the former Hoops number one’s on-field displays.

He added: “His age is irrelevant, he’s a young 37. The couple of years he had out with his knee injury will not have done him any harm, in terms of extending his career playing football.

“He was a really, really skinny boy and he’s kept that physique all the time, so he’s not carrying any weight.

“He’s still very agile and, being at Celtic in the last few years, he’s been part of a team that’s been winning trophies all over the place.

“And that winning feeling and winning attitude you take with you, wherever you go.

“That’s what all the other teams are up against.” 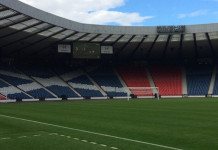