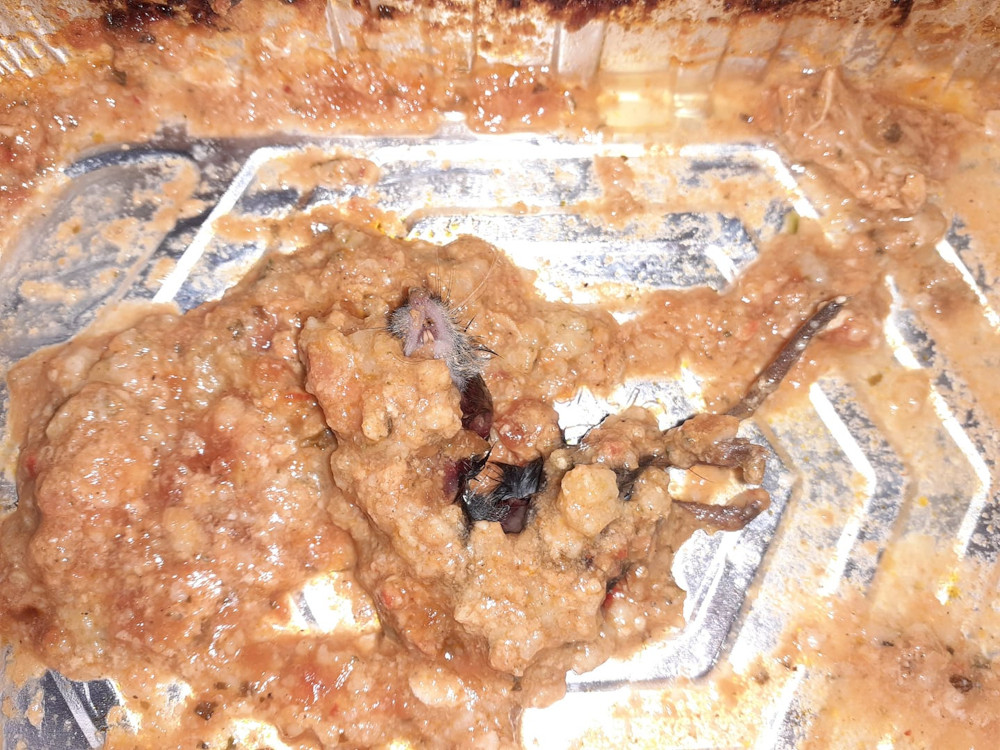 TESCO are investigating after a shopper shared sickening photos showing a dead mouse she allegedly found buried in her ready meal.

Cath McCall Smith, from Durham, said she was left “vomiting for 12 hours” after apparently making the grim discovery as she was tucking into the £3.75 tray bake.

The 57-year-old explained how she initially believed she had hit a piece of bone, but was instead left horrified when she looked down and saw the face of a dead mouse staring back at her.

Revolting images show the vermin lying face up apparently in the remnants of her Italian Inspired Chicken meal.

The creature’s face peers out showing its protruding, jagged teeth and whiskers.

Tufts of matted fur, as well as a tail and a paw are also seen sticking out.

The animal seems to have been squashed and looks to be covered in blood.

She posted the pictures to the retailer’s Facebook page with the caption: “Please do not buy any ready meals from Tesco’s.

“What I found in mine has had me vomiting for 12 hours.”

She then posted the series of photos apparently showing the rodent covered in leftovers.

Explaining what they showed, she stated it was: “A mouse in my ready meal.”

Despite the gory images, social media users cracked jokes about the situation.

One user said: “Well it does say ‘Italian Inspired’ and the Romans considered dormouse to be a delicacy.”

Another added: “Poor Ratatouille” in reference to the Disney film about a rat who learns to cook.

Speaking today, Cath said: “I thought I had hit a bit of bone.

“I moved the chicken around and was horrified when I saw it.

Yesterday [Wed], Tesco said they were still investigating the incident.

A spokesman for Tesco said: “We take all customer complaints very seriously and are carrying out a full investigation into what happened here.”