SCOTS are continuing to hop on their bikes even as lockdown eases, according to new figures.

The data from Cycling Scotland, reveals that July saw a 44 percent uptake in cycling, compared to the same time last year.

The first figures to be released since Scotland entered phase three of lockdown show a continued increase in cycling across the nation.

Data from 46 of Cycling Scotland’s nationwide automatic cycle counters was reviewed, to draw the comparison.

It dound that in ten locations, there was increase of more than 100 percent with Irvine and Lenzie recording the greatest increases.

The information was collected as part of the National Monitoring Framework, managed by Cycling Scotland and funded by Transport Scotland, to monitor cycling rates across the country.

Cycling Scotland Monitoring and Development Officer, Natalie Cozzolino, said: “We were concerned that the progressive lifting of many lockdown restrictions would lead to a big drop in the number of people cycling so it’s encouraging to see that although there’s been a decrease in July, the nation’s renewed interest in cycling is still continuing.”

Cabinet Secretary for Transport, Infrastructure and Connectivity Michael Matheson added he was “pleased” to see a higher rate of cycling.

He also outlined initiatives in place that might help more Scots get in the saddle such as The Scotland Repair Scheme, which encourages people to bring old bikes onto new temporary cyclcing infrastructure.

He added: “At the same time, we’re also supporting access for people who don’t own a bike – and this week Glasgow City Council confirmed their public hire scheme will continue to offer free travel until spring 2021 thanks to funding from the Scottish Government.

Cycling Scotland has been also piloting a new Essential Cycling Skills course to help families build the skills and confidence to cycle safely.

The 2.5-hour sessions – which are free until the end of August – are delivered by experienced instructors who can tailor the course contents to the specific needs of the family.

Support worker Paula Wyllie 35 and her children Maya 13, Ava 11 and Ben 9, from Annan in Dumfries and Galloway, attended a session in July.

Paula said: “We thoroughly enjoyed Cycling Scotland’s Essential Cycling Skills course. Our instructor, Josh, was friendly and made the session fun. He was informative, explained things clearly and answered all our questions.

“We now feel more confident when out cycling as a family.” 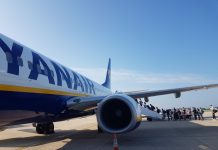