New Hearts signing Andy Halliday: ‘People might think I am an a*******, but when I’m on that green grass I just want to win by any means necessary’

ANDY HALLIDAY reckons he might have altered a few people’s opinions of him when he got his football fix during lockdown by trying his hand as a pundit.

But Hearts’ new signing insists he has no plans to change his on-field persona as he bids to drive the Jambos to success this season.

The 28-year-old took his time to mull over his options following his departure from Rangers in the summer and, after doing the rounds on football shows during his lay-off, joked that a couple of those were in the media.

But, whilst he enjoyed the experience and at least some of the feedback, the former Livingston and Middlesbrough player is desperate to get back down to the real business after penning a two-year deal at Tynecastle this week.

He said: “When I say I had a couple of options for my next move, two of those were media outlets! But, to be honest, I really enjoyed it.

“I hadn’t trained since March 20 and to go six months without doing anything, anyone is going to be bored. So, when I got offers to do some media work, I took them and really enjoyed it. I love football and to get the chance to talk about it and watch it was enjoyable.

“Moving forward, it might be something I look to do at the end of my career. I am doing my coaching badges too so I will keep my options open, but I did enjoy the media stuff.

“Will I forgive pundits for slaughtering me now? No matter where I go, I will get slaughtered! But I don’t mind.

“I have actually had a lot of nice messages. People were saying to me, if you excuse my French, ‘Oh, you aren’t an a*******, you are actually alright! 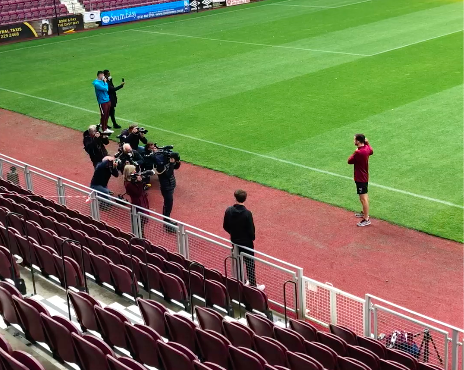 “Look, if people got to know me on a personal level and like or don’t like the way I talk, then it’s a matter of opinion. I am just passionate about football and I like talking about it.

“People might think I am, but when I’m on that green grass I just want to win by any means necessary. It’s just having that competitive nature I suppose.”

That winner’s streak is something Hearts manager Robbie Neilson is hopeful Halliday brings to Hearts and the player himself, after five years with boyhood heroes Rangers, reckons the Gorgie men will need it in spades this season as they deal with being the top dogs in the Championship.

He added: “The challenge of getting back to the top-flight at the first time of asking appeals and I think also just the expectation to win every week. That’s something I’m used to and something I enjoy.

“Obviously, it’s going to be very difficult to win every single game but we’ll certainly put those pressures and standards on ourselves. I’ve already seen from some of the experienced boys they’ve got the standards they drive day in, day out, and I’m going to be a part of that as well.

“It’s a strong squad and I have signed a two-year deal. The main objective is to get back to the Premiership. But moving forward, if we can still keep a hold of the spine of the squad, there is quality there for further ahead.”